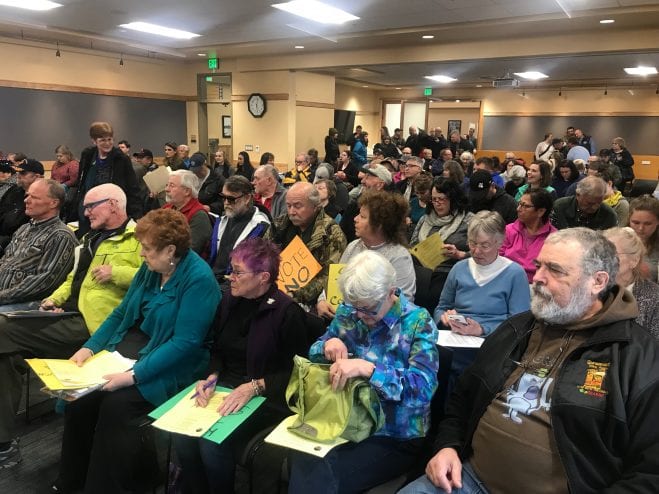 The Assembly Chambers were full on Tuesday night (04-24-18), with Sitkans coming out to testify on two tax proposals. The one to turn the senior sales tax exemption into a rebate program for low-income seniors passed. (Emily Kwong/KCAW photo)

In an effort to fund the City of Sitka, the local Assembly is looking at taxes. And on Tuesday night (04-24-18), they made a big decision. By a 4-3 vote, the Assembly approved eliminating the senior sales tax exemption and replacing it with an rebate program for qualifying low-income seniors. Through the highs and lows of passionate debate, with over 40 citizens testifying on this single ordinance, Sitkans of all ages are feeling the pinch.

The meeting went on a break at 11:30 p.m. Tuesday night and continued Wednesday night at 6 p.m., with nearly a dozen agenda items left. That includes money for bulk water infrastructure, a landslide study, land disposal laws, and a discussion on the Sitka sac roe herring fishery. We’ll have more on Raven News at 5:18 p.m. tonight.

By the sound of it, you can probably tell this meeting of the Sitka Assembly was packed. The vast majority were there to weigh in on a single issue, making the senior sales tax exemption needs-based instead of broad based.

What does that mean? For some, like Sam Skaggs, Susan Brandt-Ferguson, and Levi Albertson, it means more money for Sitka’s future.

Skaggs: I just turned 65. I support any exemption here because we have to raise revenue for our schools. That’s the fabric of our community.

Susan Brandt-Ferguson: Soon, Sitka’s population will be 20% or more seniors. I don’t believe our city can afford to offer this exemption to all seniors any longer.

Albertson: Most of the people I know that have been pushed out of Sitka due to economic circumstances have been young families who are offered no economic relief from the city.

As of 2017 census data, 16% of Sitkans were over 65 years of age. Ordinance sponsors Kevin Knox and Bob Potrzuski argued that such a large and growing portion of the population could not forgo paying the sales tax any longer. Their memo noted the City and Borough of Sitka has gone without $6.5 million in sales tax revenue from senior citizens over the last five years. 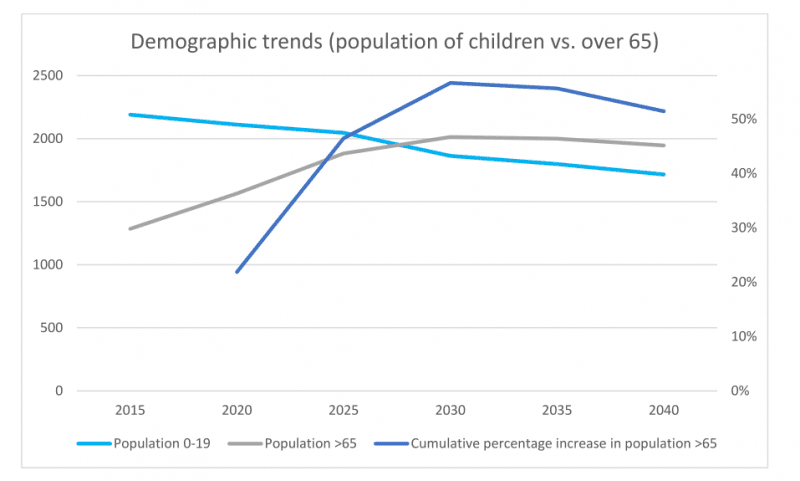 Sitka’s population is aging, a “silver tsunami” projected in many other communities in Southeast. In 1996, six percent of Sitkans were senior citizens. In 2015, that number had risen to sixteen percent. (Chart provided by Knox and Potrzuski)

But many testifying didn’t see the logic and implored the Assembly to look for revenue elsewhere. Several said passage of the ordinance would create hardship for seniors on a fixed income, who use their exemption card to get by in a town where the cost of living is on the rise. Many felt the rebate program, as designed by the ordinance sponsors, would leave non-qualifying seniors in a lurch. Others were skeptical the Assembly would raise the money it expects  (an estimated $500,000 in the first year) and anticipated removing the exemption would drive seniors to shop online or out of town. 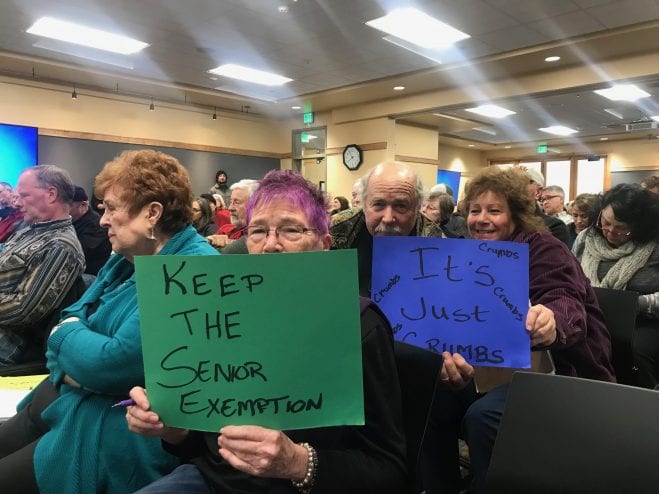 Many of those testifying against the ordinances were senior citizens themselves. Grace Larsen stood before all seven family members, six of whom are under 65, a yellow sign that said “Seniors Do Count.” (Emily Kwong/KCAW photo)

The Mayor capped testimony at two minutes, so many had the modify their plans to speak for the typical three minutes.

Some, like David Sam, expressed their anger outright. “What we are talking about here is respect: respect for the elders in the community and giving thanks for what they have brought us. And you want to take, you want to assault, the elders in this community?,” Sam asked to Assembly.

The senior sales tax exemption was introduced in 1975 and has come up twice, in 2012 and 2015, for an overhaul when the Assembly was searching for ways to raise revenue. The rebate idea has been debated before, but never got the Assembly’s approval until now.

Shirley Robards has been its longtime defender and this time, gathered 800 signatures calling for it to be kept. Another petition calling for its removal, put forward by John Stein last meeting, had approximately 380 signatures. Robards told the Assembly Tuesday night, “I think this going to send everybody out of town to shop.”

After nearly two hours of public testimony on this issue, the Assembly took a break and came back for debate.

There was conversation at the table about voting the ordinance down to workshop it further, but no motion was made or seconded. When the time came, the vote was close, 4-3, and the ordinance passed as written.

Voting in favor was Mayor Matthew Hunter, ordinance co-sponsors Bob Potrzuski and Kevin Knox, and Assembly member Steven Eisenbeisz. Voting against were Assembly members Richard Wein, Aaron Bean, and Ben Miyasato. Each offered different explanations for their vote, except for Eisenbeisz, who didn’t offer comments during Assembly debate. When he gave his approval, there were audible gasps from the crowd.

The ordinance will take effect in July. The rebate program would begin next year. Seniors can apply for it by submitting applications to the finance department between January 1, 2019 and March 31, 2019. They’d get their rebate check in July, which amounts to $350 for a single senior in a household and $450 for two senior in a household. See ordinance details here: Ord 2018-14

Though Assembly members and the public differed on what to do, there was one area of overlap: that Sitkans are struggling — young and old, newcomers and those with long legacies.

Brinnen Carter asked the Assembly, rhetorically, “Is the revenue collection fairly balanced among the citizens?” Mayor Matthew Hunter thought not. He felt the senior sales tax exemption proposal, though unpopular, was a way to spread Sitka’s needs more evenly across it’s population.

Hunter compared the Sitka of today to that of 1980.

“The take home pay has doubled in that time. The housing cost has quadrupled, conservatively. So it’s twice as hard to get started now, as it was then. We have our future and our present and our past all come together in one conversation tonight.

The room was a blend of those age groups and perspectives, the mood swinging between feisty indignation and somber seriousness and neighbor visiting with neighbor during the top-of-the-hour breaks.

While the Assembly did vote through one tax measure, they voted down the other – a proposed 3% severance tax on natural resources like fish and rock – on first reading. Not a single citizen, many of them fisherman and seafood processors, came out in support. The Assembly voted it down on first reading 6-1, with Assembly member Aaron Bean voting in favor.

In a previous version of this article, KCAW reported incorrectly that Assembly member Aaron Bean against the severance tax. He voted in favor.