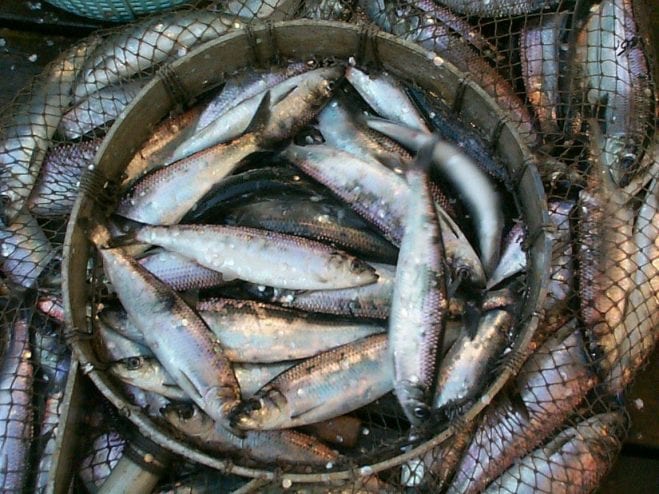 Assembly member Aaron Bean wants a moratorium on the Sitka Sound herring harvest until 1) the state declares herring a “forage fish,” and 2) a different management model is adopted. He told fellow members that he’s failed to meet his subsistence needs 8 out of the last 10 years. (KCAW file photo)

The Sitka Assembly has formed a committee to draft a resolution which may call for a moratorium on herring fishing in Sitka Sound.

The move comes after the failure of this spring’s commercial sac roe fishery, which fell over 8,000 tons short of the expected harvest level.

The idea of a commercial fishing moratorium has been around for a long time, backed primarily by the Sitka Tribe and other subsistence users concerned over declines in the local harvest of herring eggs.

Assembly member Aaron Bean has commercially fished for other species around Sitka, and is now actively running a charter boat, but he identifies as a herring subsistence harvester. He proposed drafting a resolution asking the Alaska Board of Fisheries to impose a moratorium on the commercial sac roe fishery until it reclassifies herring as a “forage fish” under state law, and adopts an ecosystem-based management tool, as opposed to what he called the “single species maximum sustained yield model.”

Clearly, herring management is complicated. The Board of Fish spent nearly a week in January deliberating dozens of proposals for changes to the Sitka fishery. Several in the assembly audience thought Sitka’s local government was overstepping its bounds.

This is Wayne Unger, plant manager for Silver Bay Seafoods.

One of those biologists is Eric Coonradt, who runs the sac roe fishery in Sitka. He could barely contain his frustration over the information in front of the assembly, and the prospect of local political involvement in what is already an incredibly difficult job.

“This document is full of false information. And if this document is your sole source of information regarding the commercial sac roe fishery and how ADF&G assesses and manages this resource, then you’re being misinformed.”

ADF&G generates large amounts of data to support the harvest levels it sets for herring seiners in Sitka Sound — which it presents in a public, pre-season meeting in early March. But in this ocean of information, not everything floats to the surface. Permit holders and processors met privately and agreed in advance that this spring’s fishery would be a co-op — or non-competitive. Sitka Sound Seafoods manager Tim Ryan told the assembly that what appeared to be a harvest shortfall was actually just business.

“The industry knew going into this fishery that only 40-percent of the biomass that was anticipated to be harvested was going to be marketable. So even though we had an 11,000-ton quota, we knew that the maximum we probably would harvest would be 4,500 tons. We knew this going in.”

Nevertheless, there was pushback from others advancing an argument that this year’s fishery appeared to demonstrate: The department’s scientific model isn’t reliable, herring are in decline, and the stocks are at risk of collapse. Although several members of the public voiced opinions on this theme, the strongest remarks came from the table, when assembly member Ben Miyasato broke from his more reserved demeanor and explained why herring might actually be a political problem.

Miyasato, however, was willing to allow the moratorium sponsors more time to create resolution that could actually pass, as it was clear to all members that simply demanding a moratorium would be ineffective at best, and polarizing at worst. As important as the traditional subsistence harvest is to Sitka, the economic stakes of the commercial fishery are huge.

Mayor Matt Hunter didn’t want the assembly to put the interests of one user group ahead of another. He thought the resolution should be carefully crafted.

“I am ready to say something forceful to Fish & Game that says basically, Look at this closely, the City of Sitka is concerned. I don’t think there’s a person in this room who isn’t concerned. If there is someone who isn’t concerned, they don’t know what’s going on. Because everyone from our processors to our subsistence users and our fishermen have seen a disaster this year.”

Hunter called for the creation of a committee to pull together stakeholders and draft an informed, well-researched resolution that would reflect a broader consensus than a simple demand for a moratorium.

The resolution’s principal sponsor, Aaron Bean told fellow assembly members that he was fully aware that the body was not going to “slam down the gavel and end the (commercial) fishery.” He only wanted to win a “forage fish” designation for herring — before it was too late.

“When I look my children in the eye to say that, You know what guys? I did the best that I could, and here’s the evidence of that. I didn’t sit on my hands. I didn’t turn around and not pay attention as the resource was depleted and destroyed by the hands of just a few people — which is unfortunate. Let’s be honest, here. Herring are a forage fish. Everything in the ocean eats them. The (Fish & Game harvest) model does not provide for that. So, it’s not a big ask.”

Bean, along with fellow assembly members Richard Wein and Bob Potrzuski were appointed to the committee. They said they hoped to bring as many people to the table as possible to forge a consensus. “This is not allocative,” said Bean. “The idea is to get the forage fish designation.”