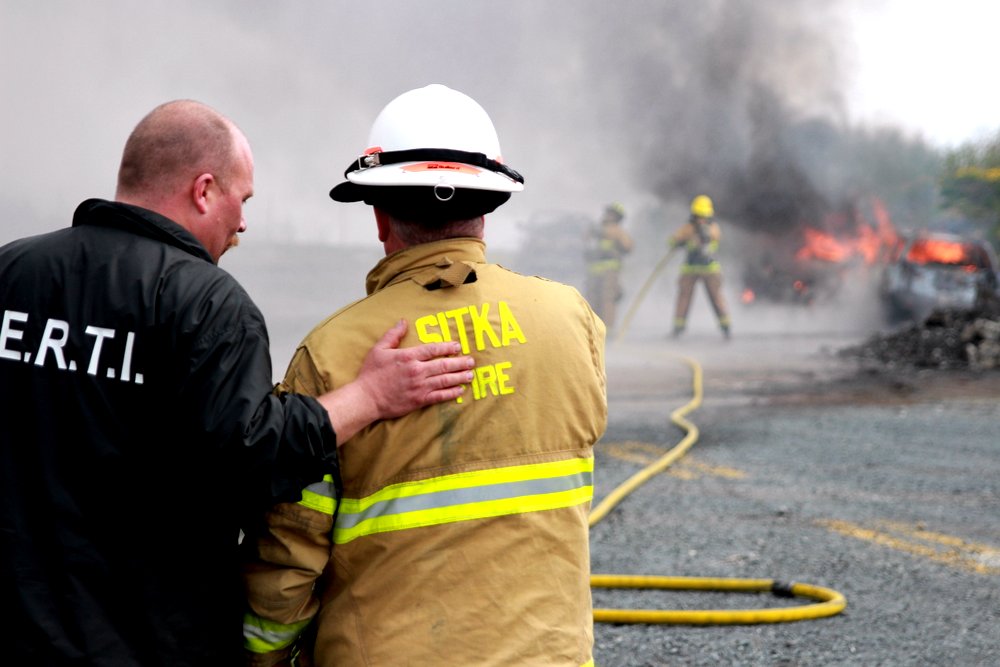 The smoke, sirens, and hazmat suits are real, but the scenarios are fictional, as agencies from around the state execute two full days of emergency drills in Sitka.

Note: Van Winkle 18 will conclude Wednesday afternoon, May 9. A few years ago, a similar drill “Orca” took place here. And finally, Alaska’s only Medal of Honor winner, Archie Van Winkle, was laid to rest in 1986 in Sitka National Cemetery.

I catch up with a CST team across from Spenard Builders Supply. Roger Bianchi, with Seattle’s Emergency Response Training Institute, shows me a ditch with some suspicious tubes and pumps emerging from it.

He’s designed this scenario to train responders to manage a toxic attack on the municipal water supply.

So this is a prop we’ve set up over here to simulate somebody contaminating the water supply. So the water department came out and said ‘This isn’t us, we didn’t do this.’ One of the citizens here called and said, ‘Hey what are you guys doing in my front yard?’ They said, ‘This is not part of us, but the water main does go through here.’ Fire and police came out and said it looks like someone’s messing with the water system, injecting something into the pipe. So the Fire Department requests someone who can secure this scene and tell us what’s in those tubs. The National Guard Civil Support Teams are here on site to accomplish that mission. 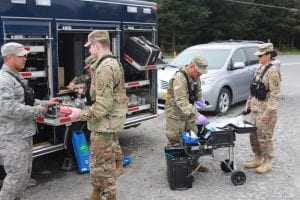 National Guard members from the 103rd CST prepare to test for contaminants at a suspicious location near Spenard Builders Supply on Tuesday (5-8-18). Although the scenario is fictitious, the soldiers should “get a hit” on a sample agent provided by the contractor for the exercise. (KCAW photo/Robert Woolsey)

The pressure’s on for the Army and Air Force personnel on the teams, because at least 30 simulated victims have already reported to Sitka’s hospitals with fictitious symptoms. The soldiers will now put on full hazmat gear and get to work.

Part of the beauty of this drill, Bianchi says, is that the CST’s will in fact test positive for… something. Bianchi is equipped with what he calls “handoff samples” of materials that the mobile lab can detect, without posing any risk to the public.

The soldiers have no idea what they’re getting into. He calls this type of drill, “the real deal.”

Bianchi is one of six staff members from the Emergency Response Training Institute who are orchestrating the exercise called Van Winkle 18, after Alaska’s only winner of the Congressional Medal of Honor. ERTI has set up simulated chemical labs, a homemade explosives lab, and touched off a simulated ammonia leak. They’ve even created a scenario that poses a threat to schools.

Shortly after lunch, they torched two cars for real in an empty lot near Sitka’s wastewater treatment plant. It took firefighters a surprisingly long time to douse the flames. ERTI’s Eric Olson, a Seattle firefighter himself, told me he started the fire with some pallets and “just a little bit of gas,” but that once they get going car fires burn very hot.
Besides the 103rd CST, the other agencies involved in Van Winkle 18 are the Coast Guard, the state Department of Environmental Conservation, Radiological Systems, and the Ketchikan and Juneau fire departments.

The Emergency Operations Center for the drill is located in Sitka’s firehall. Chief Dave Miller says Sitka’s normal emergency services have not been compromised by the drill, even though the city’s received a few calls about the sirens and other increased activity. “We don’t want people getting excited,” Miller says. “After all, it’s just a drill.”