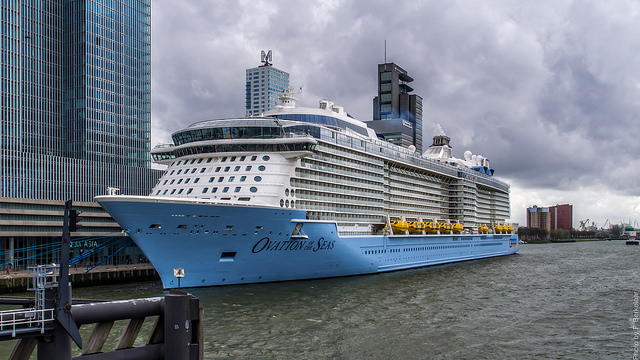 The 5,000 passenger Ovation of the Seas, in the Port of Rotterdam. CLAA’s Fred Reeder argues that being able to dock a Quantum-class ship like the Ovation (the second-largest class of cruise ships afloat) could bring an additional 100,000 passengers to Sitka each year, and an additional $600,000 in local sales taxes. (Flickr photo/Frans Berkelaar)

After hitting a low ebb four years ago, Sitka’s cruise ship industry is bouncing back.

Fred Reeder, with Cruise Line Agencies of Alaska, told the Sitka Chamber of Commerce (5-9-18) that the outlook for large-ship cruising — around the world — was improving. He was concerned that Sitka was not ready to capitalize on the uptick.

The economic recession which began in 2008 was clearly reflected in the decline in Sitka’s cruise ship passenger numbers.

That year, according to data presented to the chamber by Fred Reeder, Sitka hit an all-time high of almost 290,000 passengers — over one-quarter of the million or more who cruise to Alaska every summer.

By 2014, however, passenger traffic was down to only 90,000. To many that may sound like a lot, but not in an industry that depends on volume to support a range of shore-based businesses.

“You get down to 90,000 and no tour operator can survive. The fact that some did survive is a testament to their fortitude.”

Reeder said that Sitka had 170,000 cruise passengers last year, will have 160,000 passengers this year, and 225,000 passengers next year. The swings are not due to economic trends, but to the repositioning of some ships, and the replacement of others.

Worldwide, over 27 million people will cruise this year. And they’ll be cruising on ever larger ships. Where they sail almost doesn’t matter. Cruising is changing.

“Here’s the Norwegian Bliss. I thought you might like this one. It’s 18 decks high, and it’s got a go-cart track on the back. You can rent the cars for $20 — or whatever. I’m not sure. And then you can see the water slides. The ships are becoming, in part, the destination. They also, with bigger ships, the infrastructure in the ports has got to change. Because the ships are not going to get smaller.”

Reeder said that Alaska would benefit from regional planning to ensure optimum itineraries for some of these newer ships. The typical cruise involves three ports of call — possibly a fourth, if they can. But you can’t park a 5,000-passenger ship just anywhere.

“Some ports have limited infrastructure and are unable to accommodate larger vessels. That would be like Sitka. We can take larger vessels — but only one at a time at a dock. The rest have to anchor. Well, if you’ve got 5,000 people on board you are not tendering. Not going to happen. It was one thing when the ships were at 1,200 passengers, they could do that. They get up there at 2,000 – 2,500 — why bother? People are going to be stacked up in the stairways for hours waiting to get off. It just doesn’t work. We need as a community to come to that realization: Tendering doesn’t work anymore, not if you want this industry.”

Reeder, who has formerly served as mayor and school board president, was clearly frustrated that Sitka never mustered the political will to build a public cruise dock downtown. But he couldn’t be happier with the success of the private dock built by the McGraw’s at Old Sitka.

Reeder explained how it’s changed his work as shore agent, when the Star Legend arrives for the first time on May 24.

“Because we have a dock now finally, we’ll be loading two 40-foot containers of frozen and produce on board that vessel, right here in Sitka. They’re being shipped in on AML, and they’ll spot the vans down on the dock in the morning. We’ve got a crew to load the ship. Those are jobs. That’s how you grow this economy.”

Reeder argued that increasing Sitka’s cruise ship capacity would create more of these types of jobs, generate substantial tax revenue, and “change the paradigm that Sitka has been stuck in for the last 20 years.”