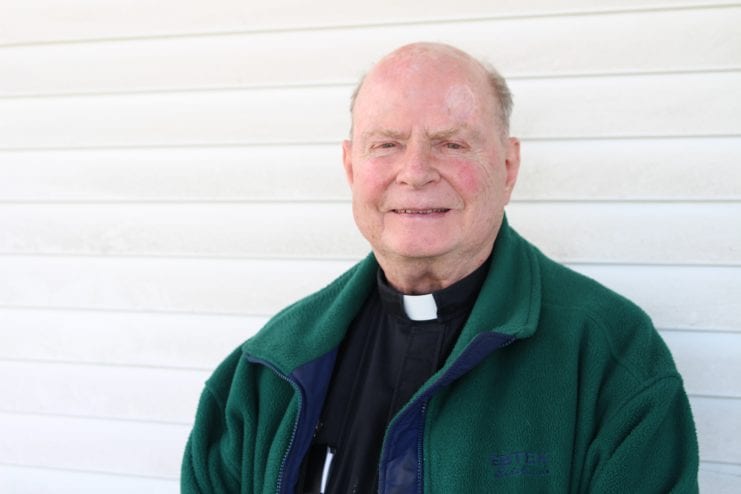 Father Peter Gorges will be celebrating 50 years of priesthood Tuesday, May 29 at St. Gregory’s in Sitka (Photo/KCAW/Katherine Rose)

You may be working your way toward 50 years of marriage, a “golden jubilee” anniversary. But what about 50 years of working at your job?! That’s what Father Peter Gorges is celebrating next week in Sitka — 50 years of priesthood.

Father Peter Gorges calls Sitka home now. But one of the state’s most itinerant Catholic priests wasn’t always an Alaskan.

“Born and raised in the Bronx, went to school there right through college,” Gorges said. “Father died early on at the age of 42. My widowed mother did a great job raising four kids. None of us landed in jail.”

After college, Gorges worked as an auditor at a bank in the city. One summer, he moved to Ohio to get his hands dirty working on a farm.

“Thought I’d be working in New York City for the rest of my life,” Gorges said. “I learned what fresh vegetables are supposed to taste like.”

But a future in the seminary still wasn’t on his mind. Then he was drafted by the U.S. Army in 1957 and sent to Anchorage to become a chaplain’s assistant.  He was assigned to Wildwood Station in Kenai, his first experience with Mass in Alaskan conditions.

“Mass there was interesting,” Gorges said. “In the winter time, someone would come and light the space heater first thing in the morning. And by 6 p.m. it was warm in the church.”

Gorges realized they needed help. After his service was complete, he went to St. John Seminary in Boston. He was ordained in 1967 in Juneau, traveling across Southeast, working first in Hoonah, Pelican and Gustavus .

“I got into Sitka to see what Sitka looked like,” Gorges said. “Went down to Ketchikan and  I accused the Lord of false advertising. It was sunny for two whole weeks in Ketchikan.”

He’s worked as a priest in churches across the state, such as St. Paul the Apostle in Juneau , Our Lady of Guadalupe in Anchorage, and parishes Fairbanks, Palmer, Kenai and all over Southeast. He came to Sitka in 1999 and was pastor here until 2001. Then he ‘retired.’ But not really. He became, essentially, a substitute priest, traveling all over Southeast, even up to Anchorage and Fairbanks to fill in when churches needed help.

“So I’ve been pretty much all over the state filling in as someone needs to go on vacation or a meeting or whatever,” Gorges said. “And that’s been a good way to see the state.”

He says not much about the church has changed. Young and old, parishioners come and go, and the church continues to serve the community. But, the busy traveler he is, he has noticed something different in Sitka.

One social event he won’t be missing? His “Golden Jubilee” mass celebrating 50 years in the priesthood.

“I’ve fished the waters and I’ve climbed the hills and I’ve walked the streams. It’s a good life,” Gorges said. “Life is good. Retirement is better. I recommend it.”

The Golden Jubilee Mass for Fr. Peter Gorges will be held at 5:00 p.m. Tuesday, May 29, at St. Gregory’s Catholic Church.