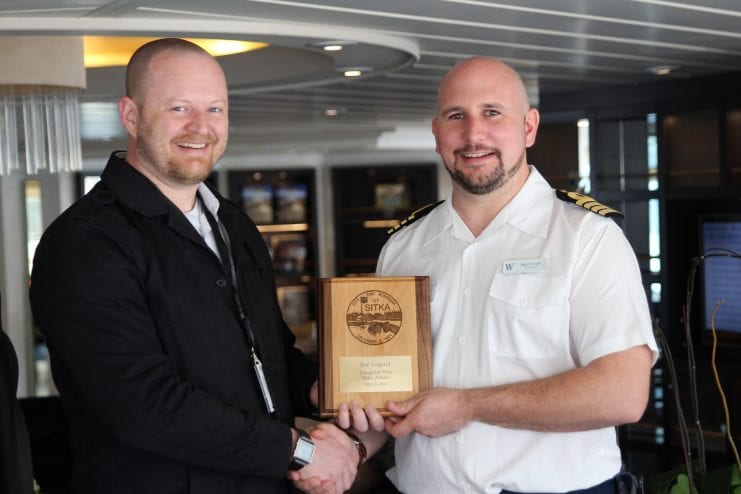 For the first time, Sitka’s deep water dock is able to accommodate two cruise ships at a time — allowing more passengers to come ashore. That happened today when the Silver Shadow and the 200-passenger Star Legend, making its first port of call, anchored. KCAW’s Emily Kwong reports on the blockbuster connection between the Star Legend and Sitka.

Ned Tutton, captain of the Star Legend, and Sitka’s city administrator Keith Brady are shaking hands. Between them is a glass plaque, commemorating the luxury vessel’s maiden voyage to Sitka. But that’s not all that’s shared between them. I’m talking about Hollywood actress Sandra Bullock.

(Movie trailer for the Proposal: Sweetie, honey. Some proposals change you. Why don’t you get married here tomorrow? Let’s see a kiss!)

Though set in Sitka, very little of the 2009 romcom was filmed on location. Not so with Bullock’s 1997 action film Speed 2, which was filmed aboard this very ship in Key West, Florida.

(Movie trailer for Speed 2: Now, they can’t change course. Seems odd. Yes, it is odd! They’re abandoning ship in the middle of the night)

Then the ship was called the Seabourn Legend. For the evacuation scene, the sprinkler system was used to simulate rainfall.

(Movie trailer: Who is running the ship? Oh yeah, I am)

Guenther Kopf, the hotel general manager aboard, says the boat crew collaborated closely with the film crew to pull it off and after production wrapped, the studio threw a party.

“Sandra Bullock was mixing cocktails, Mr. [Robert] Duvall was flipper burgers on the BBQ grill. We all were issued a t-shirt with Speed 2 on back with all the names of the film crew and all the names of the crew on board. So that was a fantastic event and definitely something you remember,” Kopf said. 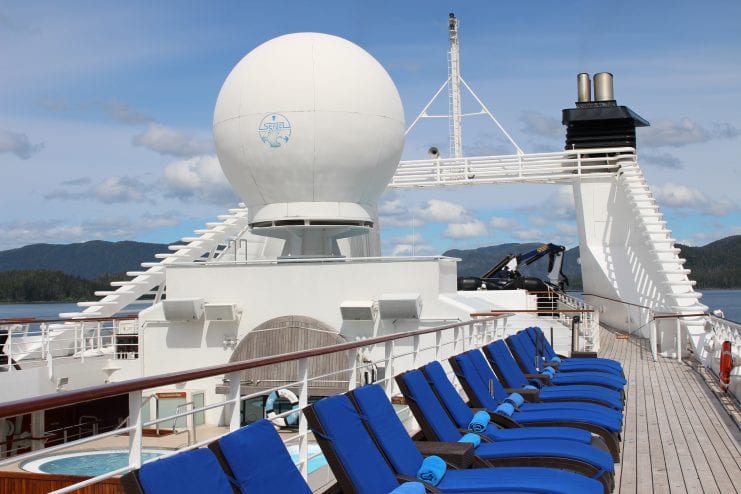 The deck of the Star Legend, which caters to 200+ passengers. The ship will make Sitka a regular port of call during its summer travels. (Emily Kwong/KCAW photo)

Kopf spends three months at sea and the rest of the year in his native Austria, where he manages his family’s vineyard. After over a decade spent working on big ships, he decided last year it was time to downsize to a smaller, luxury line.

With 104 suites, the Star Legend was purchased and renamed by Windstar Cruises in 2013. Kopf calls it a home away from home, speaking glowingly about his 100-person crew. 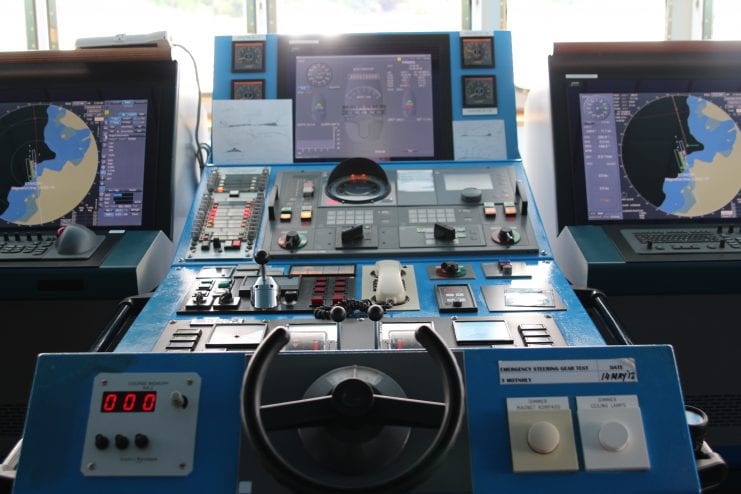 The bridge of the Star Legend. Propped among the equipment are drawings of whales, which the captain will identify for passengers over the PA system. (Emily Kwong/KCAW photo)

“The crew is so friendly, so accommodating, remembers [guests] names,” Kopf said. “Every single cruise, I have guests coming and say, ‘Oh my goodness, I was three years ago on a cruise in Tahiti and I come into the dining room and Esther the waitress says, ‘Hey, Mr. and Mrs. Miller, how are you? You remember me?’ And they say, ‘How is this possible.’”

Windstar Cruises is exactly the kind of boutique line Sitka hopes to draw to its shores. Rachel Roy with the Sitka Chamber of Commerce says the last time Windstar Cruises came to Sitka was in the 1980s.

“They were really happy to have a dock to dock to when they were in town. That was one thing they looked at. They will be in Sitka every itinerary they have this season,” Roy said.

That includes local excursions and a performance on board by the Naa Kahidi dancers. Roy adds that when visitors inevitably ask about the Proposals, she talks about how the character of the town portrayed in the film is spot on. But luckily, she adds, locals don’t get internet from a coin operated machine.