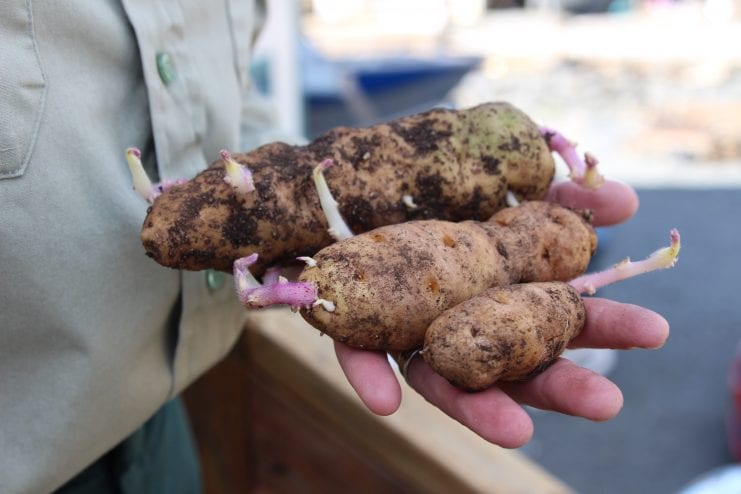 Sitka is rich in history. There is history in the buildings, the cultural landscape, and in the people themselves. But did you know that there is also history in the dirt? For generations, locals have grown a tuber called the “Tlingit potato” that thrives in Sitka’s otherwise challenging gardening environment. This year, the Sitka Tribe of Alaska and the US Forest Service are partnering in an effort to genetically isolate and identify the Tlingit potato — and incorporate it into Sitka’s food-security strategy.

Tlingit potatoes are long and thin, covered in eyes, more like a fingerling than a russet. Often called “Maria’s Potato” named after weaver and artist Maria Miller who grew them for years in Haines. And according to Michelle Putz of the Forest Service, they grow well in Southeast Alaska.

“It’s a very well adapted plant,” Putz says. “It does much better in our gardens than your typical European potato. The slugs don’t even hardly eat it.”

Two years ago, the Forest Service and Sitka Tribe of Alaska joined forces to plant a potato garden full of this local, ancient variety. STA cultural resources coordinator Tammy Young says the project came from a desire to educate and make traditional food more accessible to the community.

“We have ongoing issues here in the community of Sitka, one of the issues being food security,” says Young. “We hope to be able to teach people how to grow this resource that’s been in this part of the world for over 200 years.”

They started with potatoes Putz received from a Sitka family that had been passing down the seedlings for generations. Community volunteers and Pacific High students planted the potatoes.  But then, as word got around about the garden, more spuds started showing up at Putz’s doorstep.

“Someone else in town said ‘You know I have this potato from Tenakee that’s supposed to be a Tlingit Potato. I’d like to give it to you so you can grow it,” Putz says. “And it was huge, it was easily over a pound. It had to be twelve inches long by four inches across.”

Putz says when she planted it, that one potato yielded 17 pounds of new spuds.

“That’s huge production,” she says. “When you plant European potatoes, I’ve been told that 5 or 6 pounds from one potato is really good production. So 17 pounds is kind of ridiculous.”

But it didn’t look like the other Tlingit potatoes. It was so big. Was it from the same strain as the others?

“It seemed really valuable to try and see ‘Is this a Tlingit potato. If yes, then I better start sharing these really widely. If not, then what is it?”

Enter Elizabeth Kunibe. She’s known by many as the ‘potato lady.’ Kunibe is a wildlife and decoy woodcarver in Juneau working on her Ph.D., and in her studies she’s specialized in potatoes and ancient gardening practices in Alaska.

“I didn’t realize there were so many gardens,” says Kunibe. “When anthropologists asked questions for land designations in the 40s, people would talk about fishing and hunting and berry patches, but nobody would ask them if they gardened.”

But oral history passed down through generations of family members as well as detailed captains logs dating back to the 1700s told a different story- confirming that the potatoes didn’t arrive with Europeans, but were brought back with the Tlingit people from South America. So when Kunibe received some of Maria’s Potatoes, she wanted to learn more.

“And I looked at the potato and I said, “That would be interesting if we could analyze its DNA and find out anything about it,” she says.

She reached out to the Potato Genome Project, research being done through the USDA, and began to learn more about potato genetics.

“When you analyze the DNA of a potato, they have the continual genetic line of the same potato that arrived,” Kunibe says. “They’re planted vegetatively, so they’re actually clones. The geneticists looked at Maria’s Tlingit potato and said ‘Oh this has never grown in Europe.’  Prior to this research everybody that was talking about potatoes or was interested in them thought they were brought over by settlers.”

She says there are three potatoes growing in Southeast Alaska with similar characteristics. Makah Nation potatoes from the Olympic Peninsula and Haida potatoes each are comparable to Tlingit potatoes. The question Kunibe wants to answer- are all of these potatoes the same or is each one its own variety?

Kunibe is collecting samples of all the potatoes, including the potatoes from Sitka’s garden and the “Tenakee giant,” to be tested in Washington later this year. Testing a potato’s DNA isn’t as simple as extracting the chromosomes. It takes time.

“The technique is you grow out the potato,” Kunibe says. “Then you get the leaves and extract the DNA from the leaves from the potato. So it takes a while, maybe a year in process to get this investigation done.”

But the time is worth it to many. Young says it’s important to get some answers.

“It’s a part of our history,” she says. “And documenting our history from our own vantage point is always important to us and facilitating the opportunity for our young tribal members to learn a new skill.”

Whatever they find, it’s clear the potatoes will continue to flourish in Southeast gardens and be appealing on the dinner plate.