Sitka crash victim was a survivor in celebrated ’12 maritime rescue 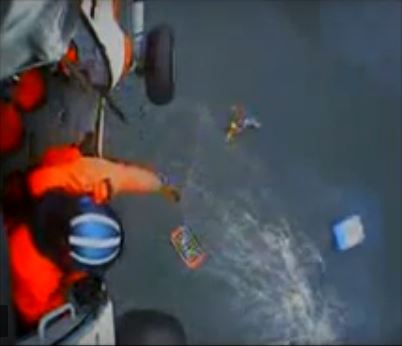 An Air Station Sitka helicopter lowers a basket to 19-year old Ryan Harris, after he had spent over 24 hours floating offshore in a blue fish tote (at right). Harris was the crewman aboard the Kaitlin Rae, whose skipper Stonie “Mac” Huffman escaped the sinking vessel in a survival suit. Huffman died this past weekend (6-9-18) in a float plane crash.

The loss of Stonie “Mac” Huffman in a weekend float plane crash will be hard news for many Sitkans to take — especially those who remember his near-miraculous escape from death six years ago when his fishing boat capsized offshore.

Huffman was fishing off of Cape Edgecumbe in his 28-foot drop-bow troller, the Kaitlin Rae, on September 7, 2012, when the boat was swamped in heavy seas.

Neither Huffman or his deckhand, 19-year old Ryan Harris had time to radio a mayday call before the boat went under. Huffman managed to pull on a survival suit, and Harris got into an empty blue fish tote.

When the boat was reported overdue early the next morning the Coast Guard launched an intensive air search. Huffman drifted about 10 miles in his survival suit and went ashore — unharmed — at Pt. Amelia on the outer coast of Kruzof Island.

Ryan survived all night and the following day in the blue tote, when he was spotted by the troller Nerka near Gilmer Bay.

Both men were rescued by the Coast Guard roughly twenty-four hours after they went into the water.

Read a first-person account of the rescue of Ryan Harris in Tele Aadsen’s blog, “Hooked.”