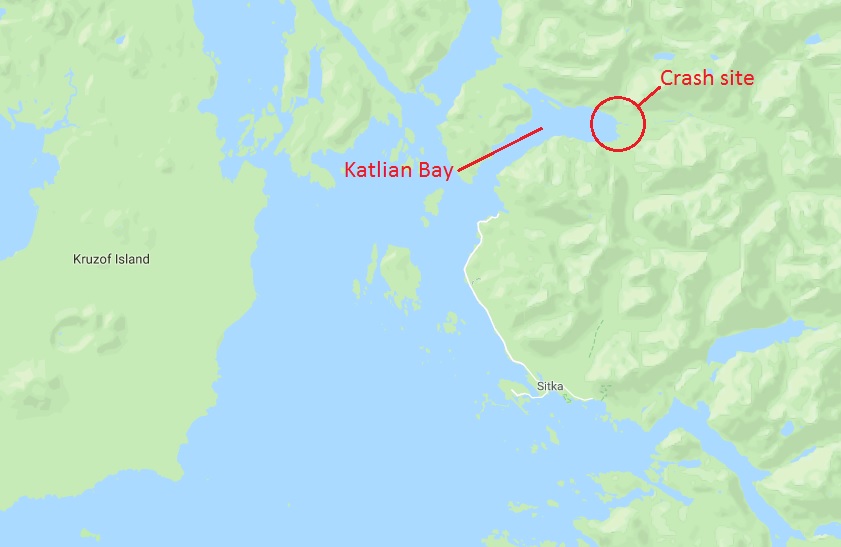 Two men died in a plane crash this weekend north of Sitka during a sightseeing trip. The National Transportation Safety Board and Alaska State Troopers are now on scene investigating.

According to the Coast Guard, the Piper float plane with two people aboard departed Sitka on Saturday for a 20-minute flight and never returned.

After an extensive search, an Air Station Sitka helicopter crew found the wrecked plane Sunday night. It was found submerged where the Katlian River meets the Katlian Bay.

The pilot, 45-year-old Stonie Huffman of Sitka, and passenger, 66-year-old James Ronge of California, were both located deceased. Ronge’s body was found after an extensive search on Monday.

In a published statement, Captain Stephen White with Coast Guard Sector Juneau said, “It’s with heavy hearts that we found the men deceased and our thoughts are with the families and friends of these individuals during this difficult time.”

With the search over, the Alaska State Troopers and two National Transportation Safety Board (NTSB) agents, Noreen Price and Eric Swenson, are now conducting an investigation of the incident.

“The intent for the next 24 hours, or as soon as possible, is to get to the accident site and go ahead and document it to the best of our ability,” said Clint Johnson the Alaska Region Chief for NTSB. “[The plane] is partially submerged is in some brackish water, or a creek or a stream is our understanding right now. That’s all preliminary information. Then, we’ll go into recovery, as far as recovering the wreckage.”

The plane was a white and red colored PA-18 Super Cub float plane. It departed the Sitka seaplane dock on Saturday at 7:15 p.m. for a tour of Katlian Bay and Olga Strait.

Note: Pilot Stonie “Mac” Huffman, who perished in this weekend’s crash, previously was a survivor in a celebrated maritime rescue in 2012.