At Fortess, a new wild space for black bears 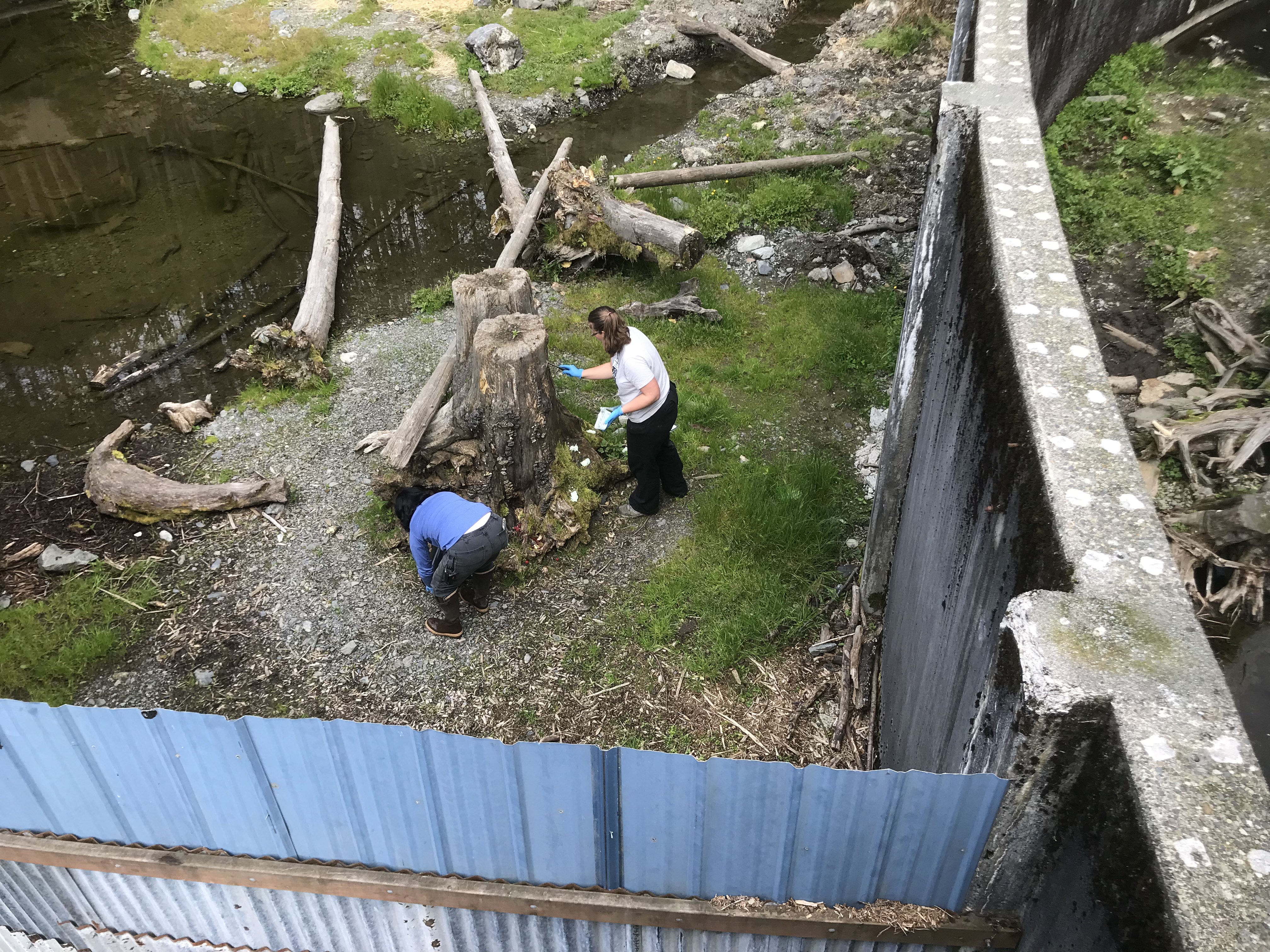 Volunteers place treats in crevices in the new habitat.

Three orphaned black bears in Sitka have been given a bigger home. This weekend, the Fortress of the Bear released Smokey, Bandit, and Tuli into expanded territory. They’re no longer cubs, so they need more range to explore. KCAW’s Rachel Cassandra caught up with Claire Turner, the bear manager, who has worked with the bears since they were cubs.

“Knowing the nature of black bears,” Turner says, “how they can be a little more aloof, and they are real avid arboreal climbers, we’ve wanted to enclose a space that is going to really lend itself to increasing their mental welfare and giving them some great spots to hide and to forage.”

Turner and I are standing on a deck overlooking what will be the new black bear habitat. It’s a mostly-wild acre, surrounded in bear-proof metal and wire fence. There’s a creek at the back. And the space is filled with salmonberry bushes, spruce, and slender alders. It has plenty of trees to climb and food to forage.

“There’s a good chance that once they get comfortable in that hillside,” Turner says, “that we won’t see them that often because it’s very dense brush and it’s going to be tricky to see them but that’s not a problem I mind having.”

Turner first takes me through their old, smaller habitat. It looks like a bear playground. It has big tubes for them to hide in and with chunky logs and sticks banded together. Connected to that is the brushy wild.

Trying to keep a number of familiar elements to the new exhibit,” Turner says, “so they have that comfort level and they have things that they still know. So it’s shouldn’t be too scary when we move them into this new, exciting space.”

The big question for all is: will the bears enter their new space? Turner…hopes so.

Turner says, “They really like the space they’re in now, so will they be quick to go back to their old home or will they be hesitant?”

The next day, at the Fortress, about 150 people show up to watch this moment. The bear handlers go into the new habitat. Volunteer Kody Knighten tells me they’re loading the nooks and crannies with snacks. 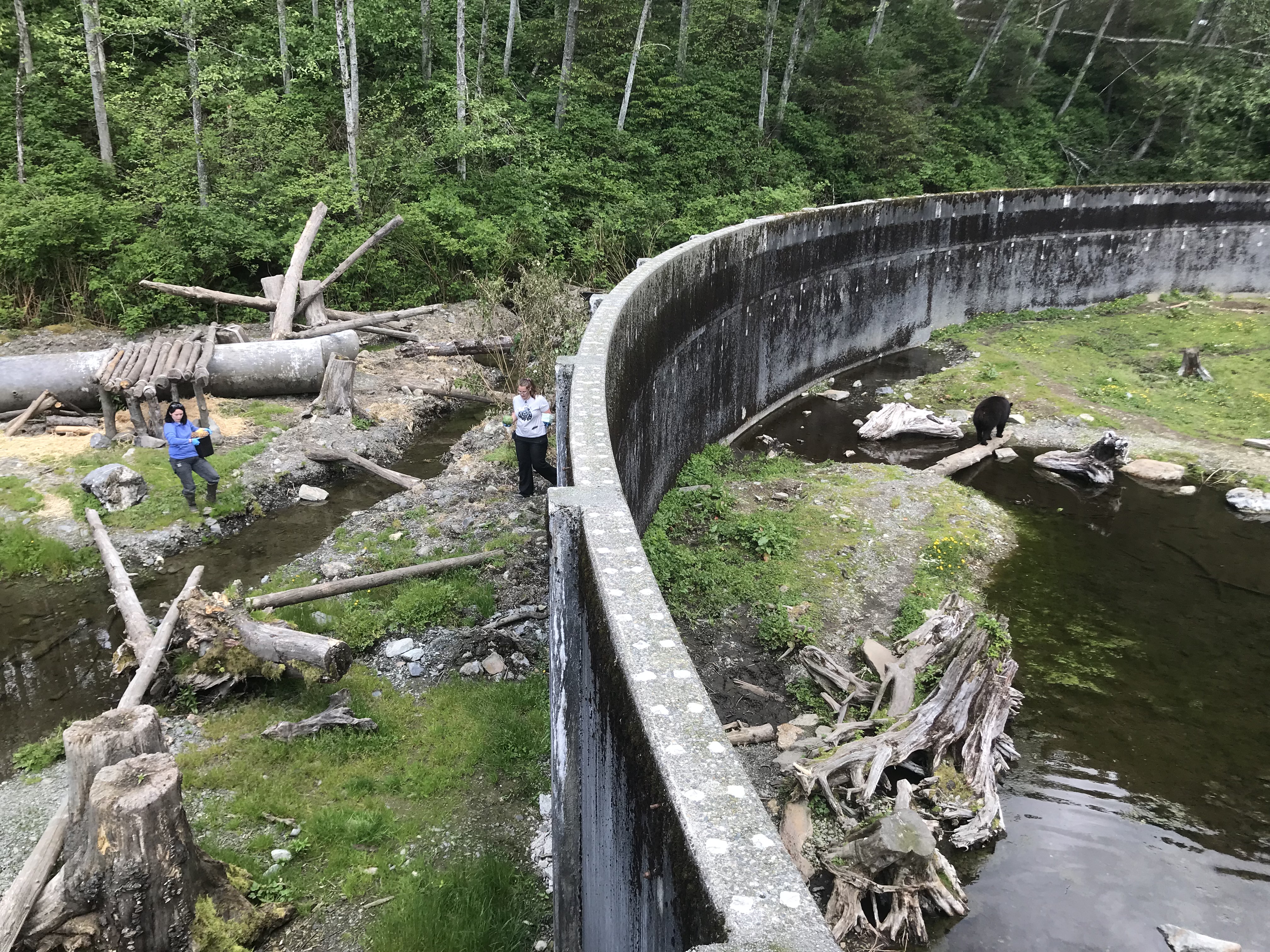 Volunteers prepare the new habitat before the bears enter.

“So we put out the rare treats that they don’t get often was the pistachio delight, raspberry parfait and the ambrosia delight,” Knighten says, “and then we also got a bunch of salmon eggs donated not too long ago and so we put those in the freezer and made essentially salmon-egg popsicles.”

Les Kinnear enters the bear habitat. He along with volunteers and staff built the habitat. They worked over the winter while the bears were hibernating. Usually people don’t enter the enclosure but the bears are very used to Kinnear. Before the door even opens, the three bears stick their noses up in the air.

“I told you,” says a woman in the crowd. “He sees that wonderful ambrosia salad.”

All three bears have entered their new home.

“We’re very excited about what’s happening here today,” Kinnear says. He is beaming. “The bears are exploring, finding the perimeter of their new territory. Bandit’s up on the trail adjacent to the fence. He’s excited, he’s nervous.”
“How do you know the bears are nervous and excited or do you just imagine it?” Cassandra asks.
“Just their body language,” Kinnear says. “He’s alert. He’s up on his toes. His ears are perked forward, he’s got his head on a swivel. He’s just very excited about what’s happening. Look at him up there. That’s absolutely fabulous.” 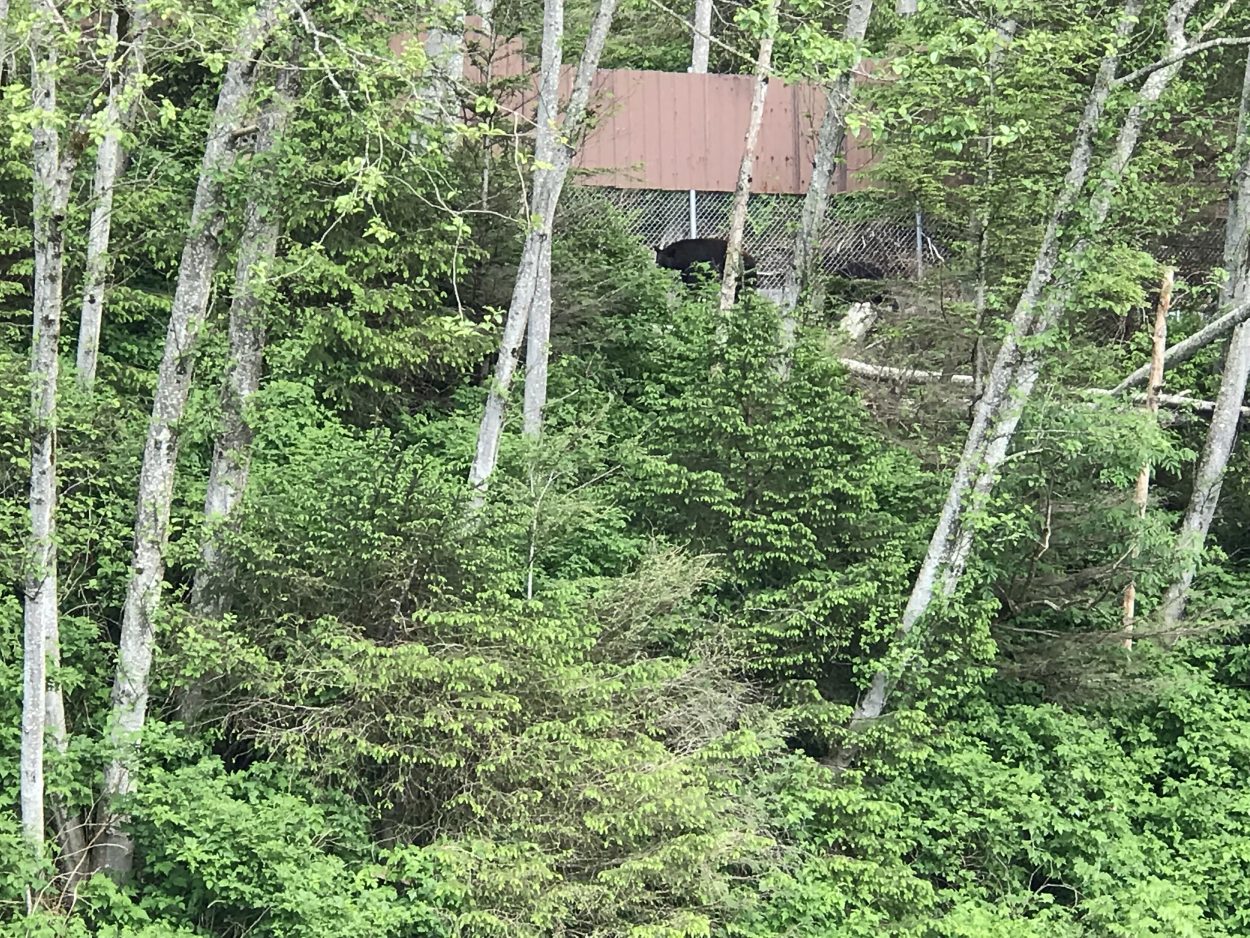 Bears exploring the perimeter of their new space.

As the bears continue to explore, Tuli even climbs a tree. After a few days, they’re digging muddy daybeds, climbing trees, and taking naps. Soon the salmonberry bushes will be fruiting and the bears can enjoy the habitat’s natural treats.