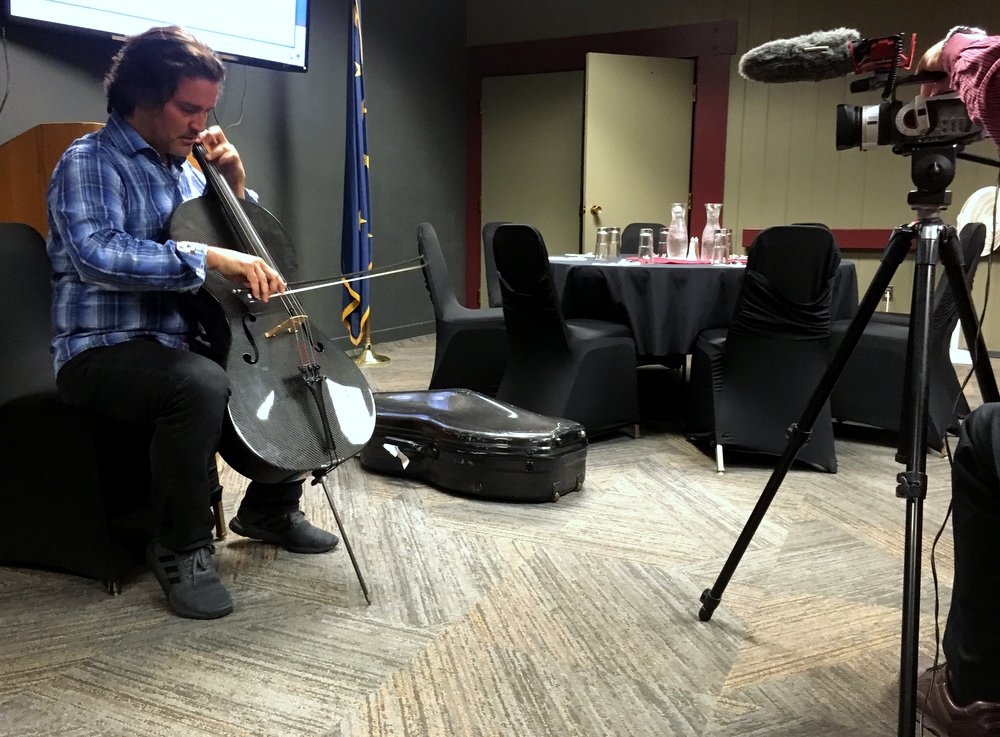 Zuill Bailey demonstrates the musical qualities of his Luis & Clark carbon fiber cello for the Sitka Chamber of Commerce (and for a television audience). The owner of a 325-year old Goffriller, Bailey says that instrument (though extraordinary in concert) is “limiting” in the field. He tells kids that the Luis & Clark is “made from the same thing as Batman’s car.” (KCAW photo/Robert Woolsey)

What do Zuill Bailey and Johnny Cash have in common?

The artistic director of the Sitka Summer Music Festival and the country music legend are both Grammy winners — but there’s something else, and you’ll want to be prepared the next time you play music trivia.

Zuill Bailey is sitting just a few feet away from me, performing an excerpt from an Allemande by Johann Sebastian Bach for the Sitka Chamber of Commerce.

He performed this piece in its entirety just this past April, at a concert venue made famous in 1970 by Johnny Cash. 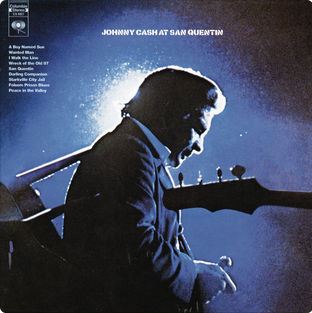 Recorded in 1969, Johnny Cash’s “Live at San Quentin” was a seminal album of 1970. The feelings his “captive audience” connected with were different than those produced by Bailey’s performance: Prison officials feared a near-riot during songs like “A Boy Named Sue.”

Bailey performed this piece at the San Quentin Prison, in California.

As he ended, Bailey noticed that one of the inmates was sobbing.

“And he stood up and said my name is blank-and-blank, and my number is such-and-such, and I don’t know what’s happening to me,” Bailey recounted the moment. “But the sound of that cello is making me all tore up. It’s breaking me, and I haven’t cried in 26 years, and I’ve been in here 27. Just literally shaking. ‘Why is this happening to me?’ And I stood there, and I didn’t know what to say.”

Bailey did finally come up with a satisfying answer, which I’ll share in just a moment, but it’s important to understand that Bailey has always been somewhat fearless about musical outreach — performing in remote Alaska and other places, like the Hiland Correctional Center in Eagle River — that are not the usual touring venues for artists of his caliber.

His greatest worry has always been his instrument — his 325-year old Goffriller cello. Bailey talks about the limitations of the old cello as if it was as disagreeable as Green Eggs and Ham.

Although Bailey played the Goffriller at San Quentin, he now takes a Luis & Clark carbon fiber cello on the road, especially when it’s off the beaten path somewhere in Alaska.

Listed at just over $7,000, the sleek, black instrument is not cheap — but it’s pennies on the dollar compared to his concert cello. And it’s cool: He tells kids that it’s made out of the same thing as Batman’s car.

In fact, he’ll hand it over and let them take it for a test drive.

“To be honest, I’ve found that kids are more interested in this cello, because they can’t comprehend a 325-year old cello,” said Bailey. “They’re not there yet. But they’ll say (in kid’s voice) ‘This is the coolest-looking thing. It’s awesome.’ And I’ll say, ‘Wanna play it?’ And that’s even more awesome. I’ve got more pictures of kids playing this cello — Have it! — I just need a spray thing of Windex when they’re done. (Laughter)”

In addition to his own personal Luis & Clark, the Sitka Summer Music festival has acquired a quartet of the carbon fiber instruments — a violin, cello, and two violas — so that the show truly can go on the road. Bailey is absolutely sincere when he says that he believes that chamber music is the people’s music.

Bailey says the San Quentin inmate did not really look like the sensitive type, as he asked — through tears — to understand what he was feeling. Someone handed the guy a tissue, though. And Bailey came up with an answer.

“I told that guy, when he cried, ‘You just reminded yourself that you’re human. Welcome back.’”

Welcome back. The perfect, and perfectly-unexpected, theme for a double-billing between a classical cellist and a country music great.