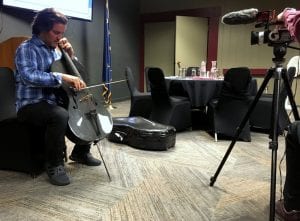 Zuill Bailey demonstrates the musical qualities of his Luis & Clark carbon fiber cello for the Sitka Chamber of Commerce (and for a television audience). The owner of a 325-year old Goffriller, Bailey says that instrument (though extraordinary in concert) is “limiting” in the field. He tells kids that the Luis & Clark is “made from the same thing as Batman’s car.” (KCAW photo/Robert Woolsey)