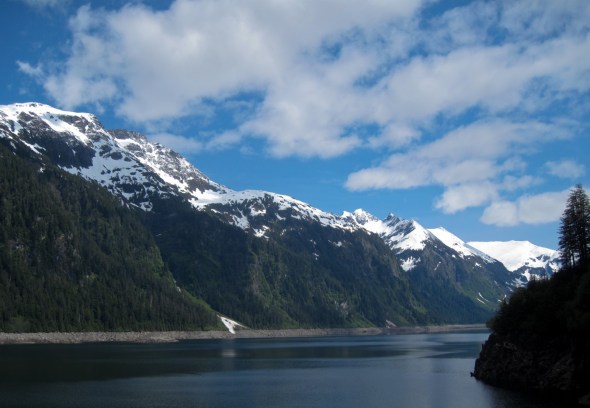 The City of Sitka receives drinking water and hydroelectricity from Blue Lake. Due to an upcoming inspection and concerns about the penstock, which regulates the flow from Blue Lake, the city is getting state loans to create a secondary water source for Sitka at Indian River – an $18 million project. The cost is driven by new federal requirements which declare Indian River’s water turbidity too high for safe drinking. (Photo courtesy of Flickr / Creative Commons user thedamian)

The Sitka Assembly has approved several rate increases on first reading. Wastewater, solid waste and moorage are slated to go up 6% to pay for infrastructure and water delivery by  22% increase. Electric rates are not changing this year, but do fluctuate with the seasons and could change if consumers buy more.

Why the big boost to water rates? It’s all to pay for a secondary water source, which would kick in during a planned or emergency outage. A water outage could happen in 2019, when FERC (Federal Energy Regulatory Commission) will inspect the penstock regulating Blue Lake. The $18 million project will be paid for with a loan from the state.

Assembly member Steven Eisenbeisz said this rate increase to water, which amounts to $8.92 a month for most residents, is the only one he would support.

“With the information that’s currently in front of me, I do believe that our secondary water source is a necessity. It’s not that we want to build it. It’s that we will be mandated to build it. I need to find a way to pay for that,” Eisenbesiz said.

Only Assembly member Richard Wein opposed the water hike. It passed, on first reading, along with the other rate increases to wastewater, garbage, and moorage. Eisenbeisz voted against everything, but the water hike.

Speaking during persons to be heard, Kevin Mosher implored the Assembly not to raise rates any more. He argued that the capital plans, which are driving rates to pay for infrastructure, are based on assumptions that usage will stay the same. He continued, “[Assumptions] that people will not use less, that people will not convert to alternative methods, [like using] fuel oil or smaller garbage cans. And so increasing these [rates] based on those  assumptions…I think that would be a faulty thing,” Mosher said.

The Assembly also made a decision on how to divide the money within the Fisheries Enhancement Fund, a $42,000 pot. It broke down as such: the Sitka Sound Science Center received $22,500, the Alaska Longline Fishermen’s Association received $10,000, and the Chinook Futures Coalition received $9,500.

That last vote – for Chinook Futures – was close, 4-2, with Mayor Matthew Hunter and Assembly member Kevin Knox voting against.

The fish box tax was set up by voters in 2004 to pay for “fisheries enhancement.” The definition of fisheries enhancement was debated Tuesday night, with Sitka Sound Science Center Director Lisa Busch saying it meant aquaculture. She requested the full $42,000 to pay for the SSSC hatchery and historic Mill Building.

“This tax is an excise tax which means the money collected should benefit the people who are being taxed, in this case guided sport [fishermen]. When the fish sent from our hatchery return, they are caught by commercial fishermen and sport and guided sport fishermen. They’re also caught by little kids who climb down the rocks on the sea walk and families who head to our beach after work. We see them as our community’s fish,” Busch said.

Assembly member Kevin Knox made a motion to reconsider how the money was divided between the Sitka Sound Science Center and ALFA at the end of the meeting. He said later to KCAW over the phone that he would have included Chinook Futures in that reconsideration, but legally couldn’t as he did not approve their funding request in the first place.

The Assembly also approved a resolution to eliminate fees at the fishermen’s work float and drive down load zone from September 15th through March 15th. Harbor Master Stan Eliason hopes this will encourage some to do major boat repairs in winter, so it doesn’t bottleneck over the summer.

The Assembly also approved an application for a Justice Assistance Grant (JAG) to hire a police officer to perform drug investigations and directed the city administrator to seek federal Pitterman-Robertson funding to build a public-use cabin. The city currently operates the Tom Young Memorial Cabin, which generates $8,000 in revenue a year.

Trident Seafoods Corporation pulled their request to lease space at the Gary Paxton Industrial Park and it may come up at a future meeting. The company wanted to do further legal review. Assembly member Aaron Bean was absent from this meeting.

The Assembly’s next meeting is tomorrow to hear an appeal from Tamico, Inc. on how the city awarded a bid for replacing the pilings at the O’Connell Bridge Lightering Facility. The contract went to Turnagain Marine. The Assembly may enter executive session to discuss some, or all, of this matter.