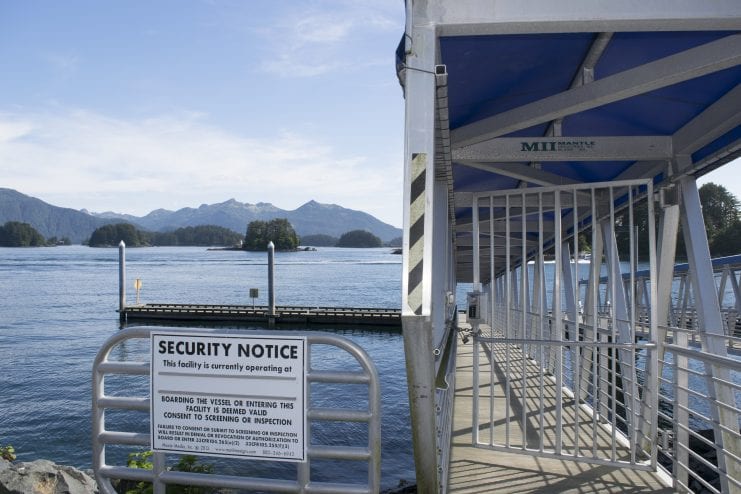 The Sitka Assembly has denied an appeal by a Petersburg company whose bid for the O’Connell lightering float project was rejected by the city earlier this year.  KCAW’s Katherine Rose reports from Thursday night’s special meeting.

The construction company, Tamico submitted a bid for the O’Connell Lightering Float project in April along with one other company, Turnagain Marine Construction in Anchorage. The city awarded the project to Turnagain last month.

Harbor staff noticed the damage to the pilings in June of 2017. The city began the process of looking for a contractor to fix them, and estimated the project would cost around $280,000. Then, after consulting with the National Marine Fisheries Service and the Army Corps of Engineers, they found they would need a special federal permit for the project- an IHA, or Incidental Harassment Authorization permit. This essentially gives the city permission to disturb marine mammals while working on this project – at a cost of $125,000.

But Jim Martinsen, President of Tamico, said the bid was not awarded fairly. He made his case to the Sitka Assembly in a one hour presentation over teleconference. His main objection? That the city was not being transparent about the permitting process when they rejected Tamico’s bid. He also argued that the IHA permit wasn’t needed in the first place.

“In a nutshell, you don’t need a commercial driver’s license if you can transport all the goods with a pickup,” Martinsen said.

Martinsen also argued that the city shouldn’t consider paying for an IHA, because it sets a new precedent for repairs, causing additional costs for citizens.

“I don’t think it’s in the best interest of any of us, including the residents of Sitka or Southeast to pay this kind of money for a permit to maintain the existing facility,” he said. “That would cause hardships, not just for marine construction in general, but for all marine industries.”

City Attorney Brian Hanson was given an hour to respond. Hanson said that one of the ways Tamico erred is hiring a specialist with no experience in IHA permits. And that specialist budgeted $5000 for permitting in Tamico’s bid, far below the cost of an IHA.

“They did not have that experience, nor had they ever done an IHA. They didn’t even know what the acronym meant,” he said.

Hanson also noted the group’s inability to provide proof of insurance and cited previous projects for the city of Sitka where Tamico didn’t have proper permitting. Hanson said he did agree with Martinsen that the regulatory action was harsh.

“Our city staff is in lockstep with Mr. Martinsen that we don’t want to do this either. We think it’s an overkill to say the least. That’s a nice way of saying it, Hanson said. “We realize we have to comply with federal regulations or the project is going to be stopped, we’re going to be fined, and there could be other ramifications that are serious.”

After both sides were presented, the assembly spent about 30 minutes deliberating. Assembly member Kevin Knox said the Assembly has the right and responsibility to reject bids that don’t meet qualifications to protect the people of Sitka.

“It’s up to the bidder to come to us with their best available and most relevant bid,” Knox said. “Tamico did not, in my eyes, did not meet several of the qualifications clearly listed within the bid package.”

Other assembly members noted that while Martinsen said he could find a workaround for the IHA, he didn’t provide sufficient proof that it was possible. Mayor Matthew Hunter said that he did find the exorbitant cost of the IHA permit disturbing.

“I also am fearful of this regulatory reach from Washington D.C., and the undesirability of making it more and more difficult to have industry and commerce in Alaska and Southeast Alaska. I do not like the precedence that this may set,” Hunter said. “But I find it irrelevant when it comes to the matter at hand.”

Ultimately, the assembly voted unanimously to deny the appeal by Tamico, based primarily on the failure to acquire a specialist with IHA permit experience. Before he hung up, Martinsen congratulated the assembly on being the first city to spend half-a-million dollars to repair a few pilings.