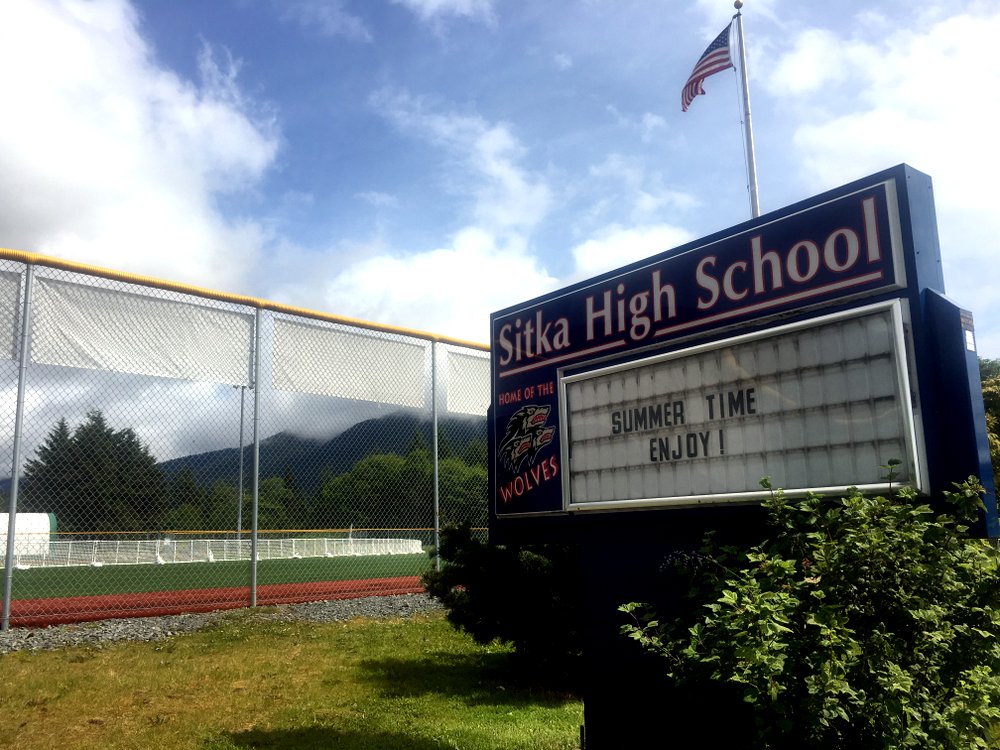 Other news from Wednesday’s busy school board meeting: First Lady Donna Walker will receive an invitation to attend the first day of work for teachers in August. (KCAW file photo)

The Sitka School District has rehired one of two teachers it furloughed at the end of the last school year due to budget cuts.

That was but one piece of news in an unusually packed summertime school board meeting. There was also an impassioned plea to keep the library at Blatchley Middle School open, a report on changes to the high school math program, and the unwelcome loss of the district’s 21st Century Learning grant which has funded many after-school programs over the last four years.

Keet Gooshi Heen teacher Hanna McCarty was one of two untenured district teachers who did not get a contract for the coming year.

At the same time, the district also laid off an English and Drama teacher at the high school, Keriann Gilson, and eliminated the middle school librarian position.

The librarian, Kari Sagel, is a tenured teacher also qualified to instruct Science. At the last school board meeting, it looked like she was going to move into a vacant Science job at Blatchley. Instead, Sagel is going into a grant-funded job (STEPS), where she will become the “Family Connectedness Coordinator,” focused on early literacy and family engagement.

But while this is a partial positive for staffing, there’s still a big question mark over the Blatchley Library: What to do with a library without a librarian?

Although she’s leaving the position, former Blatchley librarian Kari Sagel explained why a library was essential, even run by a paraprofessional rather than a certified teacher.

Some of her reasons were purely practical, like ordering and shelving books, and running the Reading is Fundamental program, and just keeping the library open for the 50 to 60 kids who go there during every lunchtime.

And some of her reasons were not practical at all, but no less critical to the well being of Sitka’s diverse student population.

“I see more and more that libraries are the place for kids that are more on the margin,” said Sagel, her voice softening with emotion. “Poor kids, gay kids, artistic kids, kids who are escaping something. I could go on. It’s what I’ve observed in the last many years.”

In addition to the Blatchley Library, the district’s other likely gap in services next year will be in programs funded by the 21st Century Learning Center grant. Superintendent Mary Wegner delivered the unhappy news that the district had not been awarded another 5-year grant.

“It was over $300,000 a year for us,” said Wegner. “A full-time person — plus money to pay really quality staff to work with them, as well as partner with SAFV, the Sitka Sound Science Center, and some of our other partners. It helped support their work with our students after school and it’s gone as of the end of June 30.”

21st Century Learning Centers had been created in four of Sitka’s buildings: Baranof Buddies, Keet’s GLO (Growing and Learning Opportunities), Blatchley After School Time (aka BLAST), and Pacific High’s LEAP (Learning Extensions & Alternatives Program). The district has had the grant for at least the last 9 years. Wegner said that letters have been sent home to affected parents “so they can start making plans for after school.”

‘Integrated Math’ materials will be repackaged in a more traditional format

Parents at Sitka High will also be receiving information about changes to the “Integrated Math” curriculum planned for next year. Although the content will be the same, the classes will revert to the names Algebra I, Geometry, and Algebra II — and the materials that go home with students will resemble the more traditional approach to Math learned by parents.

High School principal Laura Rogers thought it was a win-win.

“There’s a great deal of belief in the Core Math program as a whole, and offering that curriculum because it does use and approach that’s very inquiry-based and very project-based,” said Rogers. “It’s supported by the National Science Foundation, and I think for a lot of our students — especially those who move into math and science careers it’s worked really well. But, there were some concerns on the other side that parents at home — because it is different from what they were seeing in the past — did not always have the ability to help their students.”

Board members Eric Vancise and Elias Erickson were skeptical about trying to disguise the new, controversial curriculum as something traditional. Board president Jenn McNichol, however, saw things differently.

“My personal opinion is that I want to resist the urge to think of the New Math and the Traditional Math,” said McNichol. “Like there’s this dichotomy, these two things, and we’re choosing one over the other. Math education should have changed, for all of us. It should be different than it was for us, because the world has changed, and how the world uses math has completely changed.”

A last moment of humor from the late Tom Conley

And before adjourning for the rest of the summer, board member Cass Pook contributed some humor to the record, in remembering former member Dr. Tom Conley, who died in April. Pook said one of her favorite stories was from his time in medical school, when one of his professors asked him to carry a cadaver leg in his car…

“But he got a flat tire along the way,” said Pook. “The troopers asked him if he needed help. And he said ‘Sure’ and he opened the trunk and there was this leg.” (Laughter)She continued, “And the trooper wanted to know where the rest of the body was.” (More laughter)

I won’t spoil the story for you. Just know that even though he became a doctor, Conley always had a good toehold on the law.