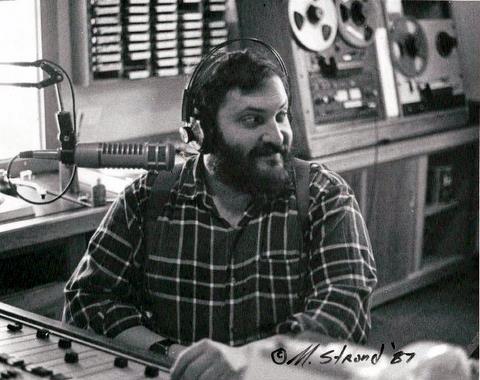 Will Swagel at the board of KCAW-FM Raven Radio in 1987, about a year before he joined the Daily Sitka Sentinel. Swagel and wife Suzanne Portello — a nurse — came to Sitka in 1982, after they saw a colleague’s pictures of Alaska. (Photo by Martin Strand)

A leading figure in Sitka’s media scene has passed away.

Will Swagel, co-publisher of the Sitka Soup, died on April 1st.

Fans of the bi-weekly advertising circular will be pleased to know that although Swagel is gone, the family-owned Soup will continue to publish — and it’s most iconic character, the Soupster, will live on.

Note: There will be a celebration of Will Swagel’ life — which the family is referring to as “Will’s Afterparty” — from 5-10 p.m. next Monday, July 2, at the main shelter of Halibut Point Recreation Area. Please bring a beverage, side, or dessert to share.

Song intro: Such is Life in a Little Town

This is the opening melody of a song composed by Lois Verbaan in honor of Will Swagel. It doesn’t have a name officially, but for purposes of this story I’m calling it “Such is Life in a Little Town.”

So how does a guy who spent the last 20 years publishing a little circular of real estate and classified ads rise to song-worthiness? It’s the Soupster — the curmudgeonly, wise, daft, observant, and witty tour guide to small town life featured in Swagel’s column “Our Town.” Swagel wrote the lion’s share of Our Town’s, but a handful of other writers — including Verbaan — contributed.

Swagel’s wife and co-publisher Suzanne Portello says the Soupster kind of evolved into being.

I decided to throw down my cards and just ask the obvious question.

KCAW – Who is the Soupster? Who was Will thinking of when he wrote it? Was it himself? Or somebody he knew?
Portello – No, it wasn’t a specific person. It definitely wasn’t himself. I think he used to generate ideas for what could go on in the Our Towns from what was on his mind — either what was happening in his life, or what was happening in the news, or just what was on his mind. He used to generate these ideas, but that didn’t mean that the Soupster was Will.

It was all surprisingly well-done and sophisticated for a circular — you never saw copies blowing around in the gutter with other ad sheets. All 2,700 copies were used by someone — even in the villages surrounding Sitka. 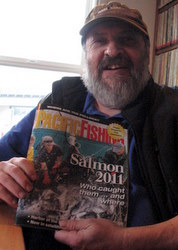 Swagel with a copy of Pacific Fishing, which published his poem “The Bight Before Christmas.” (KCAW photo/Robert Woolsey)

One of Swagel’s best ideas may have been borne out of desperation, with a holiday-season deadline, and a blank page in the Soup to fill.

T’was the night before Christmas
Throughout Sitka Sound.
Not a creature stirred
Anywhere on the fish grounds.
The hoochies were hung in the wheelhouse with care,
In hopes that St. Nicholas soon would be there…

This is Swagel reading from his 2003 poem, The Bight Before Christmas, which he subsequently had illustrated by artist Colin Herforth, and published in book form. It went over well in Sitka, and in Sitka’s fishy counterparts up and down both coasts.

I asked Swagel about it in 2011, when the book was featured in Pacific Fishing Magazine.

“The fishing culture is so strong, it’s like everybody ‘got it’ immediately,” he told me. “And that’s probably the most satisfying thing for me is to see people in Gloucester, MA, people in Port Orford, OR, people in Westport, WA, they just look at it and go ‘Oh, this is about us.’” 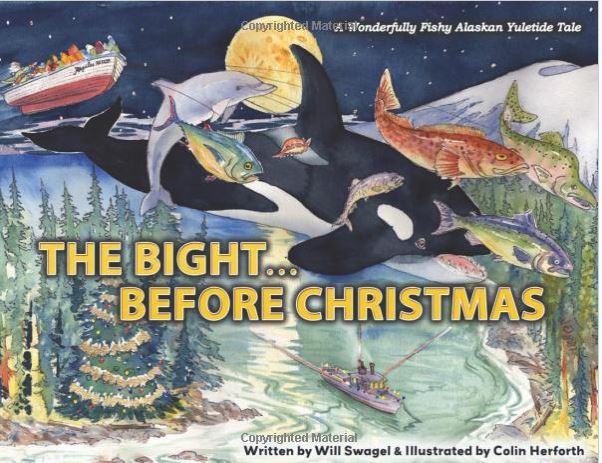 “If this is what I’m known for, I guess I would be pretty happy with that,” said Swagel of the book he published in collaboration with artist Colin Hereforth. “It’s sweet and authentic, and that’s what I’d like to be.”

Swagel honed his journalistic chops in Sitka. He and Suzanne moved here with their daughter Maria in 1982, and Swagel found work in the news department at KCAW shortly after the station got started. In 1988 he moved to the Daily Sitka Sentinel. 10 years later, they bought the Sitka Soup. Portello says she’ll continue to publish in print as usual, every two weeks — and online with their second daughter Hannah as “webmistress” — and either rerun Swagel’s many columns, or bring in new contributors to adopt the voice of the Soupster, for whom Portello has always served as editor.

So the Soupster will live on, and it doesn’t look like The Bight Before Christmas will be going away either.

Swagel seemed to anticipate this.

“You know if this is what I was known for I guess I would be pretty happy with that,” Swagel said. Because it’s sweet and it’s authentic, and that’s what I’d like to be.”

More song:Such is Life in a Little Town

Sweet and authentic? Now that’s how you get a song.

Will Swagel was 65 years old.