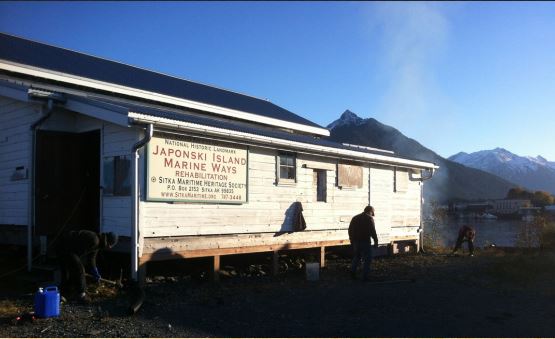 The Japonski Boathouse has a new roof, windows, and foundation. Plans are underway to create a maritime heritage education center in the building. (SMHS photo)

People in Sitka have always messed about in boats.

The Sitka Maritime Heritage Society is depending on the community’s historic love of the ocean to maintain the momentum behind it’s flagship project: The restoration of the Japonski Island Boathouse.

Society members Rebecca Poulson and Joe D’Arienzo updated the Sitka Chamber of Commerce recently on the status of the boathouse project.

Note: “Honoring Maritime: Then and Now” is the theme of this year’s 4th of July Celebration in Sitka. You can find details on our community calendar.

The Japonski Boathouse was built — along with much of the infrastructure on Japonski Island — during World War II as part of the Naval Operating Base.

Many of those structures have been repurposed: As the Mt. Edgecumbe High School dorms and field house, and the campus of the University of Alaska Southeast. 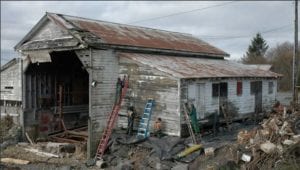 Under state ownership, the Boathouse had fallen into disrepair by the early 1980s and would have been demolished if the Sitka Maritime Heritage Society and the City of Sitka had not stepped in. (SMHS photo)

But the Boathouse fell into disrepair by the early 1980s, and would have been demolished by its then-owner, the state Department of Natural Resources, had not the Sitka Maritime Heritage Society stepped in.

Director Rebecca Poulson told the Sitka Chamber of Commerce (6-27-18) that restoring and improving the boathouse is the society’s main mission.

“So our big project is to restore this building for use as a public maritime heritage center,” said Poulson. “And that’s an obvious benefit: Building our visitor infrastructure, have activities, and ultimately it could be a destination and have long-term classes and programs.”

That’s the goal, anyway. The reality is that the Boathouse is a challenging structure to work with. It’s historic function as a boat shop and marine railway is not readily compatible with tourism.

But Poulson says the society is making it work. 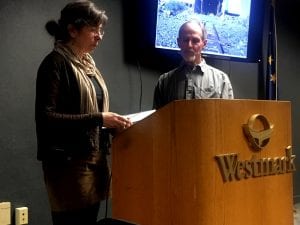 Rebecca Poulson (l.) and Joe D’Arienzo at the Sitka Chamber of Commerce. The Boathouse restoration is largely a volunteer project. “People love the water,” she said. “It’s our connection to each other.” (KCAW photo/Robert Woolsey)

“And in the building, as we’re redoing it, since it is part of a National Historic Landmark, we’re trying to preserve the feel of the building,” she said. “Our goal is to make it feel like it never stopped operating. So most of it is going to be completely as it was, except we need to have a toilet that just doesn’t run out onto the beach (laughter), and that’s accessible. So on the left is a small addition that we’re building onto it that will have a toilet, an accessible ramp, an addition with all our utilities.”

The historic purpose of the Boathouse was to service the shore boats which ferried passengers between Sitka and Japonski. Although the “airport” was located at the Halibut Point Road turnaround during that era, there was an entire community on Japonski called Mt. Edgecumbe.

Restoring the marine railway — which hauls out boats with a moving berth on tracks, like a railroad — is probably going to require its own fund raising effort of $400-500,000.

Part of the expense, Poulson and society board member Joe D’Arienzo explained, would be running a historic marine railway under contemporary expectations.

Poulson — In the old days it was a government facility for government boats. But if you’re hauling somebody’s half-million dollar yacht, you want to have everything dialed in.
D’Arienzo — Plus also, when they hauled the boat up they would wash them down so all that copper paint would go into the water. Now there are standards…
Poulson — We have standards! (laughter)
D’Arienzo — Yeah, we have to collect that (residue from washing down boats) and make sure it doesn’t hit the water. So that adds expense, of course.

The Boathouse is now owned by the City of Sitka and in the care of the Maritime Heritage Society, which has made significant progress over the last ten years. But there’s no timeline for completion, since everything depends on grant funding. D’Arienzo said the city had spent no money on the project, and there was no expectation that it would.

Poulson, however, was confident that the maritime education center would come to fruition. “We live in an amazing place,” she said. “And I think the water is the reason a lot of us live here.”