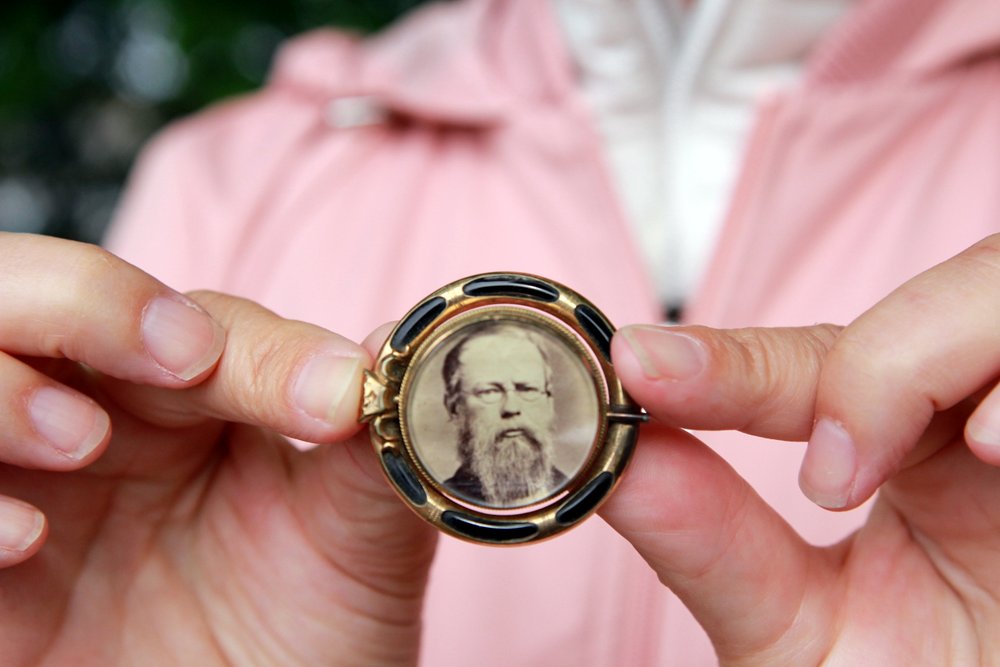 Patrice Bell visits Sitka’s Castle Hill with a small image of her ancestor, physician Heinrich Tiling, who stood on this spot 150 years ago to watch the transfer of Alaska from Russia to the United States. Tiling was the contract medical doctor for the Russian-American Company on two occasions — in 1851-2, and 1864-7. (KCAW photo/Robert Woolsey)

Not everyone who came to Russian-America in the 19th Century was Russian. People from around Europe were under contract with the Russian-American Company, to provide a variety of services to the company’s commercial colony in Sitka.

Among them was a Baltic German physician named Heinrich Tiling, who worked in Sitka on two separate occasions.

Recently, a descendant of the German doctor visited Sitka for the first time, to better understand her celebrated ancestor’s fascination with the region.

I’m standing on Castle Hill in Sitka, regarded as one of the most historic locations in Alaska, with Patrice Bell. A little over 150 years ago a member of her family stood on this same hill and watched the Russian Double-Eagle come down, and the 37-star flag of the United States go up. 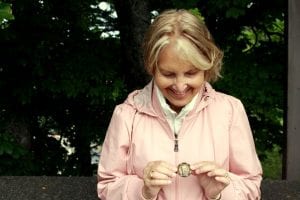 Bell — My ancestor was Dr. Heinrich Tiling, who was the last medical doctor to serve the Russian-American Company. He was a Baltic German, graduated from Dorpat University in 1844, made two trips to Sitka: One in 1851-52, and then he came back in 1864 and stayed through the changeover from Russia to America. Which is why I am here today.
KCAW — This is your first time?
Bell — Yes. I’m very, very excited and… emotional, to know that this is where he stood. And the settlement stood.
KCAW — So he came twice.
Bell — Yes, he did. He was employed by the Russian-American Company as a physician. He had two five-year contracts. And the second contract, he decided to stay in the United States. He took one year’s pay, with a return in six years. But sadly, he did not survive. He passed away at age 51 in 1871. 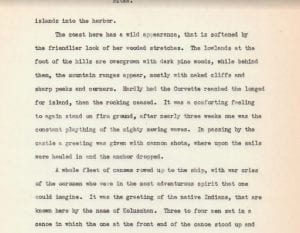 Tiling’s journals were translated from the German by his daughter, Bell’s great aunt. On his first voyage to Sitka in 1851 Tiling was quick to note the area’s distinctive species, like the Steller’s Jay. His observations of the indigenous people were typical of the era: He regarded the local Tlingit with both fear and awe. (Image courtesy Patrice Bell)

Tiling’s prolific journals survived, however. In fact, the record of his first around-the-world trip with the Russian-American Company was published in German in 1854, and subsequently translated into English by his daughter, Bell’s great aunt.

But like many physicians of his era, Tiling was about three-quarters naturalist. When he wasn’t tending to patients, he was taking detailed notes about the area’s flora and fauna.

Bell — So that’s how he filled his days, collecting specimens and then he’d send them back to St. Petersburg, Russia. And there have been some plants named after him: M.tilingii. So if you search botanical names, you’ll see some of his specimens.

Bell says copies of Tiling’s journals have been in her family for as long as she can remember, but they’ve only recently put the whole story together. Tiling had two families: His first remained under the care of friends when his wife was committed to a mental institution. He subsequently divorced and remarried, and this family remained in California after his premature death in a riding accident near Nevada City at age 51. The two families were unknown to each other, until recently.

Bell — Once again the internet makes the world a smaller place. There was a Wikipedia article about him which is fairly accurate — except for the part about the second family, since family members in Germany had no idea about our second family that stayed in the United States. So he was published in the botanical journals, the medical journals. His true love was botany — he really did enjoy this. And seeing what he saw just takes my breath away. It’s just amazing.

Bell shows me a tiny photograph of Tiling that might have come from a locket. Castle Hill means different things to people, but for Bell and her family it is a memorial.

Bell — This to me is my ground zero, in that we don’t know exactly where Dr. Tiling is buried. So this is my ability to connect with him, through this location.

Today’s (6-28-18) visit was just a day trip, a port call from the cruise ship Amsterdam. Bell says that she’s already thinking about returning for a longer visit. 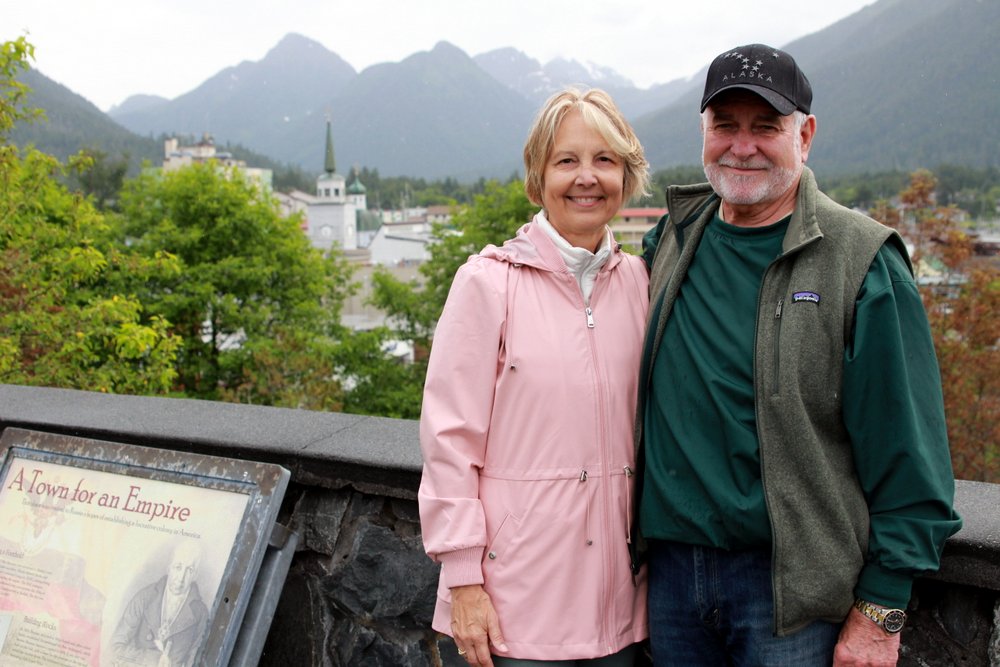 Bell with husband, John. The couple live now in Pacific Grove, California. While the journals have given her family insight into Tiling’s life, they don’t know where he is buried. “This place is our ground zero for connecting with him,” Bell says. (KCAW photo/Robert Woolsey)