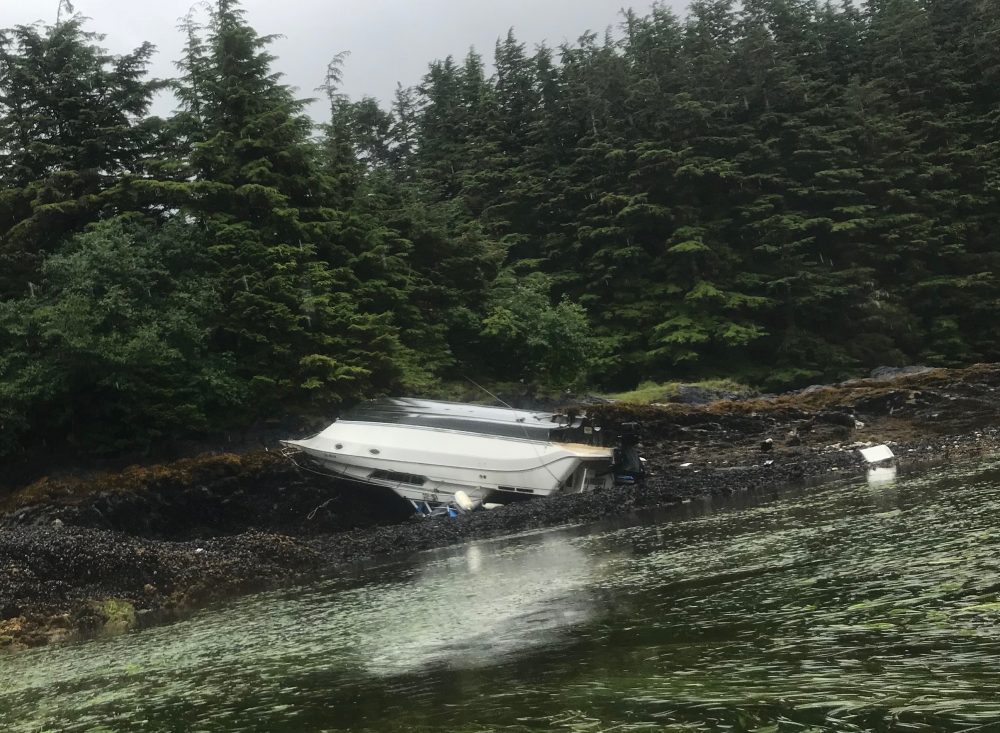 A 31-foot vessel, the Catalina Condor remains in Redoubt Bay, after it was intentionally grounded and then accidentally overturned when the tide changed. The owner is working with the U.S. Coast Guard and local resources to float the vessel. (Emily Kwong/KCAW photo)

A cabin cruiser grounded in Redoubt Bay on Friday (7-13-18) and remains overturned in the water. The owner of the Catalina Condor is working with the U.S. Coast Guard to salvage the vessel.

The Catalina Condor started taking on water on Friday, July 13th around 10:30 a.m., where Redoubt Bay meets Redoubt Lake. The rocky shore is a popular subsistence fishing spot and the sockeye are running strong.

Petty Officer 1st Class Ken Farah, federal on-scene coordinator, said it appears the vessel was beached on purpose. The owner and two guests went on shore and lost track of the incoming tide. The water then flooded the Catalina Condor.

“The owners intended to go back to town, get some pumps, and come back,” Farah said. “When they did, the vessel had rolled over. They’re having some difficulties to right it and get it off the shore.”

The Catalina Condor is 31-feet-long with a fiberglass hull and challenging to salvage. The owner completely defueled the vessel at the time of the flooding, removing portable containers of gasoline being used with an outboard. The main engines were not in operation, so the internal diesel tanks empty. While it still smells like fuel, it’s mostly residual. “It smells a lot worse than sometimes it is. It just evaporates so fast,” Farah said.

The Catalina Condor was registered last year as the Marianna. Homeported in Sitka, the owner is Mario Rivera. Rivera is working with the Coast Guard to mitigate any potential pollution and float the vessel.

While it’s not ideal for fuel to spill so close to a salmon run, Farah is glad that it was gasoline – a less harmful substance than diesel – and that all involved are safe. “Recovery efforts are still pending, but the owner is working on getting some resources identified,” he said.

Note: This vessel was involved in a previous near-sinking incident on June 19, 2018. Read more here.