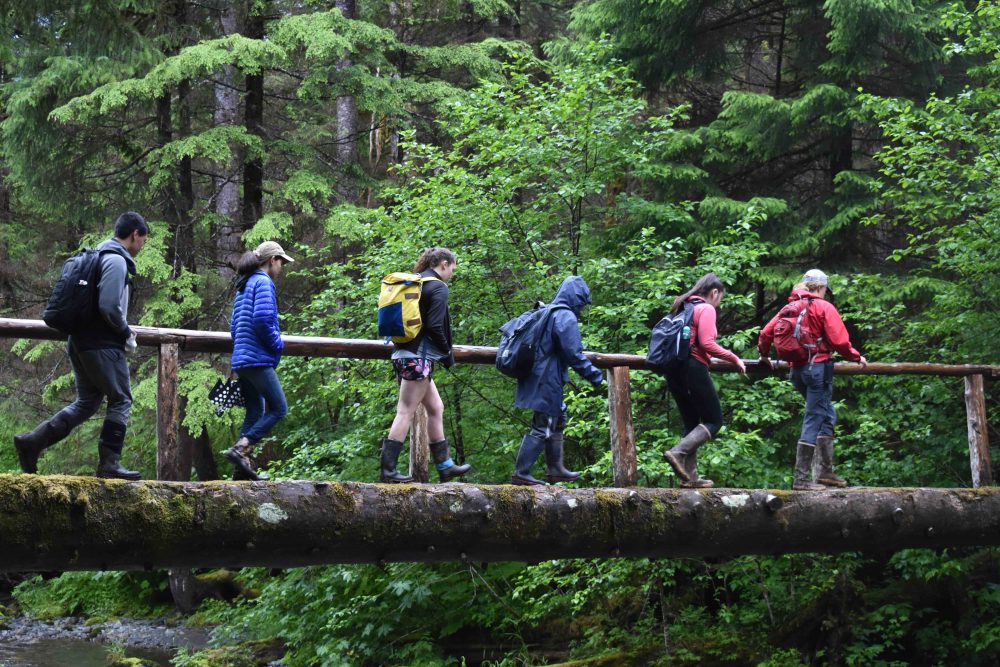 An organization called Outer Coast is gearing up to start a new two year college on the Sheldon Jackson College campus in Sitka. Their first step, this year, is to test out the curriculum and administration on a group of rising high school juniors and seniors. The curriculum, modeled after Deep Springs College in California includes three elements: classroom time, service work, and self-governance.

I’m with a group of sixteen high schoolers, at the head of the Indian River Trail in Sitka. We all tromp into the woods. The rain has been falling all day, heavy for a Sitkan summer. I ask a few students to hang back with me as we walk.

Michaela Blowe, from Willow, Alaska, tells me about the college-level course they’re all taking. “It’s about freedom and rights in a polarized world. The class itself is full of discussions and just coming up with different ideas and sharing those ideas as well as all the work that we’re doing is actually not for any grade… Like for essays we’re getting feedback but no numerical grade whatsoever.”

I ask her how that changes the work that she’s doing. “I’ve definitely noticed a drop in stress levels compared to school time,” she says, “but at the same time the topics are really interesting so I still want to learn about it.”

The college will also likely have some arrangement that deemphasizes grades. But they want to make sure students can transfer to a four year college if they want.

Jonathan Kreiss-Tomkins helped found Outer Coast partly as a way to offer a different kind of school. The education will include classroom time, service work–like this project–and self-governance, where the kids make their own rules and regulations.

“Students are given a lot of responsibility,” Kreiss-Tomkins says. “There’s not a lot of handholding. That, I think, is as important as any academic aspect of the program. Right now, at most college campuses if you make a mess, somebody has a party friday night, whatever, somebody else is cleaning it up for you.”

Kreiss-Tomkins laments what he calls “clientism” in higher education. That’s when schools treat their students more like customers than students. He says the service component of Outer coast is a contrast to that. “It’s not all about one trying to extract the best experience for oneself but to sort of direct and give outwards.”

Kreiss-Tomkins also hopes to offer a deeply committed faculty. He says a lot of typical faculty members aren’t prepared for teaching. He says, “Right now, in the US, you get a PhD, you often have little to no teaching experience and simply because those three letters are next to your name, it’s assumed that you’re a pedagogue.”

So far, in the classroom part of their education, the students have read Plato, Socrates, and a selection of Raven’s stories from the Tlingit tribe. Those readings and living in Sitka have piqued the interest of student Adrian Flinn from New York City.  He says, “I’ve become fascinated over the last few months with neocolonialism, and now looking at the history between Russians in this area and the Tlingit tribe. I’ve become more interested in that.”

Aside from class and their service trip, the students also have self-governance meetings. Flinn says, “On the second day we essentially set all the rules for the program, how we conduct ourselves around each other and the rules around free time whether we can go into town or not and technology use, if we can limit that and put some controls on that.”

The students set their own curfews for 10pm on weekdays and 10:30pm on the weekends. They want to function well early in the mornings for their classes and activities.

On the trail, we hop over puddles, climb over roots, and tromp through sticky mud. After about an hour and a half, we duck through a tangled trail and emerge in a mucky muddy path right next to a stream. Immediately the crowd divvies up buckets and a few kids jump down into the river bed and start collecting fist-sized rocks.

Charlie Ewell, from Lost Angeles, says, “Right now the service project we’re doing is on one of the trails in Sitka and we’re helping restoring or expanding the trail by paving the trail with stones.” 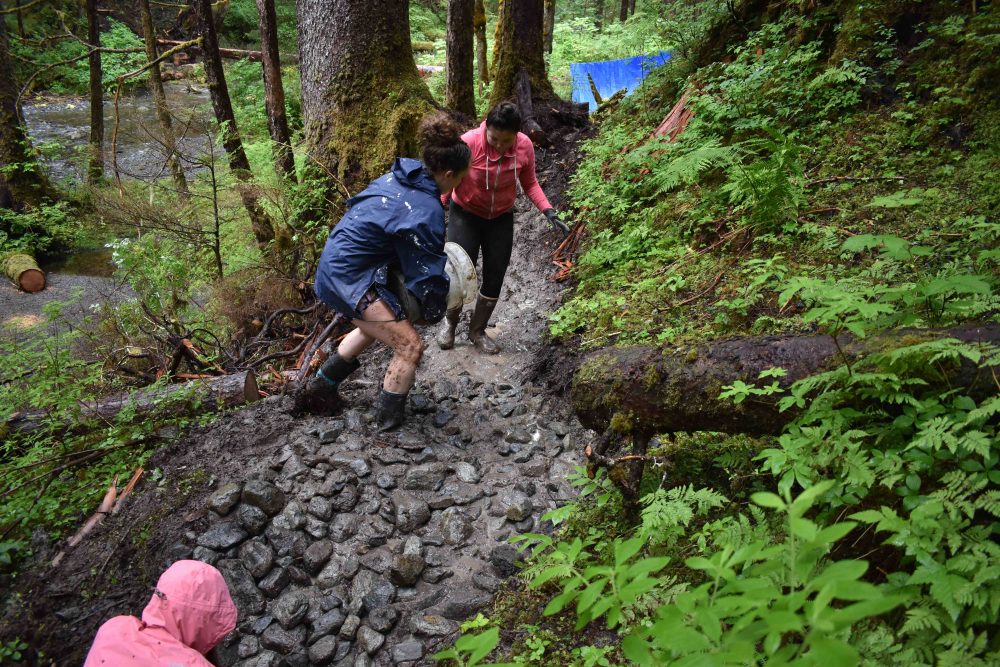 Once the rocks are collected, other students take the buckets and dump them on the path, stomping on them to squish them in.

I ask Ewell what he feels like he would gain being in a college program like this. He says, “An opportunity to have a different sort of education that’s not our traditional somewhat monolithic educational structure that we have in the US.”

Outer coast hopes to offer something different for their students, a balanced education that supports the whole person. They’ll likely be testing the program again next summer with more students, and perhaps after that, open their doors to undergraduates.

This article has been corrected. Deep Springs College is in California, not Colorado, where we originally stated.