Pook, VanCise make another run for Sitka School Board 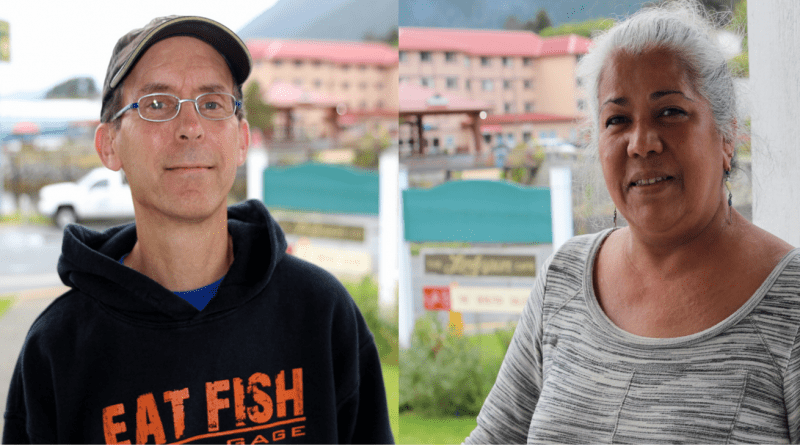 Two candidates have filed to run for another term on the Sitka School board this fall. After a year marked by budget constraints, the loss of a full-time school librarian, and the first layoffs of non-tenured teachers the district has ever faced, Cass Pook and Eric VanCise are gearing up for another school board run, knowing there may be more difficult decisions ahead.

57-year-old VanCise moved to Sitka nearly 25 years ago from Hoonah as a forest service employee. He worked for SEARHC EMS department throughout the late 90s. In 2014, he was hired on as the gear manager for the Alaska Marine Safety Education Association.

He was voted onto the board three years ago when the district began to see the writing on the wall with state budget cuts and how those would impact local schools.

“With the state, federal and local budgetary constraints going on, we come down to literally looking at pennies and expenditures,” VanCise says. “It’s the very least favorite option- losing any staff.”

VanCise says if he’s elected for another term, his top priority is protecting teachers jobs

“What can we do to try and stave off these kinds of uncertainty with tenured and non-tenured staff?” Vancise says. “It gets down to where you’re looking at things like the performing arts building.”

Funding the Sitka Performing Arts Center was a hot button issue during the last school board session, with supporters of the PAC turning out in large numbers at school board meetings. The PAC operates with a budget of $240,000. VanCise says he hopes in the future the board can find a way to make the building “revenue neutral.”

“When you look at the overall budget, it’s not a big piece of the pie,” VanCise says. “But when you find out that there are some operational funds there that generates a lot of public discussion and interest.That’s one of the secondary things I’d like to continue to work with- ways for the performing arts center to hopefully at some point become revenue neutral so we don’t have to look at things like that to save a teacher’s position.”

Also running for re-election is 56-year-old Cass Pook, born and raised in Sitka. For the last 18 years, she’s worked for SEARHC in behavioral health. She’s been on the school board for 17 years, the longest of anyone currently serving.

Pook says the biggest changes have been reductions in Secure Rural Schools, a federal program that allows money from the Forest Service to be redirected to the school district at a higher rate, and the drop in the price of oil.

“They have really worked hard to take a lot of the wiggle room out of our budget,” Pook says.

She’s also on the board for Alaska Association of School Boards, and says if re-elected she hopes to continue to advocate on a state level. And as the longest running board member at the Sitka level, she believes her perspective can help add context for other board members.

“It’s important to have the history of our budget sessions and how things have changed dramatically in how we build revenue, how we handle taxes in the city of Sitka,” says Pook.

Both Pook and VanCise said collaboration is key to their decisions to return to the board. VanCise says he’s proud of the way the board and staff have worked together this year, mentioning an application called “Padlet” that allowed the board to poll staff, anonymously.

“While it wasn’t perfect, it enabled us to have a series of questions that staff could respond to anonymously- it really increased our input and involvement of the staff,” VanCise says. “The end result- when we got to the end of a very difficult budget season, I tend to think that the staff and us as a board felt like we really gave it an honest effort.”

Though they both lament frustrations with the budget and funding, they both remain optimistic.

“I really truly believe that we’re going in the right direction,” says VanCise.

Pook and VanCise will run for reelection this fall. The municipal election is October 2, 2018.