This is the last week to file for public office in Sitka and one of the candidates for the Sitka Assembly is familiar with the job. Former mayor Valorie Nelson turned in her candidate packet on Thursday (7-26-18). She wants the Assembly to look at reducing the size of government before taxing citizens further. 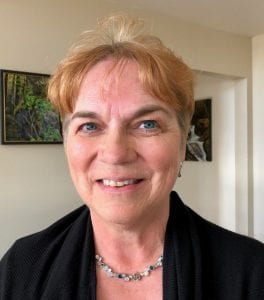 A lifetime resident and the former mayor, Valorie Nelson is one of five candidates running for the Sitka Assembly. (Photo courtesy of Nelson)

Nelson graduated from Sitka High School and held jobs all over town. She was a laborer and forklift driver at the Alaska Pulp Corporation. She now works as a budget analyst for the U.S. Forest and maintains a bookkeeping service, as well as commercial and residential property.

If you recognize Nelson’s voice, it’s because she served on the Sitka Assembly before, as Mayor from 2000 and 2002 and as an Assembly member from 2004 to 2005. In between, she battled cancer.

Nelson says she’s ready for another go-around on the Assembly. Currently, citizens have three minutes to testify on an issue, on or off the agenda. That frustrates Nelson.

“We as the public have basically lost a voice. When you put time constraints on public testimony, you’re discouraging people from telling their story. And I just believe that’s wrong,” she said.

Process aside, Nelson is also frustrated by the Assembly’s strategic direction, particularly their recent decision to repeal the senior sales tax exemption. She wants the Assembly to consider other pockets of revenue.

“There are things, like the sin taxes. Alcohol could be charged at a higher sales tax. I think [the city] should put the property tax back on boats. That’s a lot of money. I think they should look at putting an excise tax on marijuana,” she said.

Nelson also said she’d like the Assembly to consider “wants” vs. “needs,” reducing the size of government where they see fit and minimizing utility rates increases moving forward. “It’s just common sense that you just can’t keep squeezing those turnips and expecting to get blood out of them,” she said.

On Thursday (7-26-18), Brinnen Carter also filed to run for the Sitka Assembly. Since moving to Sitka five years ago with his family, Carter has been a resource manager for Sitka National Historical Park. He referees high school soccer and is on the board for the Sitka Maritime Heritage Society.

While traveling, Carter answered a few of KCAW’s questions via email. When asked why he was running for the Sitka Assembly, he said several community members encouraged him to run, saying he had a “good personality for the job.”

He added, “After listening to and attending almost five years of Assembly meetings, my first priority would be to learn how Sitka functions in more depth, as well as the role Sitka’s municipal government plays in the community’s maintenance and development. With that knowledge, I will be much more effective as a representative in helping to improve the community’s overall welfare.”