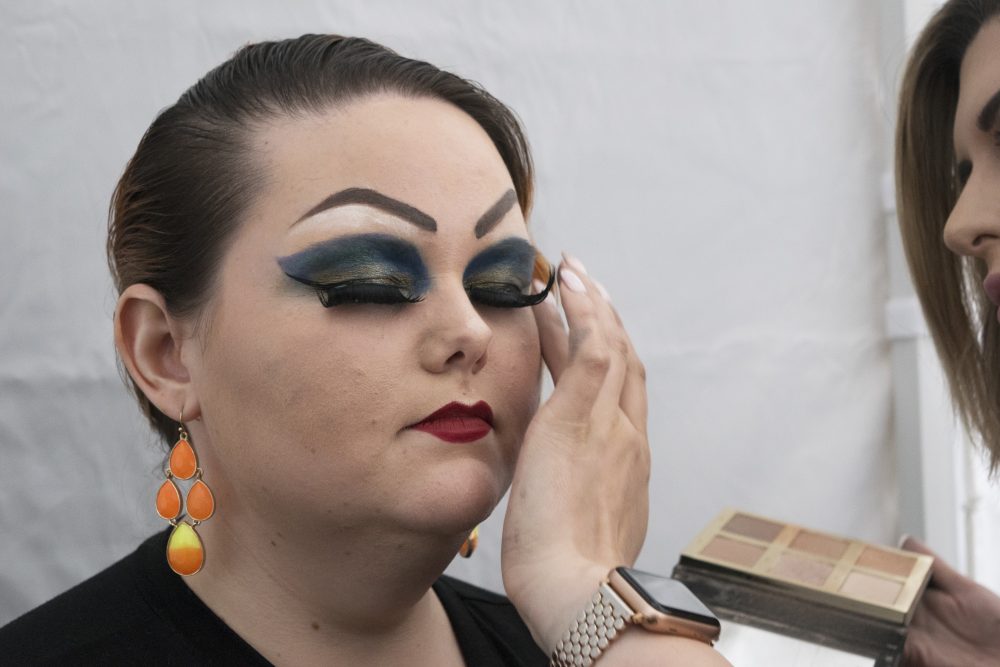 Drag shows are an important part of queer culture all over the world. On August 4, 2018, Sitka had its very first show. Although it was a bit of a risk, the producers and performers believe the show was a huge hit, and a welcome success for Sitka’s queer community. Two headliners — both professional drag queens — traveled from Juneau and Tacoma to support the local cast.

The first floor of the Mean Queen restaurant is sold out. About 120 mostly-female audience members scream and cheer, and some hold dollars up in the air to tip Lola Monet, a drag queen from Juneau.

Monet wears a low-cut black dress, pearls, and hip pads to fill out her curves. Like many drag performers, she prefers female pronouns when in her drag persona. The Sitka show is only her fourth performance. She calls herself “a baby drag queen.”

Monet has always been drawn to drag. She says, “I’ve loved dress up, ever since I was a little kid. It’s dress up, it’s play time. And my family was Southern Baptist. And after I started playing with ladies clothes, I was never allowed to play dress up again. So I love doing drag. Its allows me to express the feminine side of me a little bit.” 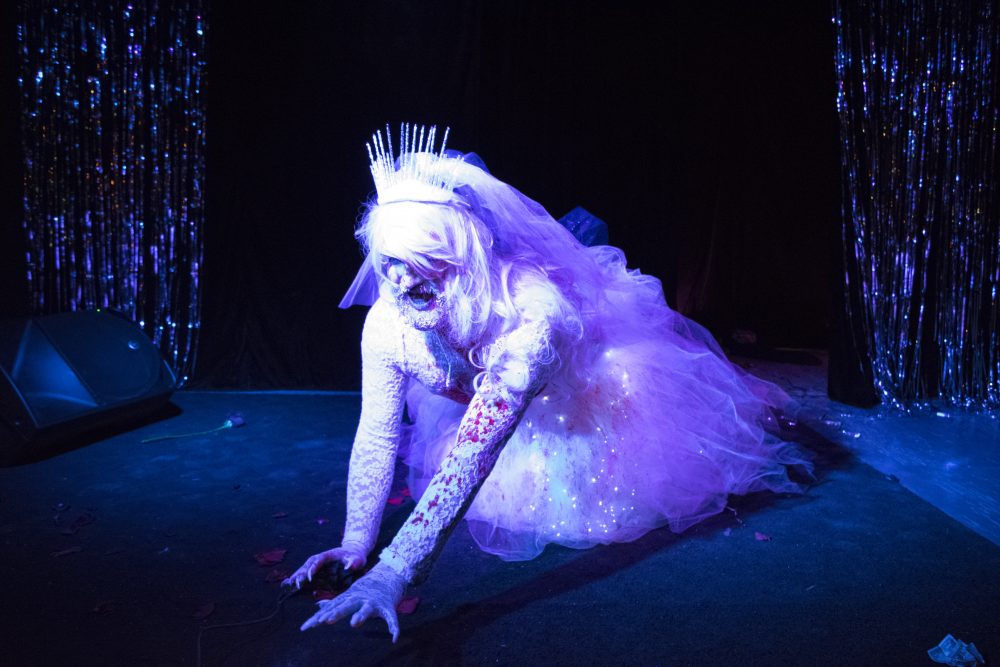 For Ann Poindexter, the other headliner, drag has also allowed them to play with gender in a way they weren’t allowed growing up. Poindexter uses the pronouns “they” and “them.” They grew up Mormon in Utah.

They say, “I was very deeply religious for about 23 years from age zero to 23. I was raised to believe that being queer is an abomination and that it would mean eternal damnation and sadness for me.” Poindexter has a thick beard and fake eyelashes, neutral lipstick, and a tan dress. In Poindexter’s adult life, gender identity has become incredibly important to them.

They say, “And especially that space between what is traditionally defined as what is masculine and feminine is where I feel the most comfortable and at home.” Poindexter is fortunate; their family has overcome religious barriers and grown to accept and embrace Poindexter’s gender expressions.

They say, “So, they’re actually incredibly supportive and cool now. It just took us a few years to get there.” And Poindexter’s family was also a source of inspiration for their early drag impulses. They say, “My mom was a seamstress, so as a little kid she would make me these extravagant outfits (2:42) and even though it wasn’t Halloween, I would tear through the wilderness of Utah dressed like a total freak.” 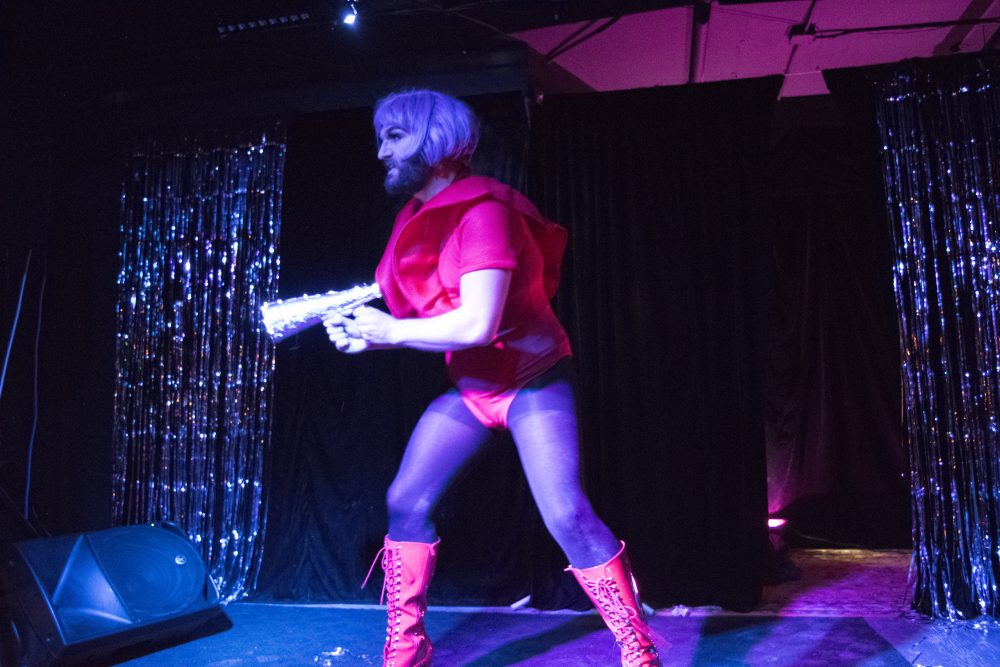 The show wasn’t only a space for the experienced headliners, though. A number of local performers experimented with drag for the first time. That includes Greg, aka Bailey Craig, the emcee of the event. I ask Craig to describe their outfit. They laugh. “I am wearing a hideous auburn wig. It’s absolutely terrible and I’m wearing a fake moustache. And cargo shorts and a cream-colored polo with red and green stripes and Birkenstocks and socks. I’m essentially the typical white dad. It is so far from who I am as a woman and how I identify as a woman.” 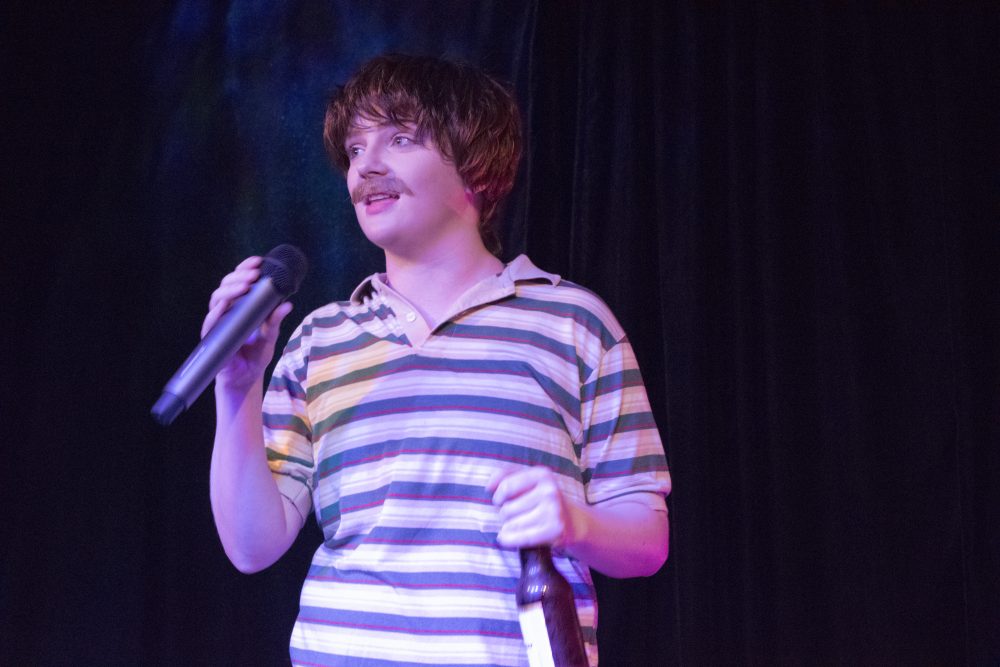 The creators were overwhelmed with the rush of support from the community. The show sold out in 36 hours, without even a formal event announcement. Jessica Henry was one of the show’s producers. I asked Henry why she decided to help produce a drag show here. She says, “So I feel like the artistic community here is very receptive and excited about new events and I just felt like that ever since I moved here, the queer community isn’t represented.”

Creating a queer space has already affected Sitka. Here’s Aren Vastola, a lifetime resident, who enjoyed the show as an audience member: “It’s really great to see this kind of gender nonconforming performance in Sitka. …As a member of the LGBT community myself, it’s also kind of really comforting and reassuring to see people coming out both like not just to see a show but also in support of that.”

These kinds of spaces have the potential to create a more queer-friendly Sitka. That includes a culture with space for kids growing up queer and questioning. I ask Poindexter if they have any advice young people who might be drawn to drag. They say, “Just experiment. Like just put on heels if you’ve always wondered what would it feel like to put on heels.”