Murkowski on SCOTUS nominee: “I will be guilty of taking my time” 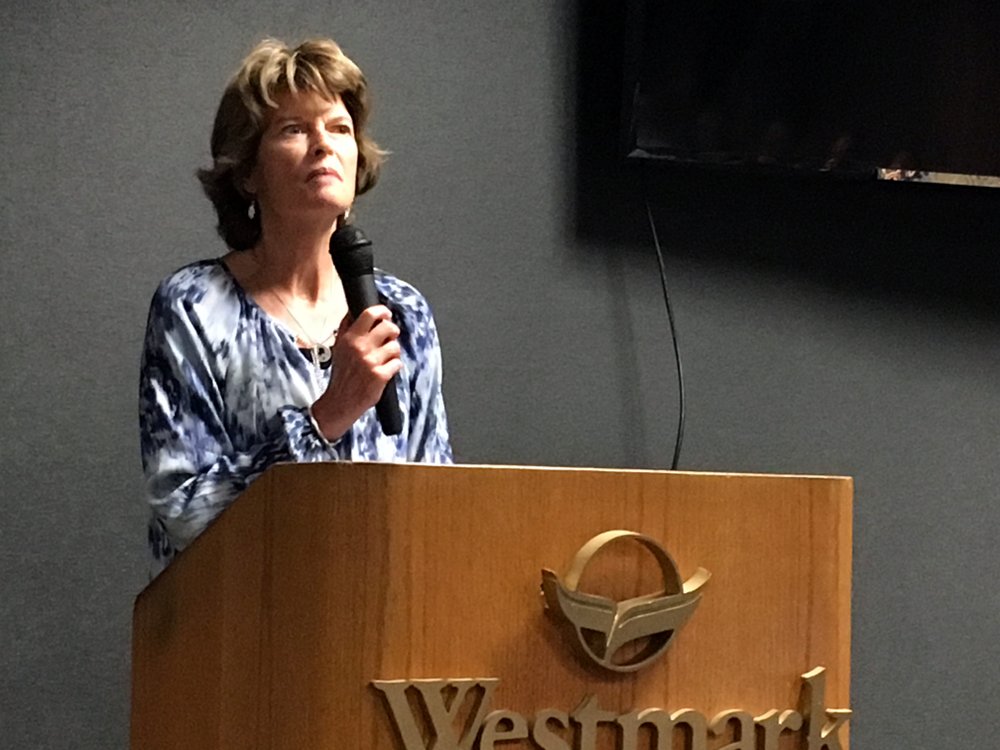 Sen. Lisa Murkowski told the Sitka Chamber that there’s good news/bad news regarding Judge Brett Kavanaugh. “The good news is that he’s been on the federal bench 12 years and has written over 300 opinions. That’s also the bad news!” Murkowski says Republicans on the Senate Judiciary Committee have requested 900,000 pages of material to review. “So don’t expect hearings in August,” she said. (KCAW photo/Robert Woolsey)

Alaska Sen. Lisa Murkowski is not showing any of her cards, as theSenate is poised to begin confirmation hearings on Judge Brett Kavanaugh’s nomination to the US Supreme Court.

In remarks to the Sitka Chamber of Commerce on Wednesday (8-8-18), Sen. Murkowski said “I will be guilty of taking my time.”

Alaska’s senior senator is again in the political spotlight as attention turns to the confirmation hearings, which could take place as early as this fall.

Ever since she defied Republican party politics and cast a no vote on the so-called “skinny repeal” of the Affordable Care Act last year (along with senators Susan Collins and John McCain), Murkowski has been seen as a moderate swing vote in a senate that has grown increasingly polarized along party lines.

The Kavanaugh nomination has been characterized by opponents as an attempt by President Trump to stack the court with justices likely to overturn Roe v. Wade, the 1973 ruling which made abortion legal.

Murkowski, however, is regarded as a supporter of women’s rights. She’s also a lawyer, and she’s going to personally read some of Kavanaugh’s opinions, and then meet with the judge in person later this month.

Murkowski told the Sitka Chamber that her thoughtful approach has already inflamed people on both sides of the issue.

“I have done something — call it a little bit novel — but I said I actually want to do a little studying about this person before I sit down, because I want to be able to ask informed questions,” she said. “I want to do my due diligence. Well I tell you I’ve gotten heat from both sides on this. Some people are like, ‘You need to say NO yesterday!’ Okay, I appreciate your view, but just allow me the time to really dig into this and to be able to ask questions and to be able to listen to what’s going on at the hearings. Others are saying ‘You need to support Trump’s person yesterday!’ So it’s the proverbial Damned if you do, Damned if you don’t. I will be guilty of taking my time to do my homework.”

Sen. Lisa Murkowski touched on a number of issues in her hour-long presentation to the Sitka Chamber of Commerce Wednesday, including her success in moving appropriations bills for the Forest Service, earthquake monitoring, and essential air service.

She strongly backed building a new ice breaker for the Arctic, suggesting that with so much attention on the US southern border, Congress was neglecting the northern border.

Murkowski said she was concerned over President Trump’s trade strategy, which has prompted retaliatory tariffs on on Alaskan seafood and petroleum exports.

She also had strong words for the administration’s controversial policy of separating detained parents and children at the border — since reversed by the president — saying “We are a country of compassion. We don’t rip families apart.”

And in response to audience questions, Murkowski supported net neutrality, access to financial services for Alaska’s legal cannabis industry, and for action on climate change. “We’re a fossil fuel state,” she said, “but we’re seeing impacts in our coastal communities that should be a wakeup call.”

The Supreme Court selection process has always been politically volatile. Republicans successfully blocked confirmation hearings on the nomination of Merrick Garland, President Obama’s pick in 2016, the final year of his presidency. And Republican senate president Mitch McConnell in 2017 engineered a change in senate rules to require only a 51-percent majority to confirm a justice — which happens to be exactly the current number of Republican seats — and it proved to be critical maneuver to the successful appointment of President Trump’s first nominee, Neil Gorsuch.

Murkowski says she doesn’t know if her role as a Supreme Court swing vote has had any specific bearing on her personal legislative agenda. In a conversation with Sitka media following her chamber presentation, she remarked on a stronger sense of collaboration among her Republican senate colleagues — and it’s working for her.

“When you have a one-vote margin, it almost by definition requires you to figure it out together, because otherwise that one person going south can make all the difference,” she said. “Some would say a very narrow margin is an awful thing legislatively. I think it actually forces a level of cooperation between the two parties, and that can be useful because I am one who is known to work across the aisle on many issues. I have colleagues who come to me and say ‘Can we build something here, instead of blowing things up all the time? And I think that puts me in a position of being able to help advance some things that are good priorities.”

With the Senate returning to work early this August, Murkowski will only visit Southeast on this trip. She’s unhappy about the shorter-than-usual Senate recess, since it doesn’t allow her time to travel the state. As a result, she quipped to the Sitka Chamber, “I’m known as the chair of the Cranky Caucus.”