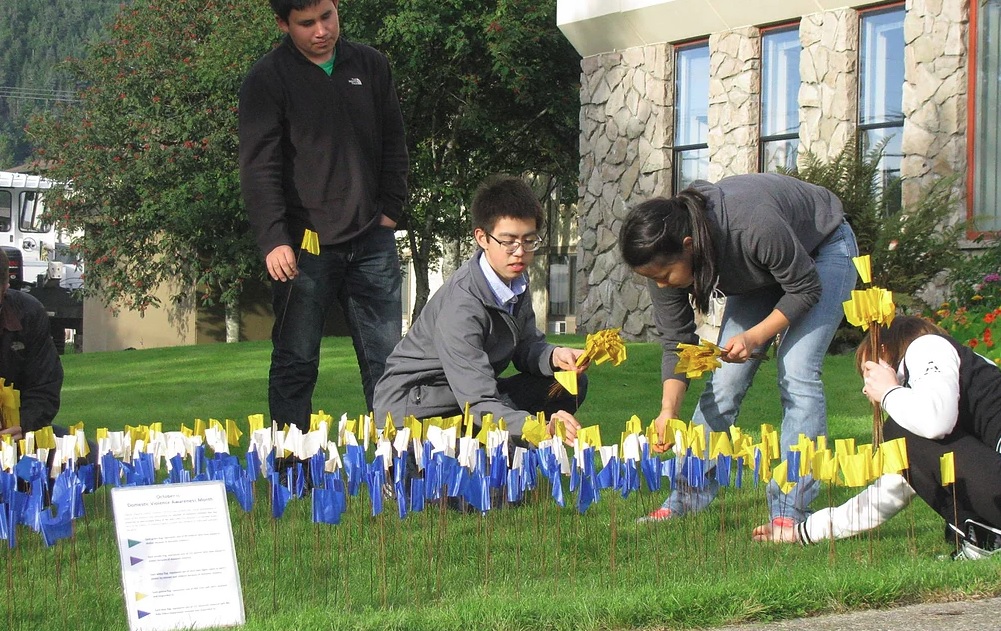 Martina Kurzer has light brown hair cut short, a broad smile, and a palpable passion for educating the public about domestic violence. She calls it “interpersonal abuse” or “interpersonal violence” because many people think domestic sounds outdated. She meets with me in KCAW’s studio and shares the results of her six months of research.

“In the first quarter, January through March,” she says, “we had 29 incidences of personal violence in the police blotter and we had 23 charges or arrests in the police report. That’s substantial. And then in the second quarter of this year we had 16 mentionings or calls to the police department about some kind of interpersonal violence. And 12… enforcement actions that resulted out of this.”

Lieutenant Lance Ewers of the Sitka Police Department agrees with this assessment of the frequency of domestic violence.

He says, “If I were to be asked how often do our officers investigate, the crime of domestic violence, I would say multiple cases a week. In our lovely town, which is a great town, and it’s no different than any other place in America.” Ewers says many of those cases are from repeat offenders. And alcohol and drugs play a huge role in these disturbances.

He says, “In my law enforcement career, I couldn’t even begin to count how many domestic violence investigations I’ve conducted, and I could probably count on both hands how many didn’t have an alcohol nexus to it. Or a drug nexus to it. It was a sober domestic disturbance. And I’ve been a cop since 1999.”

But data from police reports only reveals a small percentage of domestic violence cases. This is partly because not all incidents are reported. Kurzer says, “So if there are 45 cases of callers in Sitka, in six months, I must say there is probably at least ten-fold of incidences of interpersonal violence in our homes.”

It’s also because not all forms of domestic violence are crimes. Ewers says, “There’s physical abuse and there’s mental abuse and they’re very often tied together, All that mental abuse is taxing, that’s hurtful. However, that’s not criminal.” But, Ewers says, threats of physical violence are criminal. People can get arrested or incarcerated for threatening their partner with violence.

Kurzer says SAFV has a wider definition of interpersonal violence. And their services are meant to help anyone experiencing any type of abuse or violence. She says, “For SAFV and all other entities that work in this field, domestic violence is actually defined as a systematic way of one intimate partner to gain power and control over another… and this putting down does not have to be physical.”

Kurzer relays a recent incident she read in the police blotter. She says, “A woman called that her significant other had thrown out her belongings and was refusing to give her her portion of their tax returns. You hear that often. One guy throws her belongings out of the house. That’s economic abuse.”

Economic abuse can be a way for partners to exercise control and power over a partner. According to SAFV, partners threatening to take the children away or threatening to commit suicide are abuse. So are efforts to isolate a partner from their family and friends.

Blumer says, “He threatened to- threatened to kill my kids… I was never allowed to go anywhere without him.” She adds, “He used to have this game where he would strangle me until I passed out.” But partly through SAFV, she was able to escape the relationship and its threats. Now she works for SAFV.