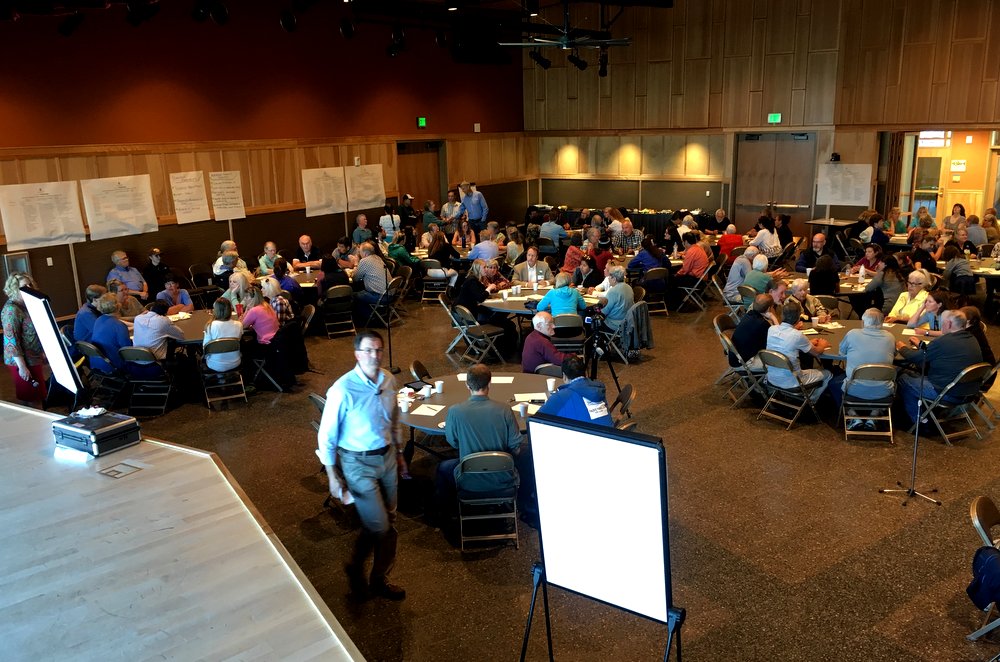 Facilitator Kurt O’Brien puts about 200 Sitkans to work identifying priorities for health care in the community. Although no consensus was reached, one older speaker suggested that it was time to let go of outdated ideas about SEARHC. Pointing to a young woman he said, “Think about her. Forget about the past and look to the future.” (KCAW photo/Robert Woolsey)

The residents of Sitka are no more decided about the future of their local hospital than their elected representatives, if Monday night’s town hall meeting (8-20-18) is any indication.

More than 200 Sitkans turned out to share their views on whether to sell Sitka Community Hospital to the Southeast Alaska Regional Health Consortium, and found no clear consensus on a way forward.

Note: The Sitka Assembly will meet to deliberate the three proposals for the management of Sitka Community Hospital at its next regular meeting at 6 p.m. Tuesday, August 28. The hospital will be the only item on the agenda. Mayor Matt Hunter has said he will extend public testimony to the following evening, if necessary.

Watch the August 20, 2018 Town Hall meeting in its entirety.

Actually, there were two other proposals on the table — from Quorum Health Resources and the Sitka Jet Center — but they had no traction at all, and struck many as slightly ridiculous.

Asked by Seattle-based facilitator Kurt O’Brien to take a side-by-side look at the three proposals, most people said some version of this.

“We didn’t really follow the guidelines to a T,” said a table spokesman, prompting some laughter among the audience. “But we did have some really great conversation. And at the end of the day we all agreed that Sitka Jet and Quorum weren’t really viable options for our community.”

Sitka Jet Center over the past couple of years bought and completely remodeled the Sitka Hotel. Many expressed concern that the hospital was much more than a real estate transaction. Quorum has a huge client base in hospital management, major resources at its disposal — but high costs. Nearly a half-million dollars a year, not including executive salaries.

So it really boiled down to whether or not to accept the SEARHC proposal, or keep things going as they are.

On paper, SEARHC’s plan is compelling: The acquisition of the hospital business for $9-million, guaranteed employment for all staff, assumption of pension liabilities, a five-year lease of the hospital building from the city for $140,000 a year, and Sitka gets to pocket the $900,000 in tobacco taxes it’s been diverting to the hospital every year.

Doug Osborne was the spokesperson for a table consisting entirely of Sitka Community Hospital employees. They were surprisingly amenable to the proposal — especially the prospect of a brand-new facility in the future — and shared other feelings best described as mixed.

“And we also liked the idea of the resolution of competing for patients,” Osborne said. “In the last five or six years there has been tension and competition for patients. Some concerns that we have are that once the local control is gone permanently, will there be a lack of choice for patients — and for employees — if there’s just one provider in town. We had a concern about whether like jobs will really be like jobs, in terms of the scope and the compensation. They said no layoffs, but will those jobs be equivalent. And then we had a big concern about will they even be in Sitka? The proposal says ‘throughout Southeast Alaska’ and throughout the consortium. So if a job did go out of town, what would be the effect here?”

The question of local control and SEARHC’s reliability came up over and over again. The consortium is a compact between 15 Southeast tribes; its board is not publicly elected, and their meetings are held in private. This is a contrast to how Sitka Community Hospital has been run since 1956, more or less as a department of the city, overseen by a board appointed by the assembly. What’s gone on at Sitka Community Hospital hasn’t always been pretty, but at least the public has had an indirect measure of control.

Doug Osborne’s table of hospital employees had a unique way of summing it up.

One table, represented by Lesa Way, had a more concrete suggestion: Put a member of the Sitka Assembly on the SEARHC board.

Trust was at the core of other audience concerns: Would all patients have the same access to care as SEARHC’s Alaska Native beneficiaries? What about SEARHC’s policy of Native preference in hiring?

Maybe even at the speed of trust, the process was moving too fast. Table spokesperson John Holst said that his group thought it was okay to take a step back.

“Some of the people at this table like the idea that we ought to be taking a year, hiring a new CEO, and see what happens,” said Holst.

That remark generated the first smattering of applause of the evening. Current Sitka Community CEO Rob Allen says he’ll step down when his contract ends this October. Barring an economic cataclysm, Allen believes the hospital is in good financial shape for at least the next two years. In fact, for just the first month of the new fiscal year, July 2018, Allen reported net revenues of $455,000.

The hospital board, nonetheless, is holding off replacing Allen until the assembly has made a final decision on the SEARHC proposal.

As the town hall moved into open forum, individuals argued for either moving forward into the future with SEARHC, or at least putting the question to a vote of the public.

David Sam suggested that misconceptions about Native preference were distracting people from really understanding the benefits of consolidation and the quality of services. He said that the number of Native employees at SEARHC was lower than many believed.

“Indian preference in this community is misunderstood,” said Sam. “The number of Native patients is misunderstood. But consider this also: The funding level has never been enough to serve the indigenous population.”

Dr. David Vastola, the medical director at SEARHC, said that the organization’s clinics in Southeast’s rural communities have always served Native and non-Native patients equally. He pointed to the success of the Haines Clinic, and of the Alaska Islands Community Services clinic in Wrangell. As a thirty-year resident of Sitka, he said he understood the pride people took in Sitka Community Hospital, but that it was time to set aside differences and work together on common vision for health care in the community.

“And I think we need to roll up our sleeves and do the hard work of addressing the hard questions on the table,” Vastola said. “Questions around equal access to care, around equal access to employment and to advancement, and around a voice with governance. And if we’re not willing to do those things, we’re not going to make this happen. It’s about trust, but trust that’s verified. We need to take the time to grind this out and make sure we do this right, because this is a big step. All of these things can be written contractually in a way that you can be assured you’ll always have a voice and that these things won’t change.”

Several others also pointed to the magnitude of the decision, and the fact that Sitka was at a turning point. Former Mayor Dan Keck, a central figure during a previous community pivot following the closure of Sitka’s pulp mill in 1993, displayed zen-like calm as he offered Sitka’s current assembly members this advice: “Whatever decision you make, we can live with.”