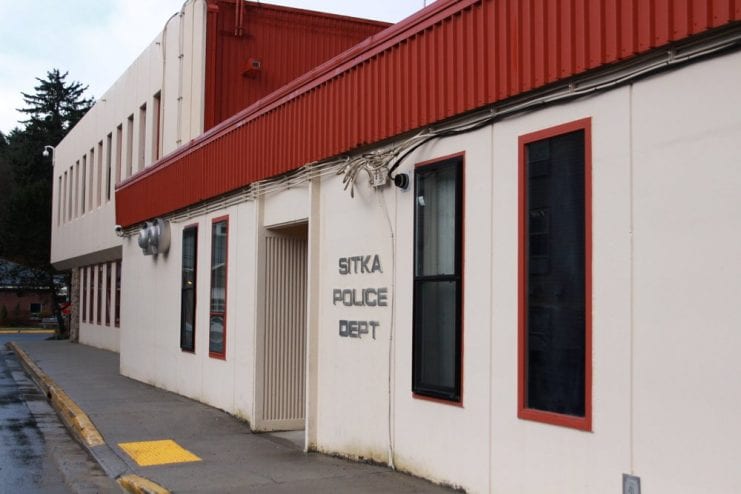 In addition to alleging retaliation against him for questioning the purchase of automatic weapons, former Detective Ryan Silva claims that the department scrutinized his timesheets and questioned his military service in the Coast Guard Reserves — both in an effort to harass and intimidate him . (KCAW file photo)

A Sitka police officer has filed a whistleblower lawsuit against the city.

Although the suit asks for no monetary relief, other than “actual and compensatory damages,” the 14-page document casts shade over the procurement and investigative practices of the Sitka Police Department.

In the suit, veteran Sitka police detective Ryan Silva alleges that the police department purchased five fully-automatic weapons in November of 2017, in secret, and in violation of department procedures.

In this still image from a recruitment video on the Sitka Police Department Facebook page, an officer is shown holding one of several military-style weapons in the department’s armory. In his suit, Silva alleges that 5 automatic weapons were improperly procured, out of the view of the public. (SPD image)

Silva, who serves in the US Coast Guard Reserves and is one of the department’s firearms instructors, believed the automatic weapons to be extremely dangerous in untrained hands. When he brought his concerns to the attention of Chief Jeff Ankerfelt, however, Silva alleges that he was ignored. He then took his concerns to municipal administrator Keith Brady — an action which he alleges triggered a series of escalating retaliatory conduct by the chief and lieutenant in the department.

Silva joined the Sitka Police Department in 2008 after a career in the Coast Guard, and was promoted to detective in 2011. According to the suit, most of his caseload involved sex- and drug-related crimes, as well as violent crimes. Silva alleges that his investigation of the possible sexual abuse of a 5-year old involved an older child of social friends of the department’s lieutenant. When he refused to back off the investigation, Silva alleges that he was demoted to patrol officer.

Not long after, in July of 2018, Silva’s girlfriend — the only sworn female officer in Sitka — filed a sexual harassment complaint against the department with the Equal Employment Opportunity Commission. In his suit, Silva alleges that his support of his girlfriend and fellow officer prompted a formal reprimand from Chief Ankerfelt. He was subsequently placed on administrative leave, and relieved of his badge and gun — both of which he alleges are extraordinary measures.

The suit was filed in Sitka Superior Court on Monday, August 20, by the Anchorage-based Northern Justice Project. As of Thursday, the City of Sitka had yet to be served. In a typical civil suit, a defendant has 20 days to reply from the date the brief is served.