The SBA in Alaska: Big resources to help small business

A cabinet-level agency of the US government, the SBA has surprising resources for entrepreneurs. (SBA image)

The Small Business Administration may be the most unsung resource for entrepreneurs in Alaska.

The cabinet-level agency offers guidance and training for people interested in starting businesses, it guarantees loans, and — in some cases — it offers direct financing of up to $5-million.

Marichu Relativo is the deputy director of the Small Business Administration in Alaska. Speaking recently at the Sitka Chamber of Commerce (8-22-18), Relativo tells an inspiring story about her boss, the co-founder of World Wrestling Entertainment. 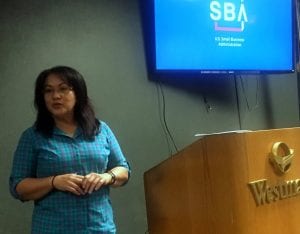 Alaska SBA deputy director Marichu Relativo at the Sitka Chamber of Commerce. She described all of Baranof Island as a “HUBzone” — or historically underutilized business zone — and eligible for special financing from the SBA. (KCAW photo/Robert Woolsey)

“She’s Linda McMahon, the owner of the WWE,” said Relativo, putting up a slide of McMahon’s picture — a well-known face in pro wrestling. “She is a business owner herself. She started her business in her home with her husband, and did really well…. Did you say ‘wrestling in the living room’? That’s funny! Anyway, she had a successful business but, guess what? It went bankrupt. They lost everything. In fact she was pregnant with a child when the repo people came and took her car away. Did they give up and say, ‘Okay, we’re not meant for a business’? No, they put their feet on the ground and said ‘Let’s do this again,’ to where they are at today: multi-billionaires.”

Relativo is originally from Guam and the Philippines, but has spent the past three decades as a civilian employee of the military, where she specialized in government contracting.

She explained that government contracts were a potentially lucrative area for small businesses, and didn’t require infrastructure or inventory. She said that contractors often supplied small orders — like 150 Fitbit watches — by simply acting as the middleman between the manufacturer and the government.

But Relativo also explained that starting and running a small business involved planning. The SBA has free — or mostly-free — programs to help entrepreneurs chart their course.

“If you don’t have a business plan — you need a road map, right?” she asked chamber members. “Where you are going. You need to know your projections for a year from now, three years from now, five years from now, and where will you be. And that can be liquid. You can change it. We had a company that started out as a janitorial company, and then five years later he said, ‘You know what? I want to do construction. So we went back to the plan and redeveloped it, so we could see where we could make the changes that lead to success.”

Relativo identified a full slate of products and services the SBA provides, and encouraged the business community in the chamber audience to explore them. She also stressed that small business was central to the US economy, and the administration’s prominent role in government reflected that idea.

“We are not down in some government department,” Relativo said. “We are one step below the top.”