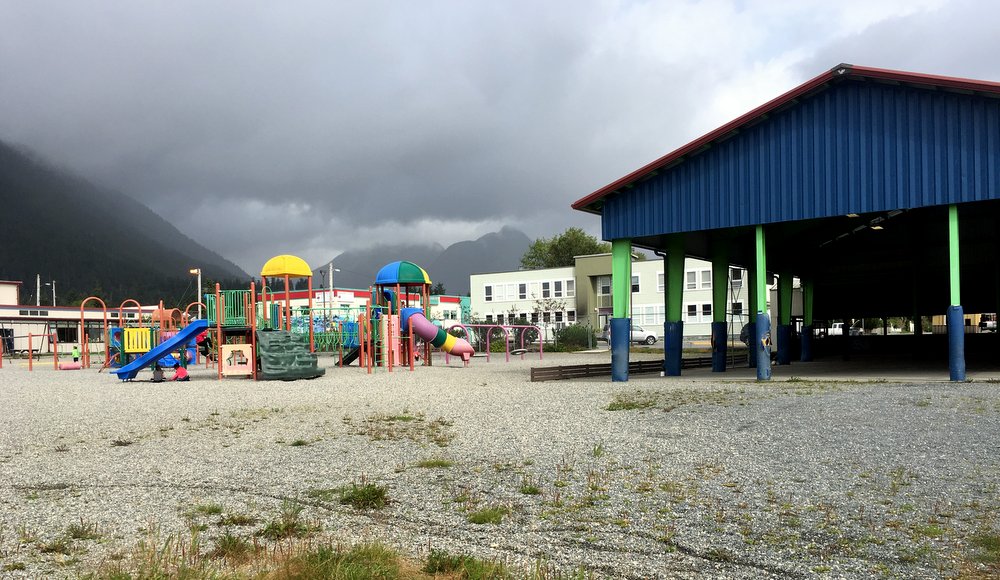 “The gravel is a problem,” one parent told the Sitka School Board on Wednesday. She was talking about the surface of the Baranof Elementary playground. The shelter pictured at right is the former maintenance building; the district is considering making similar modifications on the shelter at Keet Gooshi Heen — but only as a temporary measure. (KCAW photo/Robert Woolsey)

The Sitka School Board says it’s time for an update of the playgrounds at Baranof and Keet Gooshi Heen elementary schools — but any state help for the work could still be years away.

The board on Wednesday (8-29-18) approved moving the two playgrounds higher on the district’s capital priority list. Superintendent Mary Wegner agreed to the change, but she thought funding was unlikely due to a five-year state moratorium on capital projects in schools.

“Since this is still a year within the five-year moratorium, I’m not hopeful that we’re really going to get funding for projects,” Wegner told the board. “So it might give us some time to really look at the priority in future years.”

The school board approved advancing the elementary school playground upgrades to second and third on the capital priority list, on a 4-1 vote with Elias Erickson opposed.

The total cost for refurbishing the two playgrounds is estimated at $360,000.

The change bumps down proposed electric boiler installations in Baranof and Keet to fourth and fifth on the list. The total cost for those two projects is $700,000.

And the number-one item on the district’s list? Renovating the 30-year old covered PE structure at Keet Gooshi Heen. The total cost for that project is estimated at $521,000. As a stop-gap measure, district maintenance supervisor Mike Bartoloba (bar-toe-LOW-bah) suggested removing the deteriorating siding, and painting the superstructure — similar to work done on the old district maintenance building which was converted to playground space at Baranof Elementary.