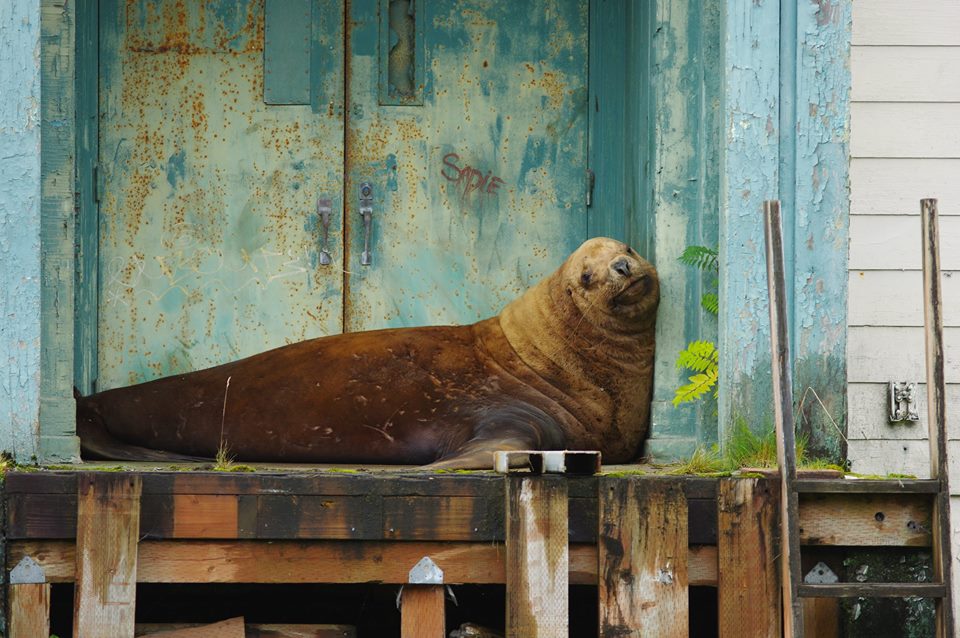 The adult male Steller sea lion hauled out of Sitka Sound early Friday morning. NOAA Fisheries biologists believe he became disoriented and could not find the ocean. The sea lion became a fixture over the weekend, attracting onlookers as it sought shelter near Mt. Edgecumbe Hospital and the surrounding woods. (Photo from Sitka Fire Department)

A team of marine mammal experts and law enforcement successfully returned a Steller sea lion to Sitka’s waters on Monday (09-03-18), after it spent the weekend wandering down roads and into woods. Biologists with NOAA Fisheries Service believe the adult male lost the ocean. They encouraged the sea lion’s return with tranquilizer darts and some patience.

Four days. That’s how long the Steller sea lion stayed put on Japonski Island, an area of Sitka that houses Mt. Edgecumbe Hospital. A night shift employee was the first to document the animal, lumbering down a watery roadway on Friday at two in the morning. The video quickly made the rounds. Law enforcement and marine mammal experts were on scene shortly after.

Sitkans warmed to the lost creature almost immediately, trying to account for his behavior. Comments to Friday’s KCAW story included, “Maybe he’s heading to the bar for a couple of shots?” “Maybe he’s looking for an emergency room?” The real story is more of a mystery, one that scientists are still trying to solve.

“Some of our marine mammal experts think it’s possible that he didn’t know where the ocean was. Where he was on land was not within sight of the ocean,” said Julie Speegle, a Juneau-based spokeswoman for NOAA Fisheries Service.

The sea lion showed no signs of injury. The animal is eight years old or older, weighing between 1500 and 1700 lbs. It’s normal for sea lions to haul out of the water to regulate their body temperature, but only for a few hours — not for days. Locals were perplexed too, taking videos of the animal sunbathing or hidden behind salmonberry bushes. 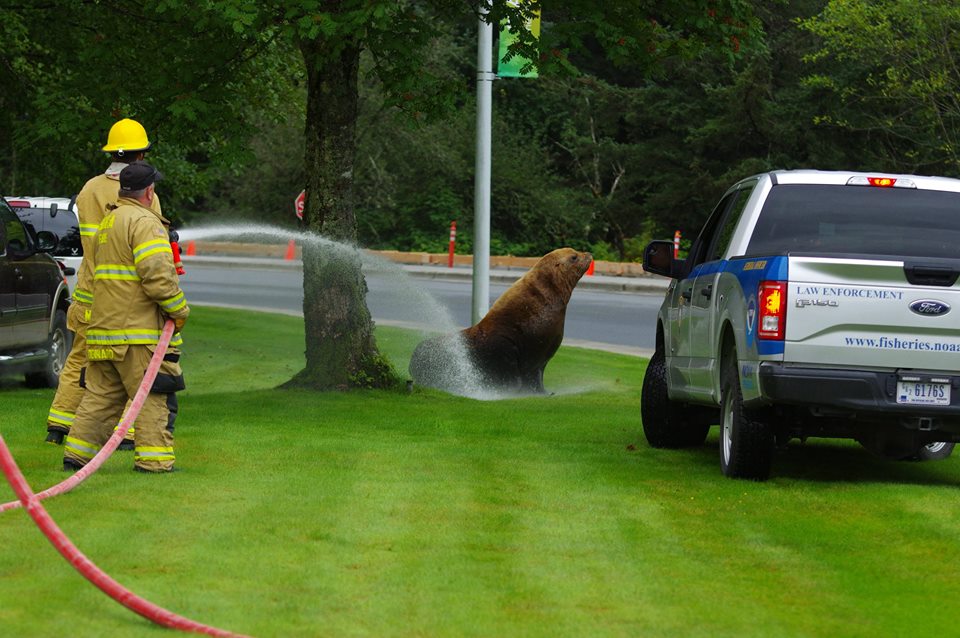 Sitka law enforcement attempted to relocate the sea lion with a fire hose on Saturday (09-02018). While the marine mammal made a start towards the water, he abruptly stopped at the road and entered the woods. (Photo courtesy of Sitka Fire Department)

Law enforcement attempted to coax the sea lion from hospital property on Saturday around noon. He was approximately a quarter mile from the water.  They sprayed the sea lion with a fire hose. He initially went in the right direction, propelling forward by pushing his flippers off the grassy lawn, but stopped the moment he got to Airport Road. “He veered off into the woods and then he would not budge,” Speegle said. The sea lion stayed in those woods for the next two days, visibly exhausted and hungry. He ventured a little, but never across the road. See KTUU’s video of the attempt here.

Video of the sea lion returning to Sitka Sound, recorded by Al Duncan

On Monday (09-03-18) around 1 p.m., marine mammal experts with NOAA and the Alaska Marine Mammal Stranding Network decided to sedate the sea lion and bring him home. Dr. Vickie Vosbrg from Pet’s Choice Veterinary Hospital helped administer tranquilizer darts and SEARHC loaned a front-loader, lifting the animal and driving him on a flatbed truck to the shoreline’s edge.

When the sea lion awoke, he entered the water after some hesitation . Responders on scene cheered. “He didn’t even look back and they watched him for awhile and saw him catch a fish. So that’s a good sign,” said Speegle.

Speegle also thanked the public for keeping a safe distance during the sea lion’s four day saga. NOAA hasn’t lost complete sight of him. They attached a satellite tag to track the sea lion’s movements and will look for clues about his health in the scat he left behind. 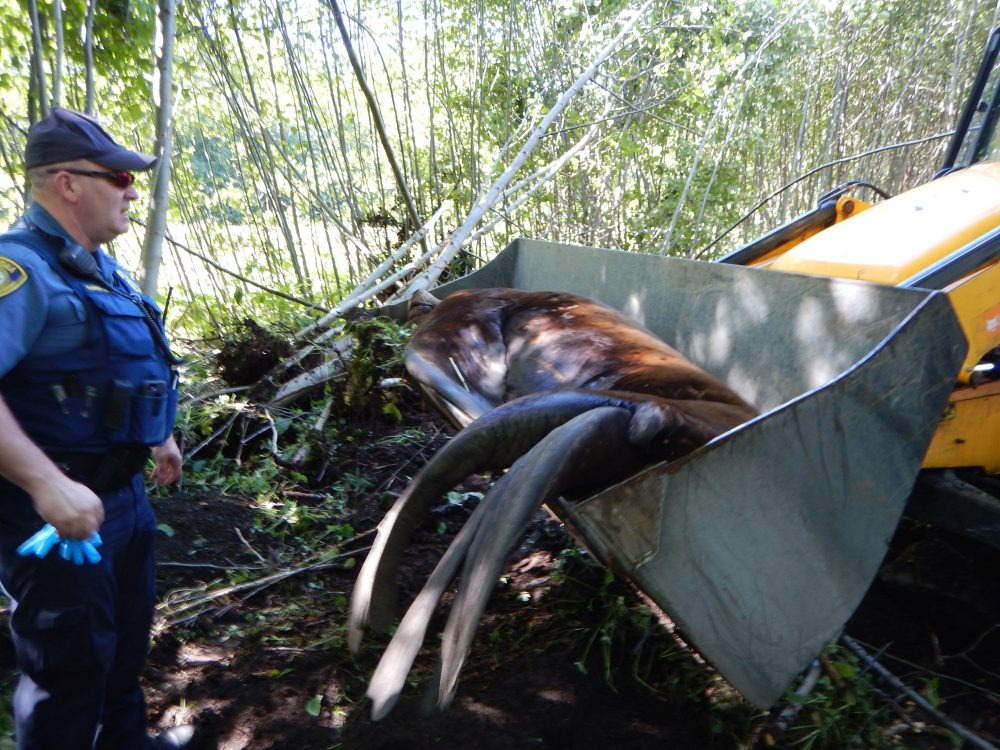 NOAA law enforcement lifts the sea lion, after he’s been sedated in a stand of alders, with a front loader donated by SEARHC. (Photo courtesy of NOAA)

Responders transfer the sea lion from a front loader to a truck bed. Video from Pet’s Veterinary Choice.