Kevin Mosher is one of five of candidates running for two seats on the Sitka Assembly. The municipal election is Tuesday, October 2nd. 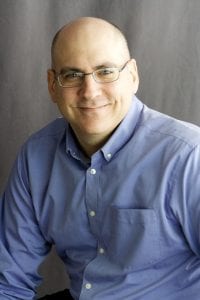 At 44, Kevin Mosher came to Sitka with the U.S. Coast Guard and has worked the past decade as an accountant. This is his first time running for the Sitka Assembly. (Photo courtesy of Kevin Mosher)

Hello, my name is Kevin Mosher and I’m running for City Assembly. I have lived here for approximately 25 years. I am married with five children. I originally came to Sitka in the United States Coast Guard. I was stationed on board the Cost Guard Cutter Woodrush. I’m originally from the east coast. I was born in Ohio and graduated from high school in New Jersey.

When I moved to Sitka, it was about six months of culture shock and then I absolutely fell in love with Sitka. I believe it is a very special and precious place — a hidden gem that a lot of people don’t know about.

I’ve been very busy the past several years. I was a stay-at-home dad for several years and then entered the workforce. I’ve been in accounting the past 10+ years, [working at ALPS Federal Credit Union, Sitka Community Hospital, and Shee Atiká Incorporated]. My kids are a little bit older now, so I feel like it’s time to give back and serve.

There’s a lot of things in this town we need help with and a lot of challenges. I don’t claim to have an answer for everything. I claim to have an ability to look at the big picture. Unfortunately, I think some decisions that have been made are a little narrow-minded. I’m not trying to speak negatively of the Assembly. I know they’re trying very hard to do what’s best. That needs to be said. Everyone is doing what they feel is best.

I’d also like to engage the community. I am new to this. I’ve only been active in the city for the past five months or so, since I’ve decided to run. I’ve been doing everything I can by going to meetings – as many as I can – and learning as much as I can. I honestly had no idea how much there was to learn. I’m learning more every single day.

I believe it’s important to respect all views. There’s no way every single person is going to agree. But I think we can meet with people in the community, get a consensus on the heart of what people want. and make a decision based on that. I feel like everyone should have a voice.

I have a Facebook page, Kevin Mosher for Assembly. That has my contact e-mail, so you can e-mail me any questions directly. I’d be happy to meet with people one-on-one. I tend to shy away from Facebook comments and having discussions that way. I prefer to meet with people face-to-face and discuss things. I’d be more than willing to that.

I appreciate your support. I’m Kevin Mosher. Thanks for listening.

See our reporting on Mosher filing for the Sitka Assembly here.