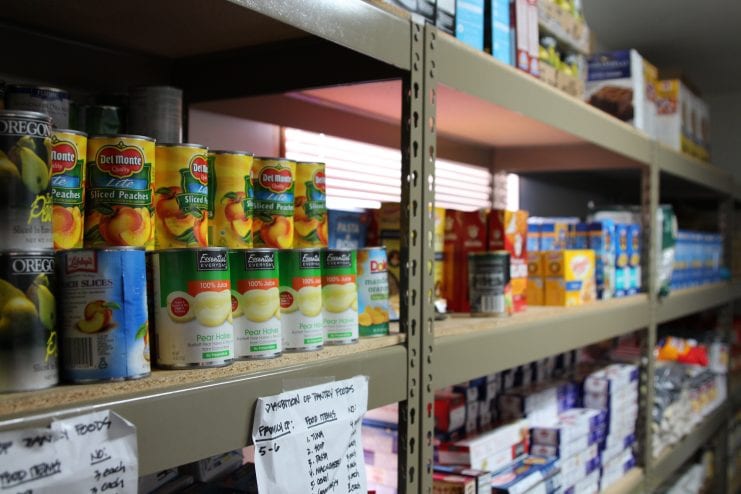 The Sitka Salvation Army cycles through 10,000 lbs. of food a month. Most of their stock is donated by local grocery stores. In the past year, attendance at the soup kitchen has nearly doubled. Some trace this to locals unable to renew their food stamps after the closure of Sitka’s public assistance office. (Emily Kwong/KCAW photo)

Earlier this year, the state re-opened Sitka’s public assistance office — to the relief of many. When the office was closed, the welfare caseload became severely backlogged. Locals who rely on benefits were not able to quickly renew, pushing many over the edge. Sitka’s pantries were put to the test.

(Sound of curtain being pulled back)

Blossom Twitchell pulled back a curtain, revealing Sitka Tribe of Alaska’s pantry. “We have crackers and rice and noodles and chili,” she noted. Twitchell is a case worker for the social services department. The pantry is open to all tribal citizens regardless of income.

At the start of the month, staff go grocery shopping and stock the pantry with staple goods. Three weeks into August, when this interview was recorded, the shelves were mostly bare. “A lot of people are using their food money to pay utilities and rent and cost of living expenses. We are seeing a spike in our [pantry use] numbers,” Twitchell said.

Food insecurity in Sitka has deepened and also broadened. Jean Swanson, an outreach family caseworker, said she’s seen tribal citizens come into her office seeking help that never did before. “We were seeing families that usually are self-sufficient coming in. We were seeing them for the first time,” Swanson said. As a result, what used to last a month at STA’s pantry now lasts a week and half. Why? 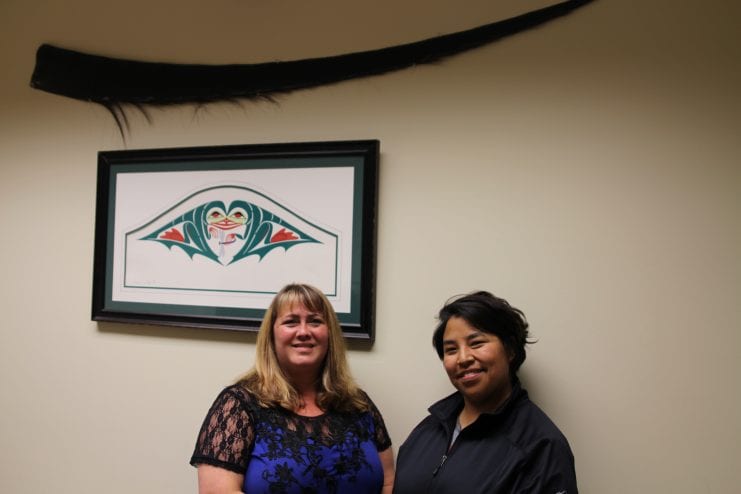 Jean Swanson and Blossom Twitchell work for Sitka Tribe of Alaska’s social services department. They budget for a pantry, cycling through 400 lbs. of food a month. The pantry is open to all tribal citizens. (Emily Kwong/KCAW photo)

Both Swanson and Twitchell trace the upswing in pantry use this past year to the closure of Sitka’s public assistance office in June 2017.  The district office, operated by the state Division of Public Assistance, is where locals could walk in the door, apply for food stamps, Medicaid, and other benefits, and have a technician on hand to help navigate the system.

The closure was the result of attrition. It made financial sense to the state in an era of budget cuts. The Juneau office took over Sitka’s case load and did what it could to keep up with demand, but eventually, the backlog grew and grew…and grew. Individuals were unable to renew their food stamps, formally known as SNAP benefits (Supplemental Nutrition Assistance Program). Without them, more Sitkans were going hungry. Approximately 10% of Sitka’s population uses food stamps.

“A lot people would call the Juneau office and they would get a machine,” Twitchell said. “When you’re in that moment of needing assistance and needing answers to what they needed to do to get back on, they weren’t finding the answers.”

Susan Briles SEARHC and others began to submit complaints to the state ombudsman, as did other communities in Alaska experiencing their own delays. Twitchell and Briles even brought the issue before Sitka’s Health and Human Services commission.

In 2018, the state ombudsman investigated the Division of Public Assistance and found a backlog of  20,000 applications. Their report was released in May of this year. You can read it here. And in June, to the relief of many, the state re-opened Sitka’s office. 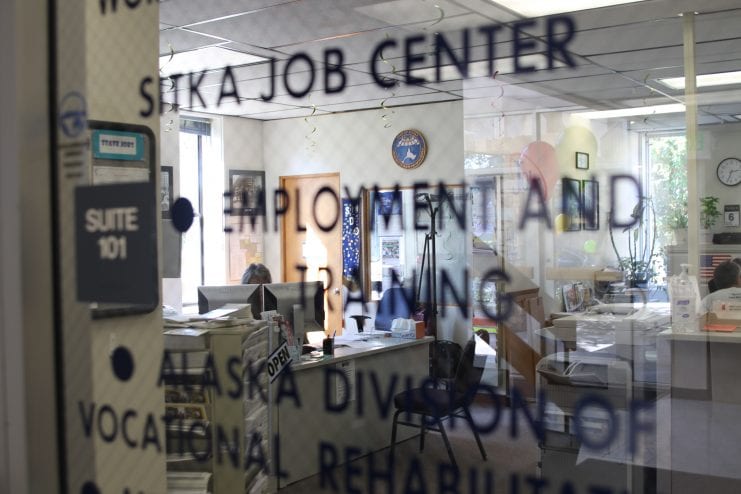 The state has re-hired an eligibility technician and office assistant for Sitka’s public assistance office. Once located at 201 Katlian Street, the office is now on the ground floor of 304 Lake street. (Emily Kwong/KCAW photo)

I visited the office, housed in the same building as Sitka’s trial court. Applications are still processed elsewhere – this time in Ketchikan – but the two local positions have been re-hired.

Southeast Regional Manager Victoria O’Brien says it will take awhile to train the new staff and get caught up on Sitka’s case backlog. “As of right now, we’re doing what we can with what we have and working as much as we can, encouraging our staff to work as quickly as possible as accurately as possible and to get as much done as they can in a day,” O’Brien said.

There have been other positive changes since the ombudsman’s report. The legislature approved funding for 20 new public assistance positions and the department is working on a statewide delivery model that would allow technicians to process applications from anywhere in the state.

Twitchell is relieved. “It’s not such a bottleneck now, but it definitely hit Sitka hard. It hit families hard. It hit elders especially hard,” she said.

STA wasn’t the only pantry cleaned out. Sitkans Against Family Violence has seen their stock dwindle. Salvation Army is feeling the pressure too. They are the biggest pantry in Sitka, cycling through 10,000 lbs. of food a month. About three quarters of local donations come from Sitka’s groceries stores. The rest is supplied through the U.S. Commodity Supplemental Food Program. But, it’s not enough to meet the need in Sitka. 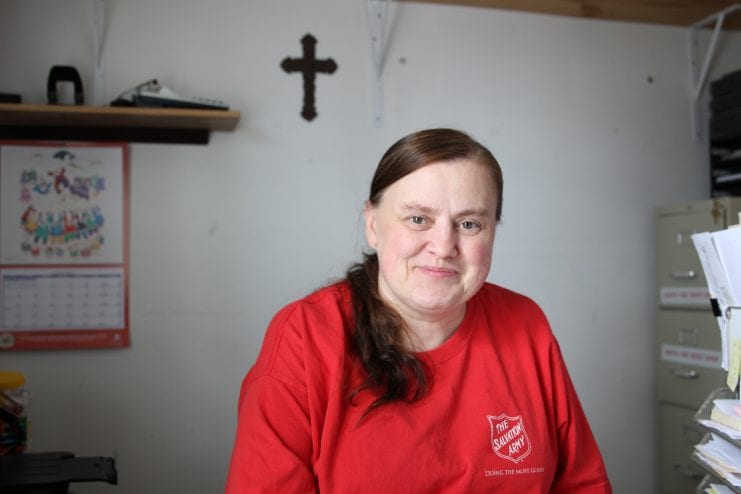 Major Charleen Morrow administers the Sitka Salvation Army with her husband, Major Matthew Morrow. They took over the post in June and previously ran the Salvation Army in Sheridan, Wyoming. (Emily Kwong/KCAW photo)

Major Charleen Morrow moves through the dining area and greets the clientele, as steam rises from bowls on the table. It’s lunch time. She and her husband Matthew took over the job in June. In the past year, they’ve seen clientele at the soup kitchen nearly double, from 25-30 meals a day to 50 meals a day.

Donations for the pantry are not enough, so the Salvation Army spends $600 a week on groceries to keep the shelves full. Frozen meat is one of the first things to go. “Meat is so expensive and lots of families go without,” Morrow said. “They’ll use canned meat, like chicken or tuna in place of meet, so when we get the meat in, we’re really excited to give that out.”

Morrow echoes what Sitka Tribe is experiencing: that clients aren’t just homeless individuals, but families and senior citizens. She worries about the physical toll food insecurity can take.

Morrow: We hear stories about people worrying themselves into the hospital. Like, “I was so worried about paying this bill, I got an ulcer and ended up going to the hospital.”

KCAW: Is it hard for those families to come to Salvation Army for the first time?

Morrow: Oh, absolutely. We have a lot of people that come in tears because they are embarrassed or ashamed. As a person that grew up with a single mom that relied upon food boxes, I know that embarrassment and shame is there. But we try to make it so that it’s not embarrassing or shameful.

Like Sitka Tribe, Salvation Army does not verify the income of a person seeking help. Their mission is built around the idea that anyone can fall on hard times and that times right now are especially challenging. “We don’t consider it a hand out,” Morrow said. “We consider it a hand-up.”

Vicki O’Brien serves on the CoastAlaska board. The Salvation Army kitchen offers free lunch Monday through Friday at 11:30 a.m. Doors open at 10:30 a.m. The food pantry is open Tuesday through Friday from 10:30 a.m. to 2 p.m.  To round out our week of food reporting on “The Cost of Living in Sitka,” our next story is about the rocky road of food prices and the case of the missing eggs. 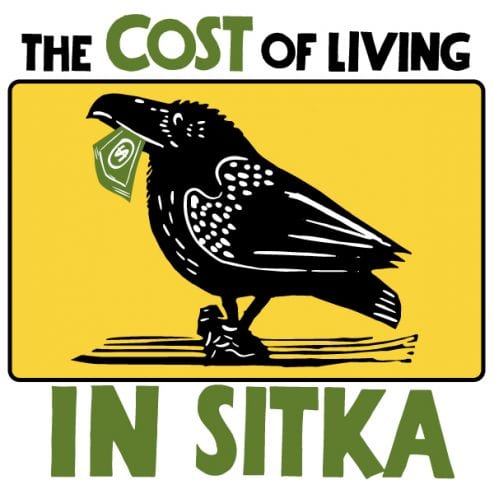