One down at Chamber, school board candidates meet next on air Thursday 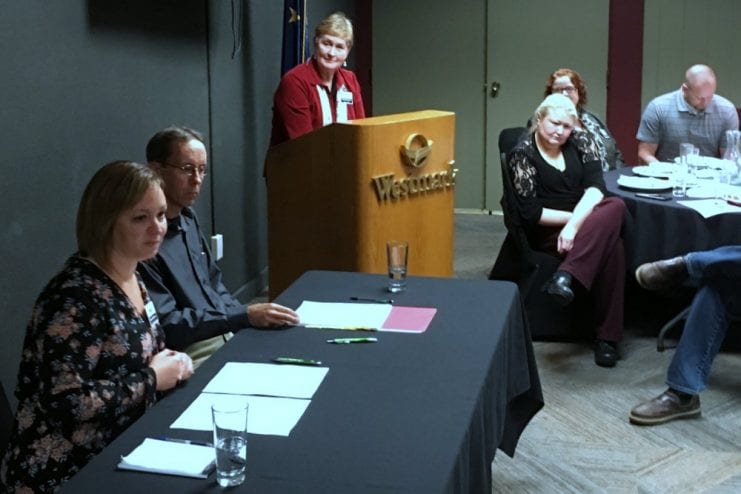 School Board candidates Amy Morrison (l.) and Eric Van Cise take questions from the Chamber of Commerce, under the eye of moderator Sheila Finkenbinder. A third candidate, Cass Pook, was out of town on work travel. Her responses were read by Pat Alexander. (KCAW photo/Robert Woolsey)

Two of Sitka’s three school board candidates met in their first public forum of the election season, during the Chamber of Commerce luncheon this week (9-12-18).

All three are scheduled to next appear 6:30 – 8 p.m. Thursday, September 13 on Raven Radio in a live listener call-in.

Both candidates were aligned in their views on providing kids with as broad an education as possible, but the district the last two years has been forced to make program cuts — to high school drama and the Blatchley Library, for example — and more may be on the way.

Asked about this, Eric Van Cise said any future cuts would be a community decision.

“As a board member, I would want very dedicated and serious outreach to our staff, our parents, and our community,” he said. “When that decision has to be made, it’s not a fun decision. But I can rest easier knowing that it’s something that our community looked at and came to the best conclusion.”

Chamber moderator Sheila Finkenbinder asked the candidates if there were any new tools available to keep kids in school and arrest the dropout rate.

Political newcomer Amy Morrison agreed with Van Cise that giving teachers freedom to think out of the box was important.

“Every kid is going to have their own passion,” said Morrison. “And I think it’s about finding out what they’re passionate about, and having the school district and the schools respond to that in some way.”

The third school board candidate, 18-year incumbent Cass Pook was traveling out of town during the forum. All three candidates are scheduled to appear 6:30 p.m. Thursday, September 13, in a live election call-in on Raven Radio. Your calls and emails will be welcome.