Murkowski urges collaboration in new ‘roadless’ policy for the Tongass 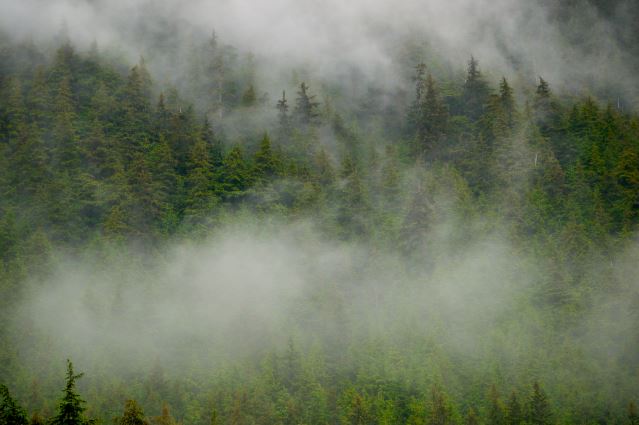 Opening unroaded areas of the Tongass to road development — and to logging — has been contentious since roadless policy was established in 2001. (Flickr photo/Joseph)

Ever since the state filed a petition in January of this year for a roadless exemption, opponents have argued that the move reopens a debate that was finally closed in 2016.

The Roadless Rule has been controversial for nearly two decades, at the highest levels of government.

Note: The US Forest Service will share information and take public input on Alaska’s petition to lift the roadless rule in the Tongass, 5:30 – 8 p.m. Monday, September 24, in the Aspen Suites hotel in Sitka.

The Tongass Land Management Plan underwent an extensive overhaul in 2016, and pivoted toward a multiple-use strategy that would rely progressively less on the harvest of old-growth trees, and more on second growth.

US Sen. Lisa Murkowski was never a fan of the updated Tongass plan, and she is fully behind the new agreement between the state and the Forest Service to come up with a roadless rule exemption that is specific to Alaska.

But “roadless exemption” is a hot-button term. In remarks to Sitka media during the congressional recess this summer, Murkowski made it clear that she is aiming for something different.

“It’s not a Roadless exemption,” said Murkowski. “That is something that the (Alaska’s congressional) delegation had asked for, and that the governor had asked for. I had a long sit-down with the secretary (US Agriculture Secretary Sonny Perdue) and he said, ‘Look, if I were governor I would ask for an exemption too. But I’m trying to be pragmatic here, and seeing that going forward,’ he said, ‘you know we can either set ourselves up for litigation for a long time and hope we win on it, or we can try a more collaborative strategy.’”

Sen. Murkowski favors the state-specific approach to roadless, since — in her words — “It won’t be bunch of people from Washington DC air-dropping in.” A task force of Alaska stakeholders will design the plan, for both the Tongass and Chugach forests.

Note: Alaska Sen. Lisa Murkowski has been a determined opponent of the “Roadless Rule” in Alaska. She’s recently signed two letters urging an exemption for the state. One to Representative James Costa, the other to the Senate Committee on Agriculture, Nutrition, and Forestry.

But that’s exactly what the conservation community believes happened during the 2016 overhaul of the Tongass Land Management Plan. It was a stakeholder-based process that looked at the forest as more than just a place to grow trees.

Southeast Alaska Conservation Council attorney Buck Lindekugel thinks Sen. Murkowski is out of touch with what’s happening on the ground.

“The timber industry makes up less than one-percent of all the jobs and wages in Southeast Alaska,” said Lindekugel. “Why are we perpetuating controversy that isn’t there in order for them to get more subsidized logging? It just doesn’t make sense.”

Following the close of the public comment period on October 15, the Forest Service will begin a complete environmental review as part of the public rulemaking process. It will be fraught with political and legal hazards: The Roadless Rule first went into effect on January 12, 2001, just 8 days before President Bill Clinton left office. The state of Alaska immediately filed a complaint, and won a temporary exemption from the rule in 2003. In 2011 a federal court set aside Alaska’s temporary exemption, and the Tongass and the Chugach were under the Roadless Rule again. After yet one more brief reversal by a three-judge panel of the 9th Circuit Court of Appeals, the full court voted in 2015 voted 6-5 denying Alaska’s complaint, and the state has been under Roadless ever since.