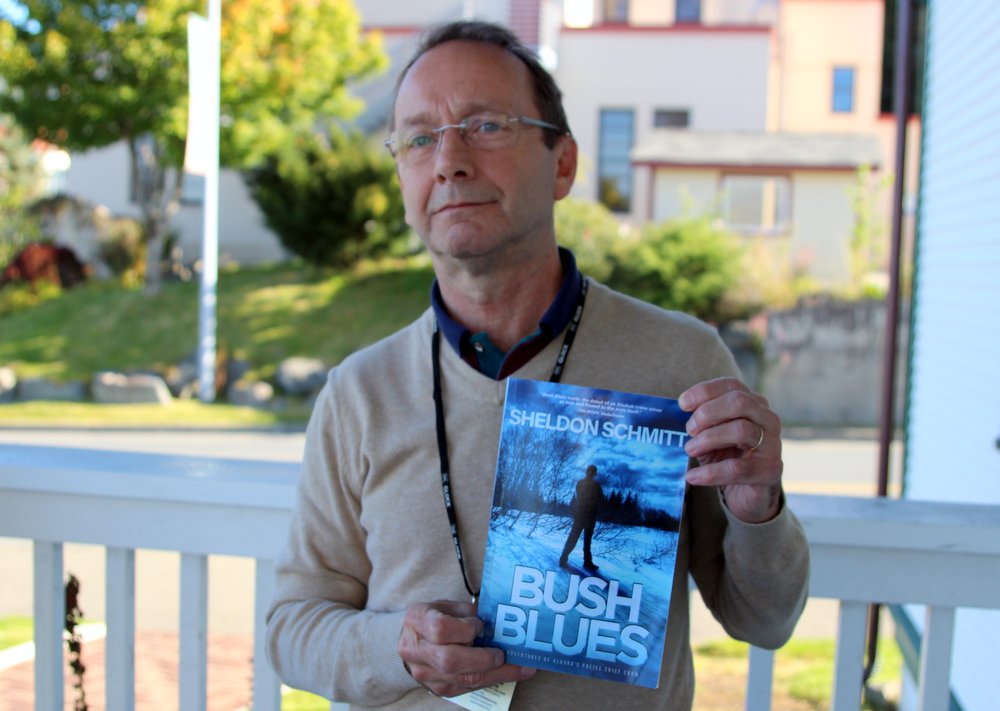 A new crime thriller based in western Alaska was penned by a newcomer to fiction, but a veteran in law enforcement.

The story explores the life of a regular-guy cop doing police work in some extraordinary circumstances.

Sheldon Schmitt was Sitka’s police chief for 12 years, from 2005 to 2017, and it’s lieutenant for two years prior to that.

But he was no newbie to Alaska. Prior to becoming a police officer in 1995 he spent ten years fishing in Bristol Bay. He says he was a bit of a bar rat, and maybe the kind of guy local police kept an eye on.

But he knew that there were stories in Western Alaska. His trips back into more urban areas proved that.

“Whenever I would come back in and talk to people they were always kind of fascinated,” said Schmitt. “I’d tell stories of what it was like to live out there. People wanted to hear about it. So I thought, You know, I should write some of this down. It interests me, and it changed my life living out there.”

His novel is called Bush Blues. It introduces us to police chief Brady Snow, based in Togiak, Alaska. Togiak is a long way from Sitka — and not just geographically. The story taps deeply into the indigenous culture of the region, the fishing and subsistence economies. The fierce pride of the people who have carved out a life under difficult living conditions.

Somehow, Brady Snow manages to make his way in this world, too, just like the author who created him.

KCAW – Everyone who picks up this book is going to wonder how much of Sheldon Schmitt is in the DNA of Brady Snow. How much of this stuff actually happened to you?
Schmitt – Most of the things in the book are real life, real things that happened. It might have happened somewhere else up north, or an event that happened someplace else that I put into Togiak, or a person whom I’ve described as a real person, but now is in a different setting. The book itself is based on real life.

Schmitt’s first job as a police officer was in Togiak in 1995. He was promoted to chief after only 6 months. He subsequently spent five years at Point Hope and Barrow, and did a brief stint on the (Kenai) Peninsula.

Brady Snow in some respects is an outsider in Togiak, but he knows the rules, and plays by them. He is the most patient cop in fiction you’re likely to meet.

“I specifically didn’t want him to be a heroic figure,” Schmitt said. “I wanted him to be a regular guy — not a Jack Reacher who has all these special skills. But a regular guy. And I’m hoping that came through in the book.”

“When you’re out in a small town, the person that you arrest today is filling up your fuel tank — or your water tank — tomorrow. There’s no anonymity out in the bush, out in the village. Everybody knows where you live, and how you treat people makes all the difference in the world.”

The fictional state troopers in Bush Blues are concerned that Brady Snow’s calm demeanor means he’s gone soft, and has become too enmeshed in the community. Snow’s brain is always processing though, whether it’s his calm investigation of possible suspects, or trying to score a date with a nurse.

Snow understands that some things can’t be rushed.

“I never was a police officer or a police chief in a large city,” Schmitt explains. “All I really know is rural policing. Sitka’s the biggest town I’ve ever worked in. So I’m talking about stuff I know about, and it is different. You’re oftentimes by yourself and the way you treat people makes a big difference. When you’re out in a small town, the person that you arrest today is filling up your fuel tank — or your water tank — tomorrow. There’s no anonymity out in the bush, out in the village. Everybody knows where you live, and how you treat people makes all the difference in the world.”

Sheldon Schmitt consulted Sitka’s other crime novelist, John Straley, about the story, and even gave him a draft to read. Straley liked it, and gave him a blurb: “Schmitt has put his thirty years of law enforcement experience and his big heart for the people he served to good use in this novel. Bush Blues is a terrific read.”

And for Schmitt, there was never a moment’s doubt that he would write a story, rather than another of Alaska’s many non-fiction true-life adventure tales — even though Bush Blues is all of that.

“I just wanted to write a novel, from the get-go,” said Schmitt.

Bush Blues is published by Köehler books, and available in many bookstores and online.