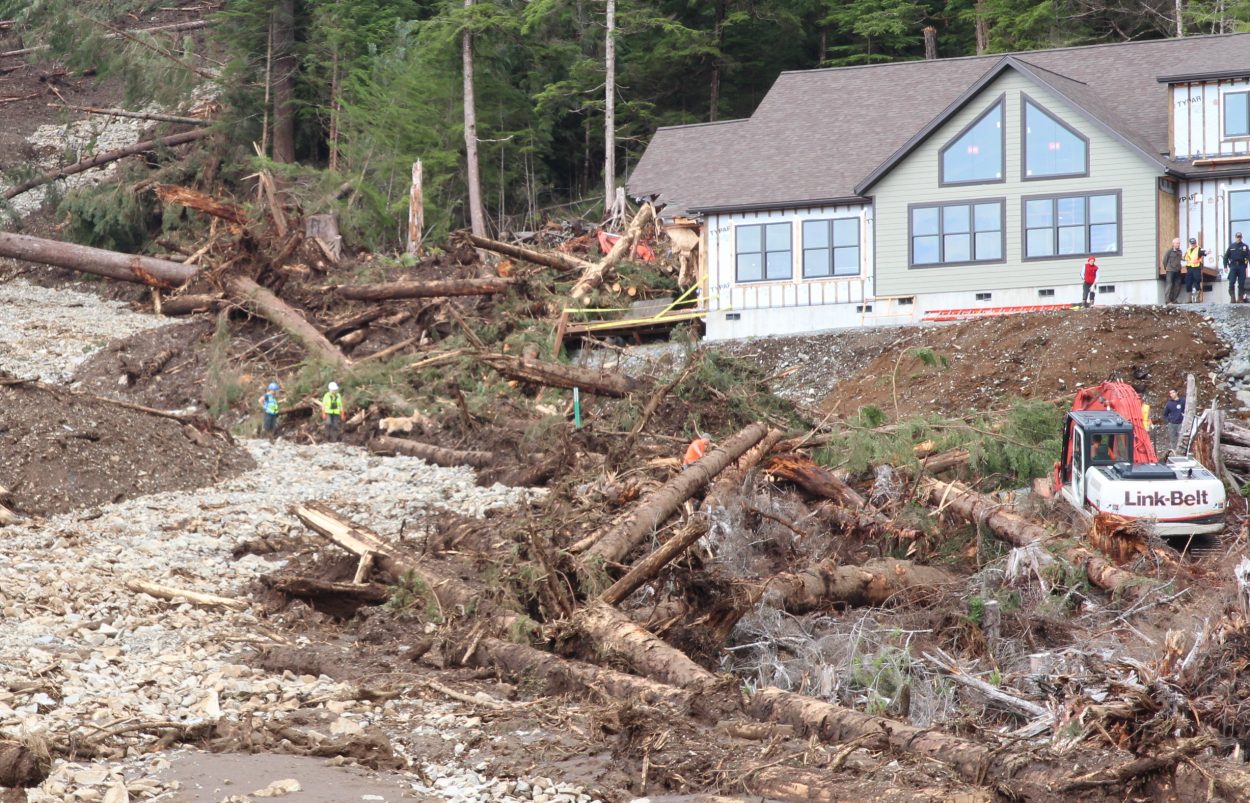 The Kramer Avenue landslide on August 18, 2015, claimed three lives in Sitka, and left the rest of the community permanently on edge — especially during heavy rain events. “We can’t totally tame the chaos,” says the RAND Corporation’s Rob Lempert, “but our goal is to make significant strides” toward a networked landslide warning system. (KCAW file photo)

A research partnership has been awarded $2.1 million to study landslide prediction in Sitka.

The 3-year “Smart and Connected Communities” grant comes from the National Science Foundation, with the goal of using relatively inexpensive sensor technology — and existing social networks — to create a realtime warning system in Sitka and other communities at risk of slides.

It’s been just over three years since Sitka was struck by a cluster of three landslides — two of which were relatively harmless, and the third fatal.

Margie Esquiro’s house is just below where the deadly Kramer Avenue slide turned, and eventually came to a stop.

She reflected on the events of August 18, 2015, during a first anniversary commemoration of the slide.

There was a knock on the door and someone yelling, “Mrs. Esquiro, you have to leave!” So I quickly threw some clothes on and tried to call (my husband) Pete, but I couldn’t. And I jumped in the car and went down to where he was. And as I was leaving there were police in the neighborhood. They were next door. I took nothing, and left for a week.

Many people in Sitka remain on edge during heavy rains. One of the town’s elementary schools was identified in geotechnical mapping undertaken after August 18 as being in an area of “moderate” risk for landslides.

“One of the motivations of the project is to ease nerves a little bit by providing a better sense of what the risks are,” said Rob Lempert, a risk analyst with the RAND Corporation, a nonprofit based in Santa Monica, California. His background is in physics and political science. Boiled down, his work now involves understanding how communities make good decisions in the face of uncertainty.

As a co-principal investigator for the grant, he’ll be pulling together a team from RAND, the Sitka Sound Science Center, the US Forest Service, the Sitka Tribe of Alaska, and other partners to approach the problem of landslide risk from a couple of different perspectives. The first is straight up geoscience.

“Using very low-cost networked sensors, which we’re going to deploy in the hillsides so we’ll have a much better indication of soil moisture, and therefore let us do a better job of landslide prediction,” said Lempert. “And then use new image classification technologies to get a better idea of the base landslide risk in the area.”

“One of the things we heard during community meetings: Maybe we don’t want to know, because we have all these other ideas of what that could bring. Does it bring more expensive insurance or home prices? I think that’s one of the things we’ll want to explore from the social science side: What is people’s appetite to fully understand the risks?” — RAND analyst Katie Whipkey

Lempert says the team will incorporate information from a Forest Service database of historic landslides, and an alpine weather station, into the risk model.

And then there’s a social science component. Lempert says landslide prediction will always be imperfect. Part of the work under the grant is to determine what type of warning will best communicate risk to Sitkans, but not numb them with false alarms.

“Where do people want the balance between too little warning and too much,” said Lempert. “And then trying to understand the social networks in Sitka, to better understand how warning can most effectively be relayed.”

Lempert has already been to Sitka. He and a RAND colleague, policy analyst Katie Whipkey, traveled here under a planning grant in 2017 to speak to community leaders and potential partners, and to refine the full proposal.

Prior to her work with RAND, Whipkey served as an Americorps volunteer at Mt. Edgecumbe High School. She understands Sitka, and the layers of complexity in moving forward with this research.

“One of the things that makes this interesting is that from the planning grant, and having the community meetings that we were having,” said Whipkey, “is that we heard from a lot of people: Maybe we don’t want to know, because we have all these other ideas of what that could bring. Does it bring more expensive insurance or home prices? I think that’s one of the things we’ll want to explore from the social science side: What is people’s appetite to fully understand the risks?”

That is the $2.1 million dollar question. In clear weather, Sitkans look out across a sparkling bay to a dormant volcano. The mountains that form the town’s majestic backdrop, are frequently the source of tragedy.

In that same interview on the anniversary of the 2015 landslides, Margie Esquiro’s husband, Pete, said plainly what many Sitkans already understand.

You know when you live between the mountains and the ocean, you always run the risk of, if the ocean doesn’t get you, there’s a possibility the mountains might get you. We all live in a risk situation.

And in truth, no amount of money or research can really reduce that risk. At best, said Rob Lempert, “We may not totally tame the chaos, but our goal is to make significant strides.”

The official start date of the three-year landslide prediction project in Sitka was October 1.

This story was updated on 10-4-18 to more accurately locate the headquarters of the RAND Corporation in Santa Monica, California, rather than in Pittsburgh.

This story was amended on 10-23-18 to include the Sitka Tribe of Alaska among the research partners.