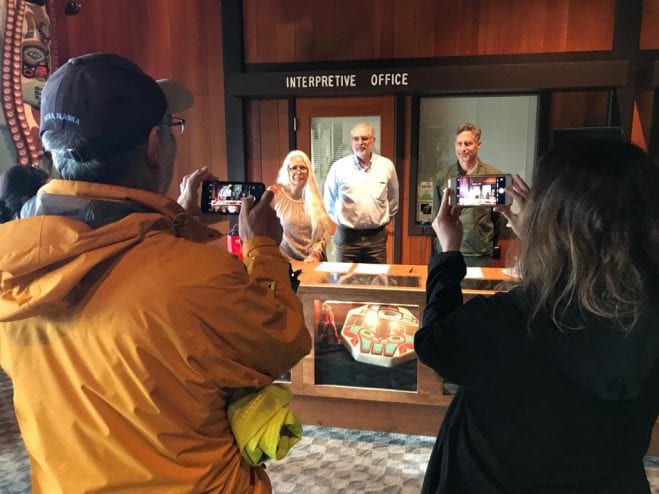 Representatives of the Sitka Tribe of Alaska and the National Park Service renewed a funding agreement Friday that allows the tribe to co-manage the park. This, after a somber ceremony mourning the Kiks.ádi warriors who fought at the Fort of the Young Saplings. (Photo by Enrique Pérez de la Rosa, KCAW)

The Tlingit people have called Southeast Alaska home for thousands of years. And it wasn’t until the arrival of the first Russian settlers that their territory was taken by force.

Now, the Sitka Tribe of Alaska is back in charge of a small, but historic portion of their ancestral lands. Sitka Tribe has renewed an agreement to manage the interpretation program at Sitka National Historical Park.

During  the Battle of Sitka in 1804, the Kiks.ádi fought for the land where the city now sits. Two years before, they had ousted Russian colonists who had settled in what is now Old Sitka. Now, the Russians had come back in full force to take back their claims. But the Kiks.ádi were prepared and built a fort that impeded the Russian advance for four days.

But the Kiks.ádi lost their gunpowder supply in an explosion while transporting it to the Fort of the Young Saplings, located at what is now the tip of Sitka National Historical Park. They were forced to retreat and cede this land to the Russians. The Kiks.ádi left behind their homes and possessions, including their clan regalia, to withdraw from the fort.

Louise Brady says much more than that was lost in the battle. We’re walking into the wooded park toward an empty field where the fort once stood. A lone totem pole marks the site.

“My ancestors’ blood is on this land,” she said. “And that’s how much we value being Kiks.ádi and being from this land, being a part of this land, this place. So, we can remember all of the people who died and all the people who fought for us to continue to be who we are as Tlingit people.”

Brady is the operations lead for the Sitka National Historical Park. Last Friday, she organized a mourning ceremony to remember her Kiks.ádi ancestors that fought and died for this land.

She says the fight that took place in Totem Park still has relevance to modern-day Tlingit people. It’s just one of the many battles that have taken place since Russian colonialism and American governance. For her, the Battle of Sitka is a story of strength and resilience for native peoples fighting those battles today.

“Sometimes I get tired and when I do I come out here and I remember my grandmothers that fought alongside my grandfathers and I think, ‘you know what, I haven’t had to pick up a gun,” Brady said. “All I’ve had to do is say some words in front of some hostile people.”

People attending the ceremony gathered at the base of the totem pole that now sits where the fort once stood. When the ceremony began, the air around the crowd turned somber. At times, the only audible noise was the seagulls at the mouth of the Indian River in the distance.

Their cacophony seems to cease once Kiks.ádi members began to sing sorrowing songs to remember the Battle of Sitka.

While the battle took place over 200 years ago, Lisa Gassman says the feelings of loss are still very present to Tlingit people today.

“When they started singing the songs – and I’m going to get emotional here now – it just shows the tie that we still have to this land,” Gassman said. “It shows why we won’t go away. It’s important that people to understand that tie cannot be broken and it won’t.” 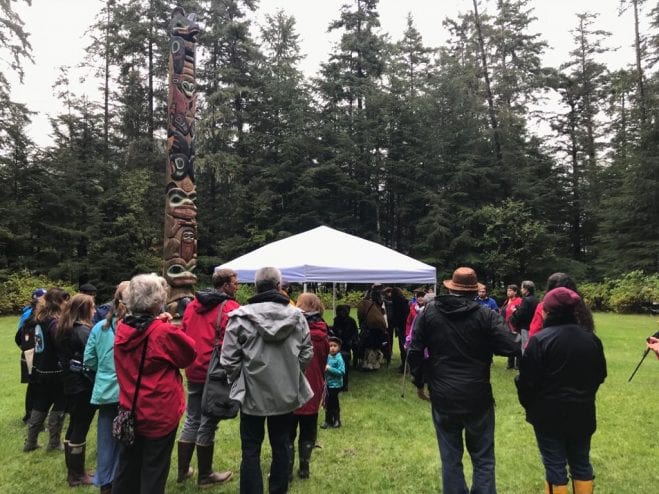 Attendees to the mourning ceremony gather where the Fort of the Young Saplings once stood. (Photo by Enrique Pérez de la Rosa, KCAW)

Gassman is the General Manager of Sitka Tribe of Alaska. She said the tribe is taking on more responsibilities in the management of Sitka National Historic Park. In 2018, they signed an agreement with the National Park Service to manage interpretation programs. After the mourning ceremony, they renewed that agreement for the first quarter of 2019 with a plan to expand their role.

“We’re excited to be back on our land and working with the Kiks.ádi people, the clans that were here at that time and remembering that history but also looking forward,” Gassman said.

In 1994, the federal Indian Self-Determination and Education Assistance Act was amended to let tribal governments pursue funding agreements for projects and programs on lands culturally connected to the tribe.

Sitka Tribe is not the first to enter a funding agreement, but they are the first to manage history education programs and interpretative talks at a national park.

Bert Frost is the regional director of the Park Service’s Alaska office. He said the members of Sitka Tribe of Alaska are much better prepared to tell the story of what happened at the park in 1804.

“Having members of the Sitka Tribe do it, they can bring a level of detail and passion and understanding that park rangers don’t have,” Frost said. “Having that personal connection is really a special thing for when visitors come and come to see what happened here and try to understand the significance of the site.”

“For whatever reason, I think there’s a lot of misunderstanding and miscommunication that, you know, probably started from day one of contact,” Brady said. “It serves people well to come and witness this and to really get a better understanding of how closely we’re connected to this land.”

Brady says Tlingit people have become more welcoming to non-natives in recent years and are more willing to talk about their experiences as indigenous people. All we need to do is listen.