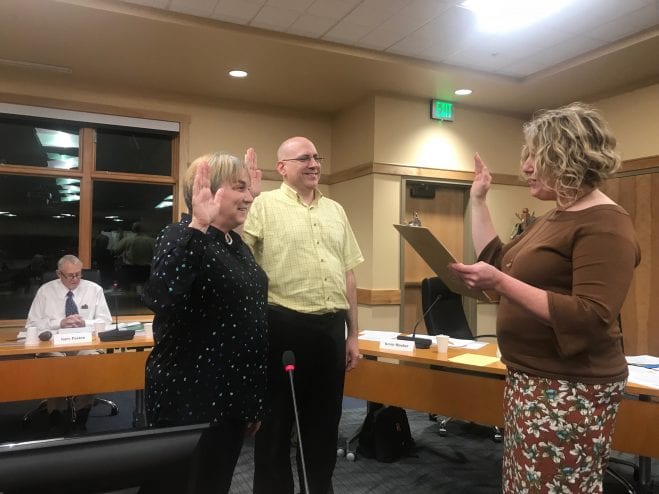 Before stepping away from the bench, each departing Assembly member took a turn at the microphone.

Ben Miyasato praised those who ran and those who voted, saying it isn’t easy to run nor easy to lose. Miyasato lost to Paxton in his bid for Mayor, and said he would run again if asked by citizens in the future. He was nominated to a one-year term in 2017 and previously a three-year term in 2013. The career military veteran offered parting ideas to the incoming Assembly, such as the establishment of a commission to prioritize public work projects.

“To have that commission created would be good for our city and for what needs to be done and for our infrastructure,” Miyasato said. “Also, we need to have a freeze on our taxes and utility rate increases. We don’t want to chase everyone away. We love this community and want you stay here.”

Elected in 2015, outgoing Assembly member Bob Potrzuski served a three-year term after a long career in the Sitka School District. He thanked the community of Sitka and looking around the table, his fellow Assembly members — four of whom are former students.

“I never predicted that I’d have an opportunity to share a whole different experience with these fine men…[any more] than I did with the really fine young men that I did in high school. Thank you gentlemen for being up here with me. It was pretty cool,” Potrzuski said. Those four students are Matthew Hunter, Steven Eisenbeisz, Kevin Knox, and Aaron Bean. City clerk Sara Peterson was also in Potrzuski’s class in high school.

Deputy Mayor Eisenbeisz presented each outgoing Assembly member a certificate and to Hunter, a special gift. “The city has gotten you a gavel, so that you may continue gaveling,” Eisenbeisz said, holding a wooden box with the gavel resting inside. “Serving as a lieutenant with the EMS division in the fire department is a time consuming enough job, let alone being Mayor. So while I’m sure it’s bittersweet, enjoy your Tuesdays,” he added.

Taking the microphone for the last time, Mt. Edgecumbe teacher and outgoing Mayor Matthew Hunter momentarily lost, then found his words while quoting former city administrator Mark Gorman. He elected to the Assembly in 2012 and as Mayor in 2016.

“A few years ago, Mark Gorman said something that I found quite profound. (Pauses) I do have some emotions down in there pretty deep. (Laughs) What I was going to share was his comments about how beautiful it is…to live…in a democracy,” Hunter said, holding back emotion. The crowd applauded. Hunter thanked them.

The Assembly then certified the results of the election, took a quick break to eat cake, and when they reconvened, Gary Paxton was sworn in as Sitka’s Mayor and Valorie Nelson and Kevin Mosher were sworn in to the Sitka Assembly..

The past year has been a turbulent one for the Sitka Assembly, with major battles over healthcare, taxes and tax exemptions, art galleries, the herring fishery, and more playing out in these very chambers.

Taking the microphone, Paxton called for a cooperative standard of conduct. He wants to foster civility and trust between Assembly members, with citizens, and with city staff. “We just have to, in this wonderful town, reduce some of the negativity and look for the best in each other rather than the things that bug us,” Paxton said.

Paxton said he also wants Assembly meetings to move efficiently. “Four hour meetings don’t make for good decision making late at night,” he said. He then asked the Assembly to move through routine matters succinctly and proposed eliminating the three-minute timer for persons to be heard, saying he would tap the gavel to encourage a speak to wrap it up. That has not taken effect, but may in the future. 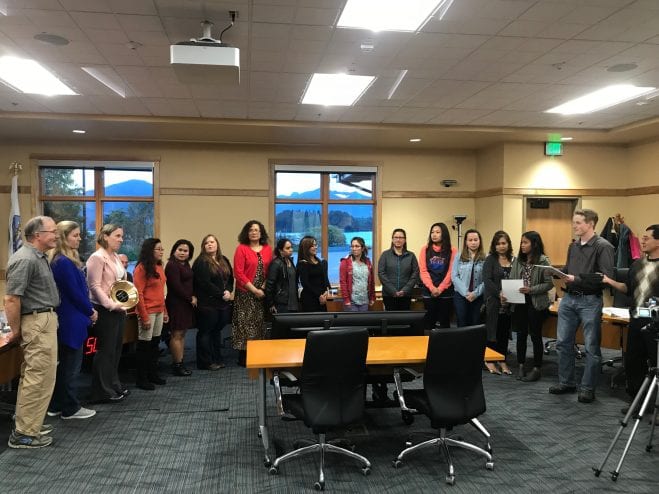 The previous Assembly made it a priority to build a new seaplane base for Sitka. The new Assembly supports that project.

They unanimously authorized City Administrator Keith Brady to procure a letter of commitment from the state to acquire land for the base. The preferred location is on Japonski Island, northwest of Mt. Edgecumbe High School. The land is currently owned by the state Department of Education.

In addition to conveying the property, the resolution states that the project is eligible for 100% federal funding. The city will seek that money through an Airport Improvement Grant from the Federal Aviation Administration. The Assembly also approved, on first reading, appropriating $50,000 from the working capital fund for the “initial stage of acquiring the seaplane base.”

The Assembly also furthered outside funding efforts for renovations Sitka’s Rocky Gutierrez Airport. They passed a resolution in support of the state Department of Transportation seeking Airport Improvement Program grant funding. The city plans to request up to $10 million. The previous Assembly authorized issuing $4 million in revenue bonds for the project, which will be paid  through passenger facility charges ($4.50 for every enplaned passenger)

At the end of the meeting, the Assembly entered executive session from 8:15 p.m. to 9:30 p.m. to receive an update on pending negotiations between the City and Southeast Alaska Regional Health Consortium.

When they emerged, the Sitka Sentinel reports the Assembly announced that the city’s negotiating team would include Sitka Community Hospital CEO Rob Allen and Dr. Roger Golub, representing the hospital’s medical staff. The team also includes City Administrator Keith Brady, City Attorney Brian Hanson, consultants Sarah Cave and Steve Huebner, and legal counsel Sandy Johnson. Paxton said he intends for the city to give updates about the negotiations in open session, adding, “It’s part of my expectation to increase trust.”

Steven Eisenbeisz will continue as deputy mayor, running the meetings when Paxton is out of town. Valorie Nelson was nominated vice-deputy mayor. The Assembly majority favored Nelson over Aaron Bean, whose name was put forward by Gary Paxton.

The 7-member body also divvied up liaison duties among the city’s boards, commissions, and committees: