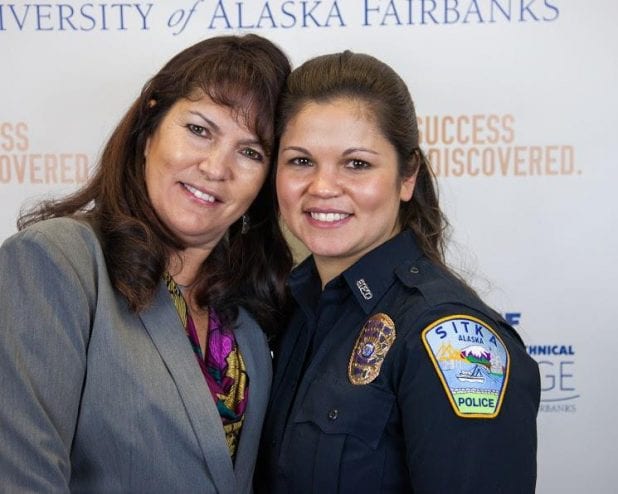 Mary Ferguson pictured next to her sister, Camille Ferguson, during the UAF Community and Technical College Law Enforcement Academy Graduation Ceremony in 2015. Ferguson has working with the Sitka Police Department as a sworn-in officer since 2015. (Photo from Mary Ferguson vs. City of Sitka Facebook page)

A female police officer filed a sexual harassment complaint against the Sitka Police Department on Thursday. 32-year-old Mary Ferguson alleges that throughout her time on the force, she was treated differently because of her gender and subject to sexual harassment by male officers. This is the second lawsuit filed against the department in less than two months. The case raises questions about workplace culture for women within the Sitka Police Department.

Mary Ferguson is the only woman sworn in to the Sitka Police Department. Since joining the force, Ferguson alleges that she was harassed and discriminated against by officers with supervisory power over her job and that her complaints to management were ignored.

Moreover, her suit describes the Sitka Police Department as an “old boy’s club.” In taking action, she says she wants to reform the department for the benefit of future woman officers.

The 18-page brief chronicles her experiences working there and seeks both compensatory and punitive damages.

The problems began in the fall of 2015, when Ferguson was sworn in as an officer. A sergeant was put in charge of her training and had to accompany Ferguson during long patrol shifts. Within weeks, Ferguson alleges he began sending her flirtatious text messages — unsolicited. She responded noncommittally. Her complaint says she feared for her job if she rebuffed the sergeant’s advances.

One day in January 2016, while working the night shift, Ferguson alleges the sergeant propositioned her and said he wanted to kiss her. She tried to move away from him within the patrol car and said, “Please don’t.” The complaint says the sergeant did not force himself on Ferguson and he asked her not to report his misconduct to more senior managers.

After completing her training in March 2016, Ferguson says she felt safe to report those events to Jeff Ankerfelt – then a lieutenant  – but she claims that Ankerfelt did not take action. Later that year, Ankerfelt was appointed Chief of Police after Sheldon Schmitt stepped down. As for the sergeant, he was promoted to lieutenant and is expected to retire at the end of this month.

In the years that followed, Ferguson alleges a string of “non-stop gender discrimination” by male superiors who questioned her abilities and second guessed her work.

The discrimination portion of her complaint talks about one lieutenant in particular, who has made multiple comments and judgement calls based on Ferguson’s gender. The complaint alleges, for instance, that he sought to switch her firearm from a Glock 21 to a smaller gun because “female hands were too small.”

Ferguson took these complaints to Chief Ankerfelt on two occasions, but alleges nothing was done. In June of this year, she brought her complaints to City Administrator Keith Brady. Shortly after, Ferguson was demoted to night patrol on the weekends. Her complaint describes this as retaliation by the police department for trying to bring sexism to light.

On July 17, 2018, Ferguson filed a sexual harassment complaint against the department with the Federal Equal Employment Opportunity Commission (EEOC). On July 27, the city hired investigator Kimberly Geariety to look into her EEOC case and received those results in September. Ferguson was not given a copy of the report. Her lawsuit further states that she then received a letter from the City of Sitka stating that her demotion was for “legitimate business reasons.”

Her lawsuit serves Ankerfelt, the City of Sitka, and the Sitka Police Department. She is represented by James J. Davis Jr. and the Northern Justice Project, an Anchorage-based civil rights firm that is also representing Detective Ryan Silva.

Silva filed suit against the police department in August alleging that he too was demoted when he blew the whistle about the improper procurement of automatic weapons — and for his support of Ferguson in her complaint. The city denies those allegations. According to his brief, the two are in a relationship and now live together.

Reached for comment, city Attorney Brian Hanson said the city has accepted service on this case and confirmed insurance coverage.

In both Silva’s and Ferguson’s cases, Anchorage-based attorneys Michael Gatti and Megan Sandone will represent the city, the police department, and Chief Ankerfelt. At their meeting last week (10-09-18), Sitka Assembly approved increasing the city’s legal appropriations for the Silva case to $110,000.

As for Ferguson’s case, friends and family have launched a GoFundMe account generate social and financial for her lawsuit. So far, that effort has raised over $2,000.