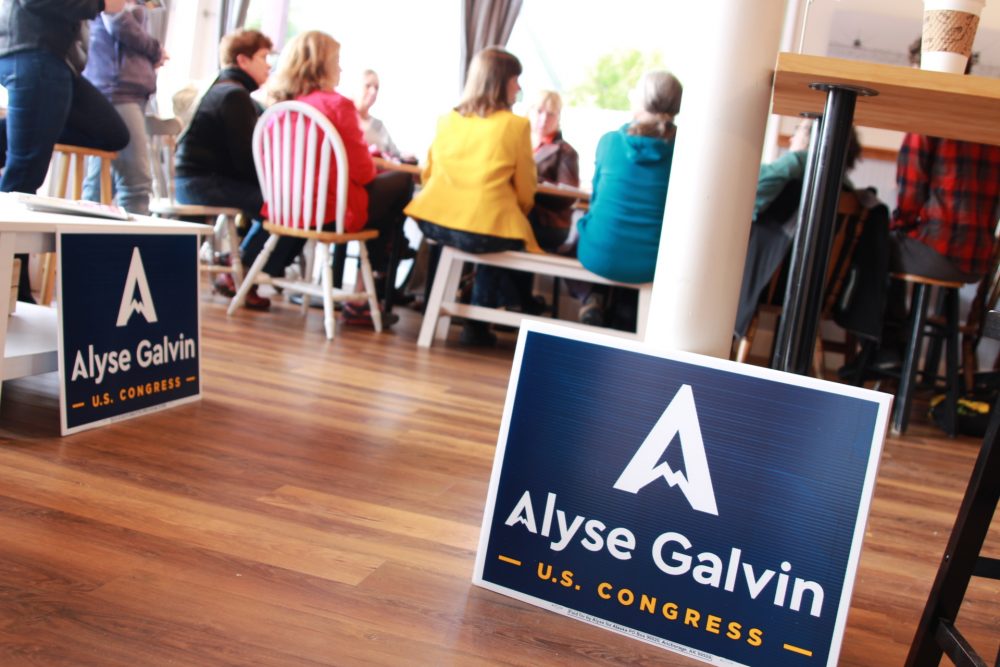 About a dozen Sitkans gather around Alyse Galvin on the morning of Alaska Day inside the Fisheye Cafe. She visited Sitka to participate in the annual parade and attend a Kiks.ádi mourning ceremony at the bottom of Castle Hill but she started her day listening to voters. They intently listen as she delivers the good news to her supporters: the latest polls have placed her just 2 points behind Congressman Don Young, the longest-serving member of the House of Representatives.

But she says she doesn’t owe her popularity to the so-called blue wave.

“I’m an unusual candidate, this time. I am not a career politician by any stretch of the imagination,” Galvin says.

Galvin does not conform easily to conventional ideas about party politics. She belongs to no party, but she won the state primary election on the Democratic ballot. Her husband, Pat Galvin, is a Democrat, but he’s best remembered in Alaska for his service as Revenue Commissioner under Sarah Palin, one of the state’s most well-known conservatives.

Alyse Galvin was born and raised in Alaska but says she has never thought about running for public office until now. Galvin ran a daycare center and managed a hotel in Anchorage in the past. She didn’t begin her political career until she joined a small group of people resisting school budget cuts. That group later became Great Alaska Schools, a non-partisan advocacy group that Galvin chaired for five years. 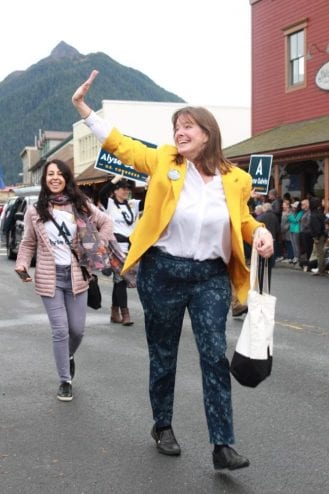 After Alyse Galvin participated in the annual parade on Alaska Day, she joined members of the Kiks.ádi in a mourning ceremony at the bottom of Castle Hill. (Photo by Enrique Pérez de la Rosa)

Galvin says supporters have gathered around her because they’d like to have more trust in their government, not because they’re reacting to conservative politics in D.C.

“People are definitely looking for alternatives to representation because they feel as though somehow what they value is no longer being reflected by their representative’s vote and that’s really what the job is,” she said.

“Given that half of his money comes from PACs, people feel disenfranchised that government is no longer of the people,” Galvin added.

By contrast, about 96 percent of contributions to Galvin’s campaign come from individual voters, according to the Federal Election Commission. And Galvin says she refuses to take any money from corporate PACs.

If elected, Galvin says her first priority would be to lower the cost of healthcare as soon as possible. She sees it as the main impediment to economic growth in Alaska.

“At the same time, we need to work on a larger, real healthcare plan that’s a lot more efficient and effective wherein every person has access to it,” Galvin said.

Galvin also plans to work on funding for port infrastructure projects in Alaska and invest in climate change research. But first she has to close that 2-point gap.