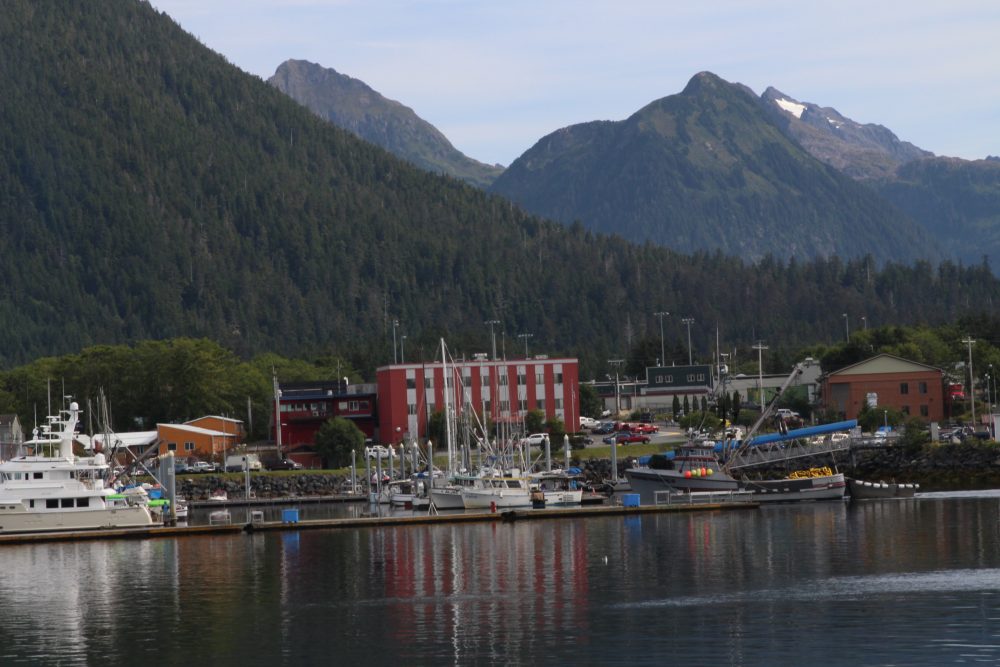 If Lincoln Street is a thoroughfare for storefronts, Sitka Harbor is a channel for maritime economy. The future of several key pieces of infrastructure came up at Tuesday night’s meeting of the Sitka Assembly. (Emily Kwong/KCAW photo)

Work on Sitka’s waterways was a major theme atTuesday night’s Sitka Assembly meeting. They pondered what to do with the city-owned marine service center and whether to require a permit for businesses to set up shop at the Eliason Harbor drive down ramp.

Approximately one third of Sitka’s economic earnings is tied to the ocean and several critical pieces of “blue infrastructure” came up Tuesday night, including the city-owned Marine Services Center. Built in 1991 with federal grant money, the Marine Service Center was long used by Sitka Sound Seafoods and the Seafood Producers Coop to store frozen fish products.

When the lease came up for renewal last year, Sitka Sound withdrew. Without the second tennant, the city-owned cold storage is operating at a financial loss. City Administrator Keith Brady wants to see the whole facility sold. “My philosophy has always been I don’t think the government should be in business of running business. Stakeholders themselves could get together to figure out what they want to do with that building,” Brady said. He recommended the Assembly initiate an RFP process to find a new owner.

The Marine Service Center requires serious maintenance work, particularly on the steel tie rods that support the nearby bulkhead. A 2011 condition assessment said the bulkhead could fail at any time and estimated the fix would be $8.4 million, which the city cannot currently afford.

Assembly members Richard Wein, Kevin Mosher, and Steven Eisenbeisz opposed selling the center, while Assembly member Valorie Nelson said the property should be removed from the city rolls. “I would lean toward wanting to put it on the tax rolls and collect the revenue from the property tax and not continue to realize the liability of the failing bulkhead,” Nelson said.

But Assembly members were largely unwilling to lose the cold storage, as were members of the public. Bonnie Richard recalled how it was built to promote economic development. “It was to diversify our economy in Sitka – to be used by the overflow from Sitka Sound Seafood and SPC and then for other privatized fishermen who were marketing their own products,” Richard recalled.

Rather than move forward with the sale, the Assembly directed City Administrator Keith Brady to reassess the property’s value and cost of the bulkhead fix. He also plans to conduct an environmental assessment, all of which will cost money. The Assembly also asked Brady to meet with stakeholders to talk about the future of the building.

Across from Sitka Harbor, on Japonski Island, the city is also laying the groundwork for a new seaplane base. The Assembly approved – on second and final reading – appropriating $50,000 for the initial engineering. The old seaplane base was battered during a heavy storm in January 2016.

The Assembly also passed, on first reading, requiring commercial users to pay for a permit to do work at the drive down ramp at Eliason Harbor. The permit would cost $500 a year, or $50 for a week, and the revenue would go into the harbor fund to maintain infrastructure.

Right now, the city does not charge companies for their business there. Imposing a permitting system would be a big change for Sitka, one that Deputy Harbormaster Chuck Hackett says is in the city’s financial interest and avoids summertime bottlenecks.”With the permit, we will have a management tool to say, ‘We have [this person] scheduled here. This person is going to do work. You’ll have to go here.’ Guys like to drive down and park and run down to their boat for five or ten minute. This is a tool we can [use to] have that stop,” Hackett said.

Speaking with Assembly Steven Eisenbeisz, Hackett affirmed that vessel users will soon have to pay a fee at the Eliason Harbor loading zone, passed by the previous Assembly during spring budgeting.

Hackett: That [fee] not gone into play yet. That will probably go into play January 1st based on legal.

Eisenbeisz: So the vessel owner will pay a fee to use the drive down dock for work?

Hackett: Yes. There is a 24 hour grace period. They will have 24 hours free to do their business or unload load and then after 24 hours, they would be charged for the length of their vessel if they wanted to stay longer than that.

Eisenbeisz worried that imposing a permit, on top of the imminent fee, would add cost and complexity to small businesses. “[This potentially makes] someone wait longer in getting the work done, if they decide to go down to Wrangell for the winter,” he said.

Would a permit requirement make Sitka less business-friendly? It’s a tough balancing act, given the very real need to pay for city infrastructure. Mosher moved to lower the fee from $500 to $100. Nelson seconded it, but after Assembly discussion, she removed her second. The Assembly passed the ordinance as written on first reading 5 to 1, with Steven Eisenbeisz voting against. Assembly member Aaron Bean was absent.

A second reading is scheduled at the Assembly’s next regular meeting on November 8th. They hope more information and public testimony about permitting at the drive down ramp will bubble up in that time.

Before adjourning, the Sitka Assembly also entered executive session to receive an update on litigation facing the Sitka Police Department. The closed door meeting lasted 25 minutes and when the Assembly reconvened, they did not provide a public statement.