Two of the three candidates vying to represent District 35 in the Alaska House of Representatives met in their first public forum on Wednesday (10-24-18) at the Sitka Chamber of Commerce, and the result was a study in contrasts.

Three-term incumbent Jonathan Kreiss-Tomkins — who was first elected right out of college as a 23-year old — demonstrated his A-student mastery of legislative politics; and challenger Richard Wein, a retired surgeon, brought the passion — and some of the blunt, uncomfortable rhetoric — that won him a seat on the Sitka assembly in his first election bid last year.

Listen to the Sitka Chamber of Commerce Legislative candidate forum in its entirety.

Jonathan Kreiss-Tomkins served in the legislature in the Democratic minority during his first two terms. During the last two years, however, he formed part of the “bipartisan coalition” — a working agreement between Democrats, moderate Republicans, and Independents — which took majority power in the state House.

Coastal Democrats like Kreiss-Tomkins received committee chairmanships as a result. He told the Sitka Chamber that this structure was critical to the political health of Southeast, if a Republican won the governor’s mansion.

“Especially with the possibility of a Mat-Su governorship in the next four years,” Kreiss-Tomkins warned. “Although, who knows what’s going to happen given the events of the last week (the resignation of Lt. Governor Byron Mallott and the withdrawal of Gov. Walker from the re-election campaign). I think on issues of commercial fishing, the ferry system, rural schools, Medicaid expansion — there’s need for a firewall, and checks and balances. It’s certainly my perspective that the bipartisan coalition has been good for coastal Alaska. I think we’ll add some much needed balance to the institutions of power these next two years.” 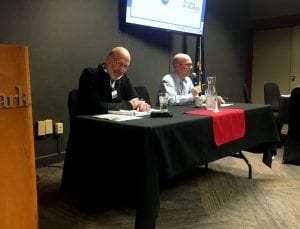 Richard Wein, a Republican, said he’d vote for good legislation without regard to party politics, although his platform of reviving the petroleum industry is a core Republican message this year. Democrat Kreiss-Tomkins stressed that preserving the bipartisan majority in the House was a “firewall” protecting Southeast against the politics of the Mat-Su, especially if Mike Dunleavy wins the governor’s race. (KCAW photo/Robert Woolsey)

Richard Wein has been a surgeon at both the Southeast Regional Health Consortium and Sitka Community Hospital, for a combined 18 years — and locked horns with management at both places. His medical skills were never in question, however, and he’s linked his commitment to public service to the dedication a doctor brings to health care.

“It’s important because I see people, I may say, at their most vulnerable. This way you get to know constituents, in a manner of speaking, in a very unique way. And certainly I believe that this experience over the last 18 years, is something that has helped shaped me, and understand what Southeast is all about.”

Over the course of the hour-long forum, Wein and Kreiss-Tomkins took two very different paths: Kreiss-Tomkins stayed on message with the importance of preserving the bipartisan majority in the House — and the benefits it provided the region — and Wein consistently returned to the idea that prosperity in Southeast Alaska ultimately stemmed from prosperity in the state, and from petroleum development on the North Slope.

The other differences between the candidates were not especially nuanced. On their three key legislative priorities, Kreiss-Tomkins backed core issues like balancing the state budget, improving ferries, and…

“Constitutionalizing the dividend at a sustainable amount, and protecting the dividend itself,” said Kreiss-Tomkins. “I don’t think it’s commonly known that a huge portion of the Permanent Fund is not in a lockbox, the way many of us commonly understand it to be, and it’s actually available for appropriation just the way that $14 billion in savings was. I think taking steps that will protect all that money in a sustainable manners, so that it’s a true endowment in perpetuity, is hugely important.”

Wein, however, reacted strongly to the question’s three-priority limit, given the number of issues facing District 35. He would have preferred to discuss 15, but he put the repeal of SB 91 at the top of his list. The 2015 bill was an attempt at criminal justice reform and Wein — in the most graphic terms — argued that it was not working.

“Why would any group of people — legislators — in essence decriminalize heroin? And why would people be allowed to walk free?” Wein asked. “Such as that young Native woman who was kidnapped, choked, and ejaculated upon — and he’s walking around? And these are the things that when you speak of balance of power in the legislature, I believe that if you have good legislation at the outset that everyone will begin to buy into it, and you won’t have to worry about coalitions and bipartisanship, because people will do the right thing.”

And on priorities, Wein also said that “Education is a big deal,” especially the achievement gap between Native and non-Native students, and that healthcare was one of the “major things driving the economy.”

The candidates answered both prepared questions from the Chamber of Commerce, and audience questions — many of which focused on local issues related to ferry service, the herring fishery, the opioid crisis, and concerns over Sitka’s aging Police Department facility. The candidates were in solid agreement on only one issue: The 12.5-percent raw fish tax proposed by Republican candidate for governor Mike Dunleavy.

Wein, as a Republican, said that he personally would be relentless in stopping the tax. “It ain’t going to happen,” he said.

Kreiss-Tomkins, a Democrat, was on the same page — almost. “It’s not going to happen,” he said, “with a bipartisan coalition.”

A third candidate for House district 35, Petersburg resident Michael Sheldon, did not appear at the Sitka Chamber of Commerce Forum. Sheldon is a registered write-in candidate running as a Republican.