In these coverage maps, green is good. The additional cell towers will improve service to areas where previously there was little to none: Starrigavan Bay and Eastern Channel. The new antennas could be activated as early as January, 2019. (GCI image)

In what the parties are calling a unique public-private partnership, the Sitka Electric Department has just installed five new cell phone towers — on behalf of wireless service provider GCI. The deal could help shave Sitkans’ electric bills by around $2-million over the next 20 years.

Sitka’s electric director Bryan Bertacchi began working on the idea a couple of years ago, as the department searched for new ways to generate revenue.

“As a utility, we’re really good at putting up poles,” Bertacchi explains. “What they do is antennas. And the community wants better cell service. And they certainly want revenue to share in that benefit that GCI gets, so I found it to be the perfect public-private partnership for the community.” 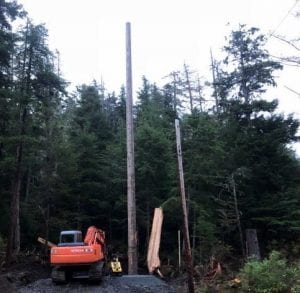 GCI is a telecommunications company founded 35 years ago in Alaska. Spokesperson Heather Handyside says the company has often had to look to creative solutions to improve infrastructure in such a huge region, but she doesn’t think it’s been done quite like this before.

Sitka’s Bertacchi explains that the deal is pretty straightforward.

“We invested $300,000 in capital, but it returns not only $100,000 a year in a lease for 20 years — they also have a big electric load,” Bertacchi says. “Not only will each one of these towers have significant electric load, they’ve put in some switching on Japonski, on top of SEARHC hospital that’s a 400-amp feed. And there’s going to be some property tax involved for their equipment on top of the poles. So, from a community standpoint we’re looking at about $120,000 a year of revenue. So it’s less than a three-year payback on the investment that the community made through the Electric Department, and we get a lot better cell service.”

GCI already has antennas on SEARHC’s Mt. Edgecumbe Hospital, and on the Alaska Raptor Rehabilitation Center. The new towers are going in at the top of Shotgun Alley, on the hillside above Sea Mart, on the old Harbor Mt. Road, Viking Way, and at the ferry terminal. They’ll be discreet — as cell phone towers go — and will resemble Sitka’s existing 60-foot utility poles.

GCI says that the new coverage will significantly improve voice and data — even when a cruise ship is in town. But even though carrier contracts are common in telecommunications, Handyside wouldn’t disclose whether the new towers would benefit Sitka’s local AT&T customers.

And as KCAW found out, Bryan Bertacchi isn’t sure about that either.

KCAW – What about us AT&T customers? Are we going to be left out in the cold?
Bertacchi – You know it’s interesting, I’m an AT&T customer myself, and I would have loved to have made something work with them, but at the time it just wasn’t in the place — it wasn’t in the cards — to make it work. I think it will be interesting for all of us AT&T users — GCI’s service has gotten better already, they’ve done a lot of work on the existing system — but I think by the end of January all five of these sites will be in service. That’s how fast this has gone.

KCAW News reached out to AT&T Corporate Communications in Dallas, Texas, for comment on the issue, but has not yet received a response. Bertacchi plans to update the Sitka Assembly on the project at their next regular meeting, which has been rescheduled to Thursday, November 8.