Sitka couple united in voter accessibility and in life 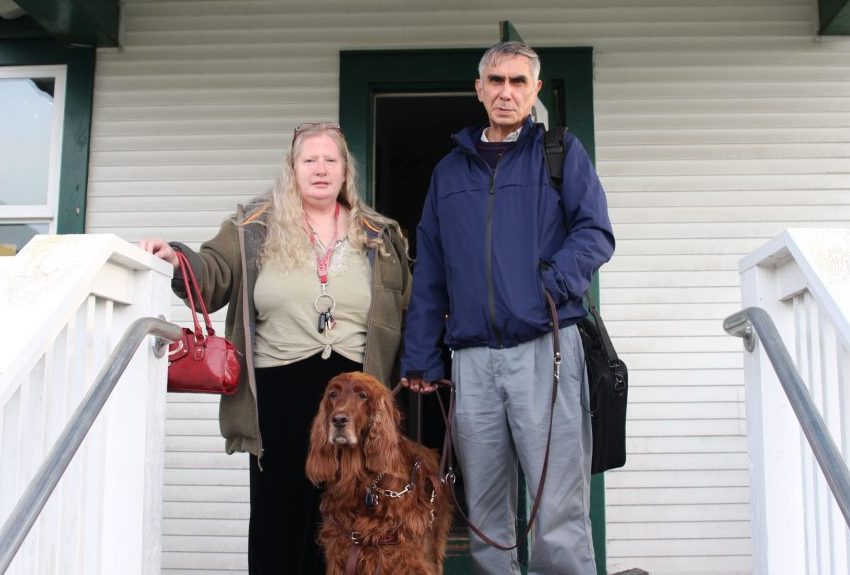 William Craig is legally blind and Helen Craig is legally deaf. Over the decades, they have been strong proponents of voter accessibility. William has filed a complaint with the U.S. Department of Justice to demand that all Alaska locations for absentee in-person voting includes machines for the blind and visually-impaired. (Emily Kwong/KCAW photo)

Absentee voting is available in Alaska through Monday, November 5th, but not all registered voters can cast their ballot. Blind and visually impaired voters in need of special machines will have to wait until election day — and that doesn’t sit well with one married couple in Sitka. William Craig is legally blind and Helen Craig is legally deaf. KCAW reports on their journey for early voter accessibility for all.

Like many couples with deep roots in Sitka, William and Helen Craig met at at a social gathering at Sheldon Jackson. They don’t remember what they talked about that first time, but Helen does remember what William was wearing. “Cowboy boots, white shirt, and then he has a suit jacket on. I tell you he was one handsome-looking guy,” Helen said. “I didn’t know it but I was hooked.” That was 44 years ago.

The Craigs are two of the most politically active citizens in Sitka, which is truly saying something. William is an active Republican and attended the party’s state convention this year as a delegate. Helen is an independent and frequently testifies at the Sitka Assembly meetings, asking members to sign “Yes” or “No” as they vote in American Sign Language so she can follow along.

Helen’s has been deaf since the age of 7 years old from measles, mumps, and rubella. The illness compromised her hearing organs and her balance. “Beach combing for me, I love it. Horseback riding, I love it. Camping. But some of it, I can’t do anymore because I get vertigo. The world is spinning like 100 miles an hour, literally, it’s just a blur and I have to anchor myself,” she said.

The person usually holding onto her hand is William, who often brings his guide dog along — Kalani, a sweet tempered Irish Setter. William has Retinitis Pigmentosa on both eyes, narrowing his field of vision to less than 20 degrees. At age 38, he was diagnosed as legally blind. “There wasn’t very much in the way of ophthalmology in Alaska when I was a kid. I gave up driving voluntarily. Almost ran over a mother with a baby, so that did it for me. I wasn’t going to take any chances,” William said.

The Craigs have had to give up a lot over the years, but one thing they have refused compromise on is their right to vote.

In 2004, following passage of the Help America Vote Act (HAVA), the state purchased accessible voting machines for all polling places in Alaska. These machines display the ballot on digital touch screens, equipped with magnified text and audio cues. At Sitka’s municipal election this year, William was pleased that the machine worked – it sometimes hasn’t in the past – and the city put up a big partition around the machine that allowed him to vote in absolute privacy.

Before all this, William had to verbally dictate his vote to another person — which the Craigs hated then and won’t stand for now.

Helen: There’s been times when he’s had three or four people hovering around him, trying to help. But they’re looking at everything.

Efforts by the state to ship out new machines are not lost on the Craigs. But are they are frustrated by one thing: while many Alaskans can participate in in-person absentee voting – getting those stickers with walruses riding snow machines – the Craigs cannot. Prior to the election, machines for the visually impaired are only available at early voting locations (Juneau, Anchorage, Fairbanks, Wasilla, Nome and Soldotna). None of Alaska’s absentee in-person voting locations have machines for the blind.

Absentee voting is different from early voting. Absentee ballots are collected without verifying the voter’s eligibility. That happens later through a review process.

Williams has filed a complaint with the United States Department of Justice to program the touch screen machines for absentee voting. He wants disabled Alaskans to have access to that part of the voting process. “I’m just continuing to work at it. It may take a legislative fix, as one attorney pointed out, that was put in touch with me about the issues. To that end, I’m contacting a couple of different disability rights lawyer groups about it,” he said.

Lauri Wilson, the state’s region 1 elections supervisor, is aware of the issue. Luckily, Alaska was awarded federal funding to buy new voting equipment. Wilson hopes the new purchase can include more of those touch screen units.  “We’re going to be looking at other options that may be able to incorporate the absentee process in voting as well, but right now, the touch screens aren’t programmed for that,” Wilson told KCAW over the phone.

William is determined to see that change by next election cycle, wanting no excuses when it comes to living a full political life. “It’s easy to get in the trap of letting blindness or deafness or deaf blindness of being in a wheelchair define your whole life for you, or you can simply accept that it’s an issue to deal with and get on with living,” he said.

Technology has made that even easier. Helen now has cochlear implants now. She can hear music again. She signs for me the word change. It’s two fists, changing places in the air.