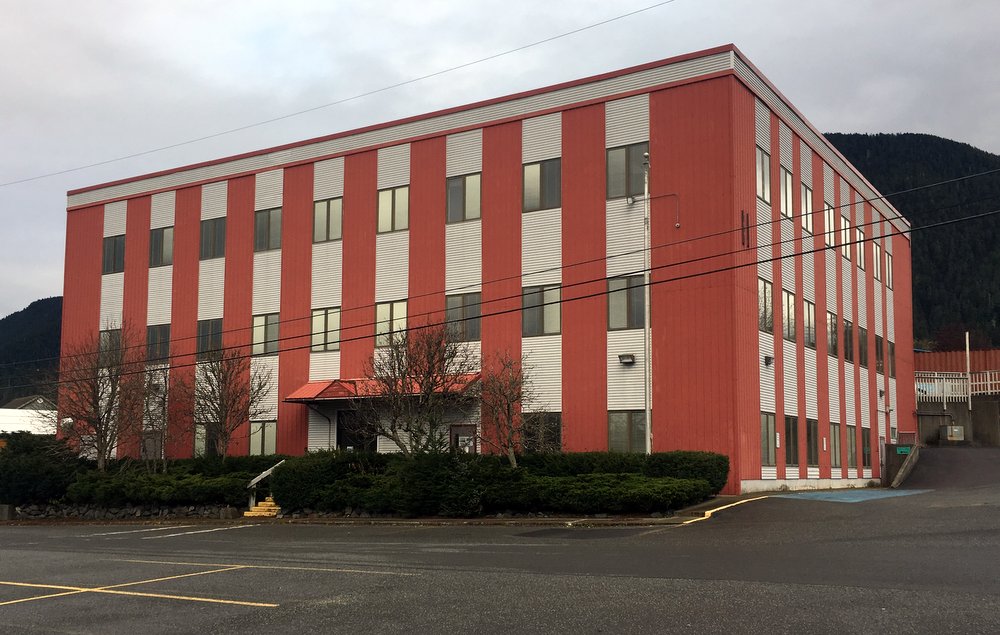 The former district headquarters of the US Forest Service will become the new home of the Sitka Tribe by early spring 2019. The STA made at least two offers before being accepted. The 25,000 square-foot building was assessed (for property tax purposes) at $520,000 under the ownership of K&R Enterprises. The Sitka Ranger District last year moved into smaller quarters across from Sandy Beach. (KCAW file photo)

The Sitka Tribe of Alaska is continuing to mobilize resources to benefit the broader Sitka Community — and not necessarily just tribal citizens. Its Social Services Department has just won national honors from the Kennedy School of Government at Harvard University.

Tribal Council Vice-Chair Lawrence “Woody” Widmark this week (10-31-18) filled in the Sitka Chamber of Commerce on the Tribe’s extensive activities, including a planned move to new offices.

Woody Widmark has been into so many things over the past 25 years in Sitka — especially Community Schools and youth sports — always wearing the orange and black of his favorite baseball team, the San Francisco Giants.

For a man of famously few words speaking on October 31, he dropped the perfect one-liner:

“Happy Halloween. These are my colors every day.” 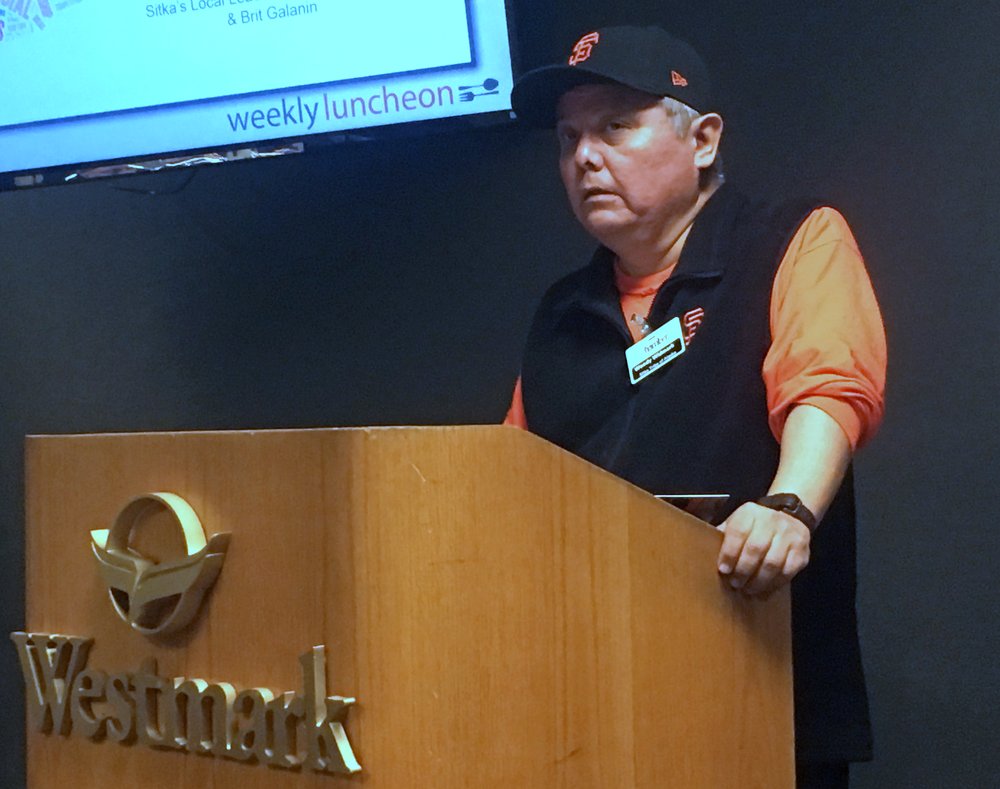 The Sitka Tribe of Alaska is federally-recognized, and a sovereign government of its own within the United States. Widmark explained that it has 4,000 enrolled citizens, about half of whom live in Sitka.

It’s budget this year is just over $10 million — around half as much as Sitka’s General Fund, or the Sitka School District. He described the Sheetka Kwan Naa Kahidi as the gem of the Tribe’s civic presence, but another significant achievement has been less visible — unless you found your way to Sitka National Historical Park this summer.

“We have a partnership with the National Park Service, a contract if you will, with Totem Park (aka Sitka National Historical Park) having interpretation people there throughout the summer,” Widmark said. “That’s been in our strategic plan for about 20 years. Not too many tribes have done this — I think we’re one of the first in the country. There have been agreements within the park service and the Department of the Interior on other things, but having co-management is a big deal through Indian Country. So it’s kind of scary for both parties because it’s a first, and we’re paving the trail for other tribes to do this in partnership with other parks. There’s been some hesitancy on both parts because it hasn’t really been done.”

Interpretive management at Sitka National Historical Park is the most recent program at the Tribe. Widmark discussed the Tribe’s partnerships with the Forest Service, the Senior Center, the Community Ride, the Baranof Island Housing Authority (the STA appoints the board of governors), and the Southeast Alaska Regional Health Consortium (the STA holds a seat on the SEARHC board).

He said that the Tribe has been able to leverage partnerships to bring grant funding into Sitka — funding that benefits the entire community: $900,000 from the US Department of Justice Office on Violence Against Women, which will provide pass-through funding to the Sitka Police Department for an additional officer, and $600,000 to administer legal assistance; and another $600,000 from a US Housing and Urban Development Indian Community Development Grant to help fund the expansion of the SAFV Shelter. Widmark said that the Tribe also put money into youth sports programs like the Baranof Ballers, Little League, the Barracudas, and into the ANB/ANS community dinners, and other similar community support to the tune of $245,000 a year.

What the Sitka Tribe of Alaska has not yet done, Widmark explained, was take an official position on redesigning the Alaska Day Holiday to be more inclusive of Alaska’s indigenous cultures. But he didn’t rule it out.

“We don’t have an issue with the city,” Widmark explained. “History is what we’re looking at. The Tribe — in no circumstances — has come out with an official statement. It’s been going on for a long time, but I think the Tribe can do some things to enhance it. It’s been quoted in the paper and in local media the past couple of years — not recently, but with our former general manager, and the Council didn’t say that. I’m trying to be transparent-but-not-transparent at the same time. (Laughter) But I wanted you to know that if the Tribe did make a statement it would come from our the Tribal chair.”

During his formal presentation Widmark mentioned that the Tribe’s Social Services Department was honored recently by Harvard University’s Kennedy School of Government for its implementation of the National Indian Child Welfare Act — sometimes called “NICWA.” The STA was one of six finalists honored nationally for its program, which has the lowest child removal rate in the nation, and a 100-percent intervention rate, which, according to a news release, “has not allowed even one tribal child to be lost in a child protection system.”

And the Tribe’s other big news came up during questions from the Chamber audience: The STA is poised to move from its current cramped quarters on Katlian Street to the former US Forest Service headquarters at Thomsen Harbor.

“It’s going to become a reality,” said Widmark. “We’re going to try to get our Tribal Court there — everything there in one room, rather than scattered all over the place. So it’s a big deal. Thank you for bringing it up.”

Widmark didn’t mention a timeline for the possible move, but he said that the Tribe would plan an Open House when the time came.

Note: In a follow-up call, STA General Manager Lisa Gassman said that the Tribe should close on the purchase of the building in November, then renovate, and reopen within four months.