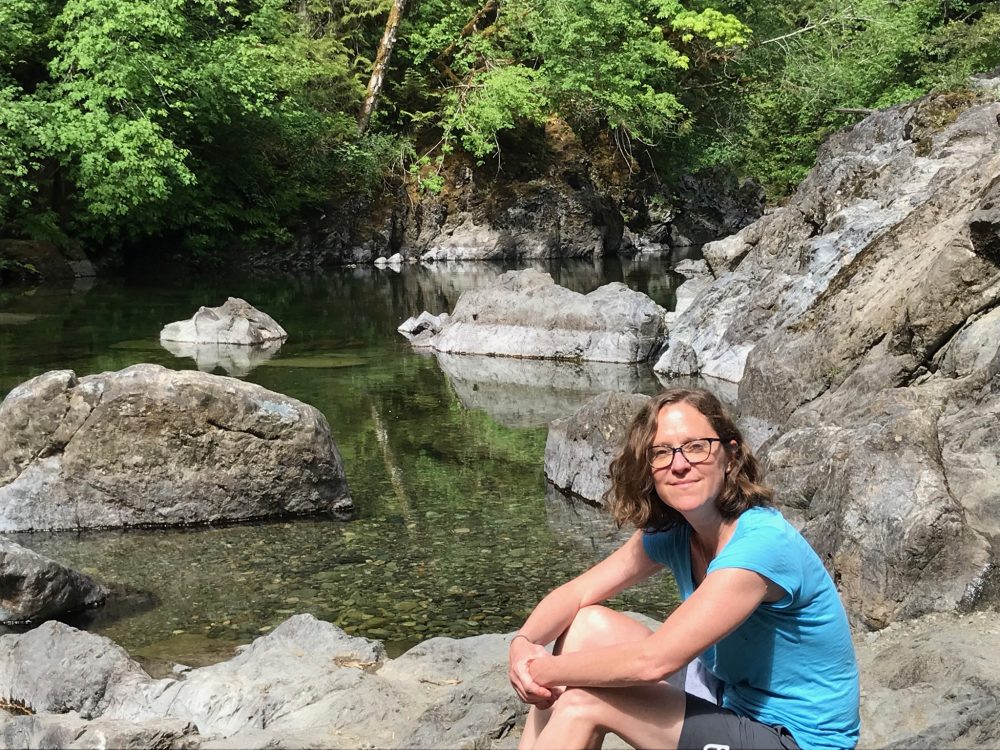 Dr. Rachel Lauer was the Sitka Sound Science Center’s first fellow this year of its Scientists in Residence Fellowship, which brings scientists from all over the country to Southeast Alaska to collaborate with local scientists and present their research to Sitkans. (Photo courtesey of Rachel Lauer)

A geophysicist based in Canada was in Sitka for the month of October, learning how to better explain her work to people.

Dr. Rachel Lauer studies the subsurface movement of groundwater in the ocean floor — how it’s affected by the movement of geologic faults, and how it’s related to phenomena on land, like landslides.

Every year, the Sitka Sound Science Center brings scientists from all over the country to Southeast Alaska through its Scientists in Residence Fellowship. The fellows stay for one month at a time and are given space to work and collaborate with the Science Center on their latest projects.

The latest scientific mind to come to Sitka through the program belongs to Dr. Lauer. She’s an assistant professor at the University of Calgary in the geophysics program that conducts research around the forces at play during earthquakes and tectonic plate movements.

Dr. Lauer’s research focuses on the processes that move and produce fluids below the sea floor, especially near faults like the Queen Charlotte system. Her expertise is in developing predictive models of fluid flow and using electrical resistivity to track the migration of gases in the subsurface.

Her Sitka residency was Dr. Lauer’s first look at the remarkable geology of Southeast Alaska.

“When you have this unique topography of mountains juxtaposed next to the ocean, you actually have the source of a lot of your groundwater here in the high elevation parts of the mountain that is actually hydraulically connected to the water that I study,” Dr. Lauer said.

Dr. Lauer said research on subsurface fluids can help us better understand what forces are at play when disasters like earthquakes and landslides hit, disasters like the 2015 landslide that killed three people in Sitka.

“This landslide is definitely tied to groundwater and fluids and fluid pressure,” she said.

The Science Center’s residency program also provides ample opportunities for scientists to engage with Sitkans and share their research in places like classrooms and – in Dr. Lauer’s case – whale-watching boats during WhaleFest.

Dr. Lauer said she doesn’t get to do that often enough and wishes academia would spend more time teaching scientists how to talk to non-experts. Most people don’t know much about the subsurface movement of fluids in the sea floor, but Dr. Lauer discovered that with the right approach, an audience will want to learn more.

“It turns out there’s a lot of different approaches you have to be cognizant of when you’re doing public talks,” she said. “Not everyone in the room has the same background.”

But according to Dr. Lauer, Sitkans make for a special kind of audience.

“It turns out in Sitka, there’s a lot of really bright and engaged citizen scientists which is really cool. I think there were 30 minutes of questions after my talk which never happens in academic settings.”

Although she hopes to expand her work someday into Southeast Alaska, for this visit at least, Lauer is taking newly-honed communication skills — rather than data — back to her colleagues in Calgary.