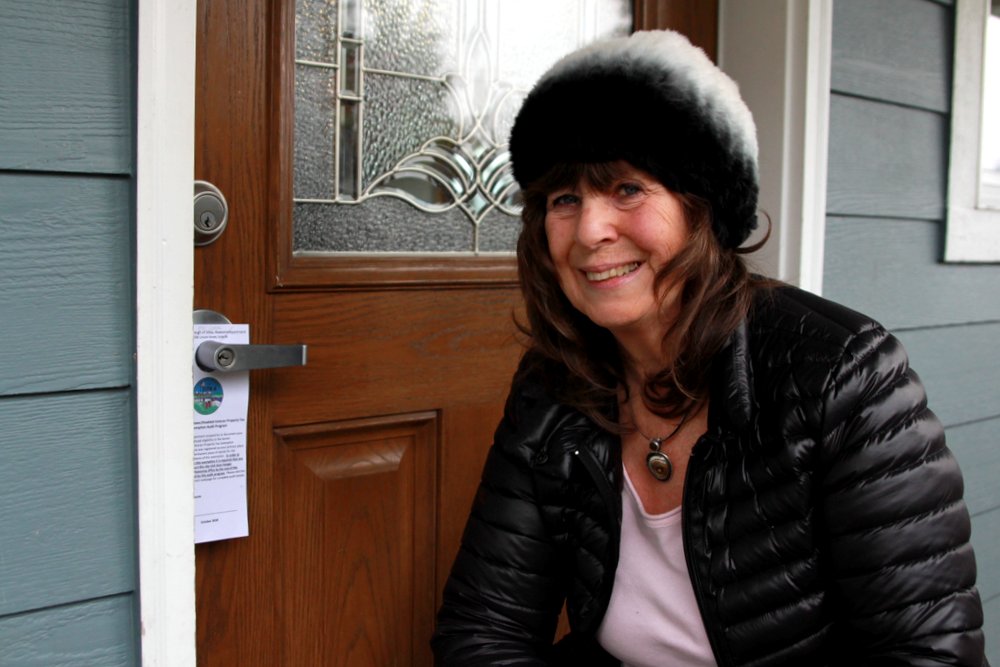 Sitka resident Mary Todd Anderson — like all senior Alaskans who qualify — is exempt from paying property tax on the first $150,000 of value in her primary residence. In Sitka, that amounts to a $900 discount on her tax bill. “It should be tightened,” she says, “but coming to my house 12 times is punitive and intrusive.” The city, however, is striving for fairness and accuracy: It’s already found 8-percent of those claiming the exemption aren’t eligible. (KCAW photo/Robert Woolsey)

The City of Sitka is performing an audit of homes eligible for property tax exemptions, and at least one senior is crying foul.

Mary Todd Anderson is hoping others join her in opposing the city’s plans to visit her home once a month for an entire year, to ensure that she’s actually living in her exempt property.

Note: The Sitka Assembly will discuss the Senior Citizen Property Tax Exemption as an agenda item toward the end of its regular meeting Thursday, November 8.

Chances are you’ve never heard about a property tax audit program quite like the one Sitka is using. The local assessing department doesn’t just review paperwork. Someone actually shows up at your house — once a month for a year.

“Twelve monthly checks that they come to your door in the first two weeks of every month. And if I’m there, they just identify who I am: Hi, you’re Mary Todd Anderson? Great, we’re on our way.”

For Mary Todd Anderson there’s nothing “great” about this audit technique.

“If I’m not there they hang a notice on the doorknob that says I have basically until the end of the month to come in and identify who I am and sign off, in essence, that I’m Mary Todd Anderson.”

Sitka has started this face-to-face audit program because it can. Anchorage, for instance, exempts 16,000 homes from property taxes. In Sitka, there are only 590 homes in the property tax exemption program, and only a randomly-selected ten-percent of them — 59 — are being audited. 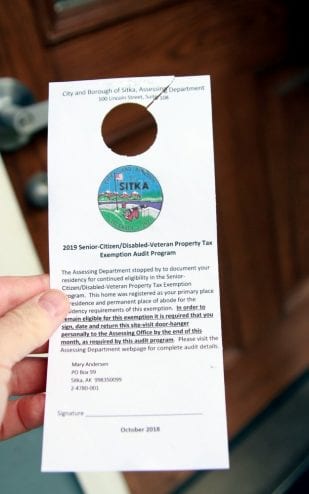 Seniors (or disabled veterans) who are in the exemption program and who have been selected for the audit will receive this door hanger if no one responds to the knock. Recipients have until the end of the month to sign and return the hanger to the assessor’s office, or risk disqualification from the exemption. (KCAW photo/Robert Woolsey)

“It takes one-to-two days to distribute the door hangers or knock on the door. It’s not an administratively burdensome task,” said Wendy Lawrence, Sitka’s assessor. She’s got a lot on her plate already, without going door-to-door to make sure people who are getting a break on property taxes really qualify for that break.

“It does require that I’m not doing my other tasks,” said Lawrence, “So I will consider maybe modifying that as we move forward because in actuality, relying on the PFD information should be adequate.”

The PFD. To qualify for the senior property tax exemption, you must be 65 years old and have lived in the state for a full year before applying. You also can’t be gone for more than 180 days in any subsequent year, without a qualifying reason like a medical emergency. Sound familiar? Except for being 65, everything else about the property tax exemption mirrors the requirements for receiving the Alaska Permanent Fund Dividend.

The state provides Lawrence with a list of Sitka residents eligible to receive the PFD — a list that is roughly two years out-of-date. (According to Lawrence, at the end of the current audit period in January, 2020, she will have received PFD application data for 2019 — which reflects an applicant’s status for 2018.)

Following state law requires her to be fair and equitable in administering the property tax exemption in Sitka. It’s her own work ethic that compels Lawrence to be accurate. Hence her desire to put “boots on the ground.”

“I decided to do it in this manner because it is the best way to determine the residency portion of it,” Lawrence explained.

The audit period began in Sitka on October 1, when the 59 residents in the sample — including Mary Todd Anderson — received formal notice that they would be required to reapply for the exemption, and to expect the monthly visits. Already, Lawrence has an 8-percent out-of-compliance rate.

Mary Todd Anderson wants to play by the rules, and thinks others should too. She’s not opposed in principle to being audited.

But the door-to-door audit seems over the top to her — she calls it “punitive.” The documentation accompanying the audit is extensive, and Anderson believes some seniors will feel threatened by it. She doesn’t know who else is being audited, but she believes many others share her concern.

“It’s hard to get a list of who’s being audited — they’re not going to give it to me. So I have to just go by hearsay and if I hear someone’s being audited I go talk to them, and yes they find it very invasive, very intrusive. And they’re scared.”

Lawrence doesn’t feel it has to be that way. The audit is coming when the state government is in budget trouble, and Sitka is energetically looking for new sources of revenue. Despite the economy, home values — and property taxes — are steadily climbing.

“It’s nothing personal,” Lawrence said. “It’s simply my job as the assessor to be nonpolitical and to administer the program. It’s unfortunate that it’s coming at a time when things are really getting tight. I watch the market, I understand the market. Things are getting tough and I understand that.”

The Senior Citizen/Disabled Veteran property tax exemption is state law. It started in Sitka and elsewhere in 1972 with just a handful of homes. Up until 1987, the state reimbursed communities for tax revenue they lost under the program.

Currently, Sitka exempts 590 homes, which costs the city about $500,000 a year in taxes. For individual homeowners who qualify, the exemption is worth up to $900 a year.