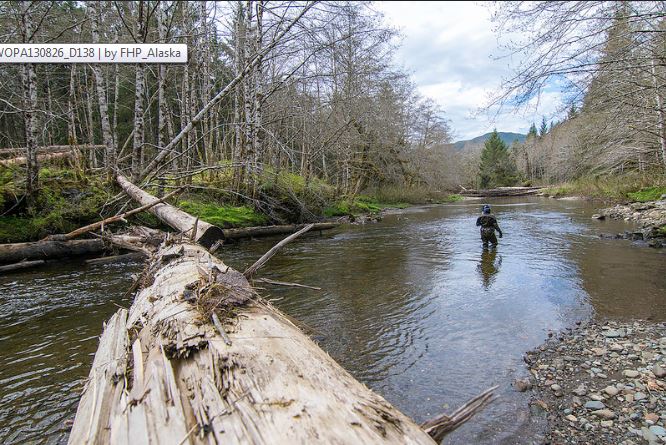 A volunteer from the Sustainable Southeast Partnership checks a stream on Prince of Wales Island. Although it now has a name, ‘habitat monitoring’ is something Alaskans do on almost a daily basis. NOAA’s Integrated Ecological Assessment study will look for ways to incorporate human experience and observation into the large amounts of data used by fisheries managers. (Flickr photo/Bethany Goodrich)

Everyone who fishes likely has had personal experience that doesn’t exactly square with the projections of Fish & Game. In fact, fisheries management in Alaska is almost entirely a numbers game in which ordinary peoples’ observations, expectations, and knowledge play no role at all.

That could change. The National Oceanic & Atmospheric Administration and the University of Alaska are involved in a study that they hope leads to the integration of human experience into fisheries management.

Note: NOAA researchers will meet with interested Sitkans on three occasions this month: The first is a public forum to discuss the Integrated Ecosystem Assessment project’s work so far, and to share concerns 6 p.m. Tuesday, November 13 in Harrigan Centennial Hall. On Wednesday, November 14 there will be two workshops at the Sitka Sound Science Center, from 9 a.m. to noon, and 1 to 4 p.m. to identify indicators of community well-being related to fisheries, and to reach consensus on a single conceptual model for the ecology of the Eastern Gulf of Alaska. Everyone is welcome.

Last year in a story produced by National Public Radio’s Melissa Block for her series Our Land, Sitka troller Charlie Wilber was asked if climate change was affecting his ability to harvest king salmon. 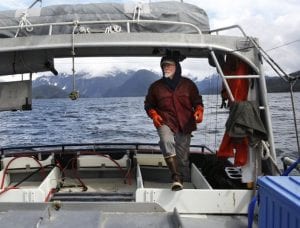 Sitkan Charlie Wilber has fished for salmon in Southeast Alaska for almost 40 years. He’s observed gradual changes in the environment related to warmer ocean temperatures, like the migration of southern species into the North Pacific. NOAA is being asked to quantify the knowledge of Wilber and other Alaskans. (NPR photo/Elissa Nadworny)

“It’s really hard to pin it down to say this is climate change, but things are definitely changing.”

Wilber, like almost all of us, isn’t qualified to speak on climate science. But nearly four decades on the water have made him — and Alaskans like him — a top expert in his own environment.

“Fishermen have a vast understanding of their local marine ecosystem and their fisheries because they’re highly dependent on them.” she explains, “And they know these things to a degree that’s really hard for us to understand and capture to the same degree.”

But you don’t have to be a career fisherman to connect with the ecosystem. When a fishery has a poor season, everyone feels it in different ways.

NOAA, or the National Oceanic & Atmospheric Administration, is the scientific agency that supports the North Pacific Fisheries Management Council. The council oversees fishing in the Gulf of Alaska beyond the state limit, for species like black cod and halibut — both of which are of major importance to Sitka.

Szymkowiak says the council is pressing NOAA to provide indicators of community well-being that reach beyond direct economic indicators — or the kinds of harvest and market data traditionally used to manage fisheries. And so the Integrated Ecosystem Assessment model was designed, and Sitka was chosen as the site.

“Sitka is one of the most important fishing-related communities in Alaska. And it’s a unique community in terms of its fishing fleet, in terms of its people, the economic and environmental vulnerabilities it currently has,” says Judith Rossellon, a biologist with the University of Alaska Fairbanks who is teaming up with the social scientist Szymkowiak to develop the Integrated Assessment Model. They both visited Sitka in April to define the links between community well-being and the fisheries; they’re coming back this month to figure out how to measure them.

The goal is to introduce human metrics into the data-rich science of fisheries management.

“It’s not going to change the way we manage the fisheries tomorrow,” Rosselon said, “But it’s definitely going to add pieces of knowledge to the current management process. And with that knowledge, we can start doing better and more-informed fisheries management.”

And that means managers might begin to understand the data that Alaska’s subsistence, sport, and commercial fishermen like Charlie Wilber have been collecting every time they leave the dock.