At SHUX, Sitkans search for the next great board game 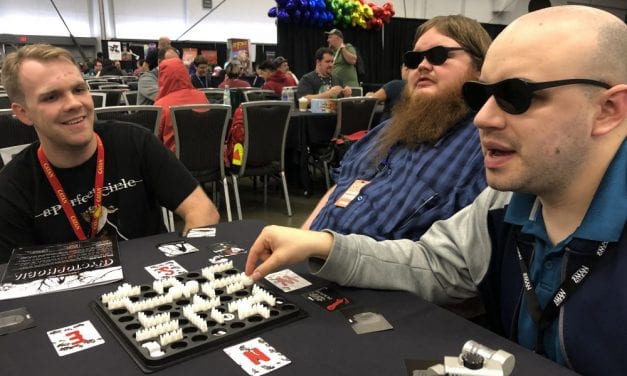 The tourism season has come to a close and that means that things in Southeast Alaska are slowing down for the winter.  Some spend their winters adventuring in warmer places, vacationing on tropical islands, trying to miss as much of the rain and cold as they can. But a group of Sitkans decided to take a vacation to an equally cold and rainy place- Vancouver, B.C. for a board game convention. KCAW’s Katherine Rose reports.

Inside a gargantuan convention hall in the middle of hundreds of tables covered in black tablecloths sit groups of 4-5 conferring amongst themselves. At one of those tables, a handful of Sitkans are in their own world, wandering through some imaginary woods, trying to escape from a vicious axe murderer.


They’re playing Nyctophobia, a board game where players never actually see the board. They wear plastic blackout sunglasses, as one player who CAN see guides their hands. They feel each piece on the board, stumbling blindly through the forest looking for rocks, stopping at trees, and desperately searching for the car so they can escape.

“Would you not panic in this situation,” continues an exasperated Seaton Bryan, and the group laughs.

They’ve traveled to SHUX, a convention for tabletop gamers to gather and try some new board games on the market. In its second year, SHUX is put on by Shut Up and Sit Down, a team of people who review board games professionally on Youtube and they produce some of the most popular podcasts and videos in the tabletop gaming community. Bryan relies on their reviews to decide what games to add to his growing library.

“I’ve been playing board games religiously since high school. Started with some basic stuff,” he says. “But, BUT, I have around 200 games now in my collection, just as many kinds as possible.”

While Bryan has been into it for a while, many more people are dipping their toes in the tabletop world. Board games have seen a massive resurgence over the past ten years. SHUX cofounder Matt Lees has a theory about why the market is booming.

“I think personally it’s that people are starting to self moderate a little bit. Our lives are becoming increasingly digital and people are looking for ways to step away from that,” says Lees. “Still spend time with people, still spend time thinking about complex puzzles and stuff, but just away from screens.”

With a growing demand, the market is flooded with new games that appeal to every level of gamer. In the SHUX expo hall are games like “Fog of Love,” a two person role player that simulates a relationship in a romantic comedy, to a game called “Chai”, where you actually play a tea merchant trying to “brew the perfect blend of tea.”

“It’s very exciting for us because we think that lots of people grew up playing board games that were, frankly, a bit bad,” Lees says. “Monopoly is only fun if you’re winning, which means that 75 percent of people playing aren’t having a good time.”

And it’s not just about loading up on new cardboard. For people from a small town like Sitka, it’s nice to be able to come to a seemingly never-ending convention hall, filled with 2000 people in the building that share their passion for tabletop gaming. For Bryan, it’s a welcome opportunity.

“Just being able to run into people that saw what game you were playing and say “Oh I love that game!” or do that yourself, walk around, see something you’ve never played before, sit down and find out, it’s amazing!”

Surprisingly, board game culture has roots in Southeast Alaska. In Juneau, Jack Eddy runs a board game review site of his own, The Cardboard Herald. He produces podcasts and videos, and he’ll likely have a table at Juneau’s own growing board game convention in January, Platypus Con, which is in its fifth year. He let me in on a little secret about Sitka’s own celebrities.

“You may be interested to know that two of the original Magic the Gathering artists are actually from Sitka Alaska,” Eddy says.  “Anson Maddocks and Mark Tedin, they actually met at Sitka elementary school, and went to college together.”

That’s no surprise to Eddy, who thinks Southeast is the perfect setting for breeding creative energy and fostering human connection.

“I think it’s that we have a desire for interaction. Particularly in Southeast, we’re a really artistic community and a community oriented community,” Eddy says. “The level of participation in any sort of community event seems like way higher per capita than anywhere else.”

And back at SHUX, Matt Lees has an idea of why Southeast Alaska may have a strong tabletop gaming culture.

“It’s really unsurprising to me that a group has come all the way from a place where, in the winter it’s boring and dark. I think lots of people who get into board games do so for reasons like that. Maybe they’re having a difficult time in their life, maybe they’re having issues with mobility, maybe they’re living somewhere where you can’t go out and have a good time outside,” Lees says.  “People gravitate to board games for different reasons but when they find them they really stay. I think more people should give it a go, because it’s brilliant.”

And Bryan and his friends did give it a go – they left Vancouver with suitcases full of board games, back to Sitka stocked up on cardboard and prepared for the winter.