With election of Dunleavy, is climate action team out in the cold? 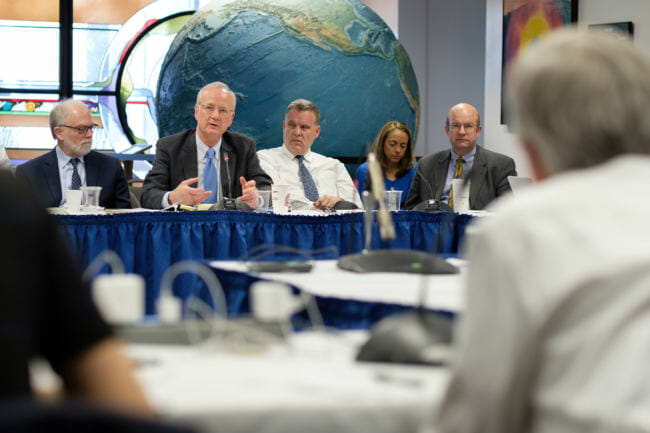 The future of the Walker Administration’s Climate Action Leadership Team is in limbo with the election of Mike Dunleavy. DEC Commissioner Larry Hartig speaks to other members of the team on the University of Alaska Fairbanks Campus, April 12, 2018. (Photo courtesy of David Lienemann / Office of Governor Bill Walker)

With the election of a new governor in Mike Dunleavy comes many unknowns for Alaska and among them is his administration’s future plans for climate change action. Several Sitkans were involved with a statewide Climate Action Leadership Team (CALT) this summer, organized by Governor Bill Walker. Their plan now hangs in limbo.

In September, a group of Alaskans handed Governor Bill Walker a 37-page playbook of policy ideas for climate change. Some ideas were focused on reducing the state’s carbon footprint, others sought to help villages with eroding coastlines. They even suggested researching a state carbon tax. And their document begins with a declaration that says, “the state has an obligation to take bold action.”

Compare that to the words of now Governor-Elect Mike Dunleavy during the debates. He was asked, “The Arctic is warming twice as fast as the rest of the planet. As a state whose economy relies on fossil fuels, how do you balance that with the need to reduce carbon emissions?”

Those remarks have many on the leadership team fretting about the future of their climate change plan. Lisa Busch is the Director of the Sitka Sound Science Center and one of two Sitkans on the 21-person team appointed by Governor Bill Walker. He created the team through Administrative Order 289.

Busch sees their work as a call to action across every sector of the economy and every level of government. “It really is just a start of our state trying to be a leader in the nation for decreasing gas emissions,” Busch said.

Administrations past and present has been making subtle changes since 2007. That’s when then-Governor Sarah Palin created a climate change sub-cabinet that continues to meet. Busch was pretty delighted to discover that.

“The state agencies have been working on this stuff for a while. Since 2014, the state has a no-idling policy for state vehicles. They are thinking about resiliency and sustainability in every new road construction project. They are studying alternative fuels for the state vehicle fleet. They’re already doing quite a bit,” Busch said.

The Climate Cabinet that took all of the team’s climate change recommendations into consideration and issued an Early Actions Plan — cherry picking stuff the state can do right now. Their priorities included tasking ADF&G to create a cooperative analysis that identifies “potential impacts to Alaska fisheries from climate change and ocean acidification.”

But the election has changed all that. Walker is out. Will this climate action plan — and the team that wrote it — continue under Governor-Elect Dunleavy? His transition team isn’t sure. Spokesperson Sarah Erkmann Ward wrote in an e-mail to KCAW that the Governor-elect is busy building his administration and that it was “too early to know.” Prior to the election, he told KTOO, “I think we have a lot of issues that, in my opinion, are quite frankly and bluntly more important than the climate task force.”

Young people who have studied the plan certainly hope it continues. Zofia Danielson of Sitka and Carly Dennis of Anchorage attended a climate action dialogue for young people this summer. In that room, consensus seemed possible.

Danielson felt the plan could be worded even more strongly. “We should turn those shoulds in the climate plan – the language that wasn’t quite as strong as it should be – to musts,” she said.

Dennis was pleased to see the state reaching out to young people for input. She noted, “The youth voice is really important in that obviously, because young people are going to be the ones most affected by climate change.”

Since following the debates, Dennis has been concerned with Dunleavy’s attitude towards climate change science and action. She wrote in an e-mail to KCAW, “His complete disregard for climate change as a legitimate threat to our state shows a real disconnect with Alaskans.”

Those on the Climate Action Leadership Team have not met since the election and are in the dark about whether their work will continue beyond this year.

The other Sitkan on the team is Linda Behnken of the Alaska Longline Fishermen’s Association. Her world is one where ocean acidification and rising temperatures are harming fish — and fishermen. I asked her what the worse case scenario was for the next administration.

Behnken: Is that we ignore what’s happening and allow the situation to get worse and not acknowledge the significance of these impacts.

KCAW: What would you do if [Dunleavy] were to reverse the administrative order and dissolve the team [Climate Action Leadership Team]?

Behnken: Well, I think all of us here in Alaska have an individual responsibility to addressing climate strategy through whatever strategy is fit with us, whether it’s the local level, state level, or national level. I certainly will.

Best case scenario, Behnken said, is that after Dunleavy is takes the oath of office in December, the Climate Action Leadership Team stays in place and continues their work.